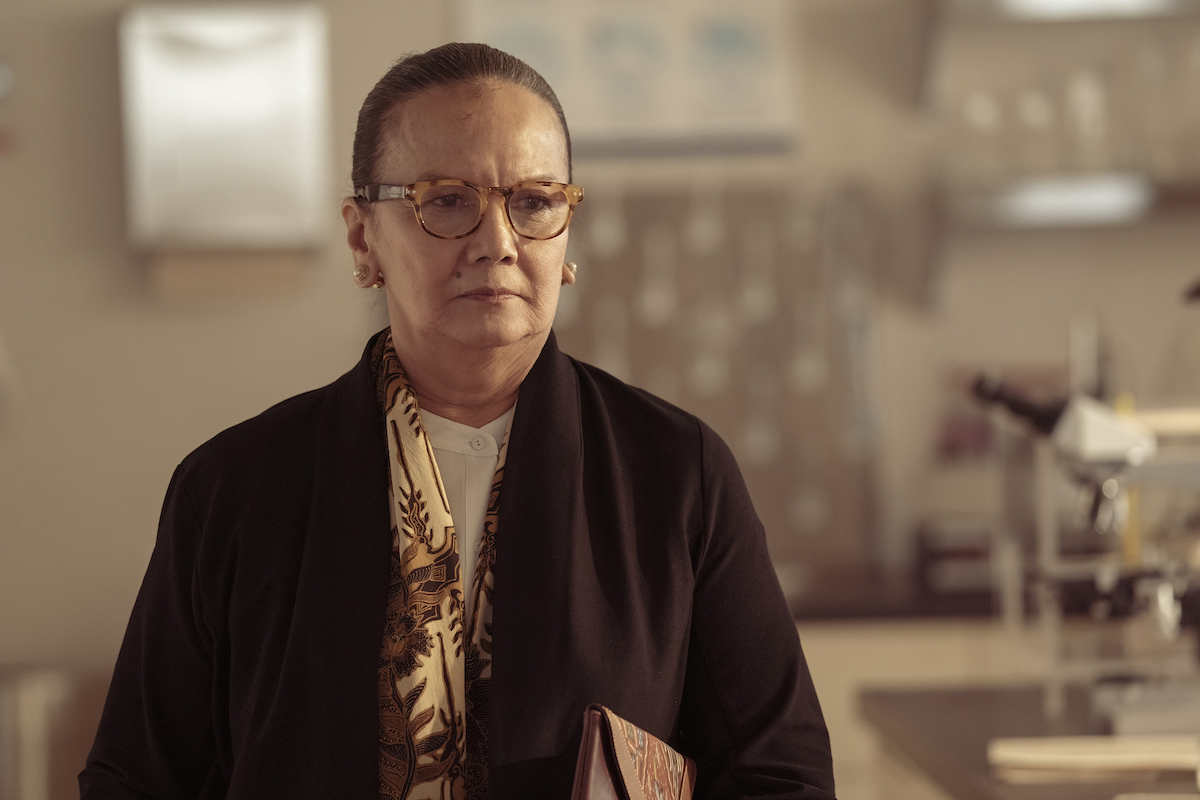 Episode 2 of The Last of Us starts in Jakarta, Indonesia, when mycologist Ibu Ratna (Christine Hakim)’s lunch is interrupted by men in military uniforms. Ibu Ratna is taken to a lab where she’s shown a peculiar sight: cordyceps fungus growing in a sample of human tissue. Next thing we know, Ibu Ratna is outfitted with a pressurized suit so that she can examine the body it came from.

We know roughly what she’s going to find in the body, but the revelation of what a cordyceps infection looks like—along with the infection’s final form, revealed later in the episode—is body horror at its most exquisite and revolting. But what makes this particular horror genre so compelling?

When Ibu Ratna finds the bite mark on the corpse’s ankle, she takes a scalpel and slices the skin to reveal something terrifying: there’s nothing but fungus underneath. Any remaining human tissue is buried under a dense mycelial web. The thing in front of her still looks human, but it’s becoming increasingly clear that even before being executed, the person who lived in it was long gone.

But the worst discovery is still to come. Ibu Ratna moves up to the corpse’s mouth and sticks a pair of tweezers deep into its throat. When she pulls the tweezers out, she finds that she’s pulled out a tuft of fungal tendrils—and as she stares at them, the tendrils suddenly come to life and strain for her face. Ibu Ratna gasps, flees the room, and later says that the only way to contain the infection is to bomb Jakarta. There’s no medicine and no vaccine. Cordyceps is unstoppable, and it’s coming for everyone.

Later in the episode, Joel, Ellie, and Tess sneak through a museum to avoid a horde of the infected on the streets. In the museum, we get our first good look at the clickers: those in the final stage of the cordyceps infection. The clickers’ skulls have split open to reveal huge plumes of fungus where their brains used to be. Their bodies don’t have functioning eyes anymore, so the fungus uses clicking and screeching noises as a form of sonar. The clickers used to be people, but now they’re nothing but vehicles for the cordyceps.

There are two components to really good body horror. The first is the grotesque transformation of a human body into something monstrous and unrecognizable. It’s fascinating, in a macabre way, to watch the clickers walk around with no brains left. Our health and well-being relies on the integrity of the human body, and seeing that integrity violated activates a very ancient fear.

Which leads us to the second aspect of good body horror: the fear of being invaded. After all, if a parasite is forcibly transforming bodies into monsters, it’s going to need lots and lots of bodies—including yours.

The Last of Us reminds me a lot of John Carpenter’s The Thing, in which an alien parasite takes over the bodies of a group of researchers in Antarctica. The Thing contains some truly wild body horror, but what makes it really unforgettable is the paranoia of trying to avoid infection. Remember the scene where the characters are testing blood samples to see who’s been taken over by the alien? That scene is just as creepy as the infamous spider head.

Similarly, The Last of Us wouldn’t be quite as chilling if we didn’t see Ibu Ratna’s horror at the tendrils reaching for her mouth—and another set of tendrils successfully invading Tess at the end of the episode. Cordyceps doesn’t just want to kill you. It wants to infiltrate and transform you, slowly and ruthlessly. And by witnessing that awful process, we get the thrill of the characters’ terror while our own bodies remain safe and intact.

90 Day Fiance The Other Way Star Gabriel Paboga Owns His Own Business: Take a Look!
Kelly Clarkson Stalker Arrested Against After 12 Restraining Order Violations
Hearts of Steel
Turns Out We Can Thank Teenagers For Why M3GAN Wasn’t ‘Way Gorier’
The Best Boxing Anime, Ranked by How Many Rounds You’d Survive in the Ring