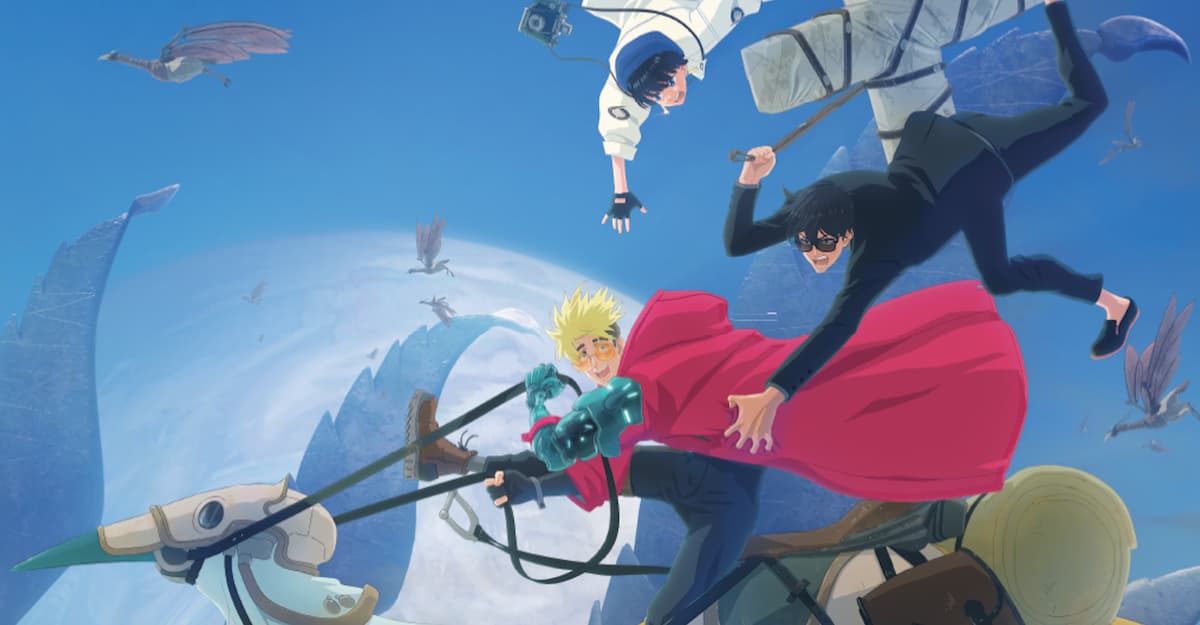 Trigun Stampede is now in full swing, with the dub of the show premiering two weeks behind the Japanese cast. This is not unusual—MAPPA’s blockbuster Chainsaw Man pulled the same stunt just one season ago. But, unfortunately, it does mean that fans waiting for the dub will have to block spoiler tags on Twitter and generally tread social media carefully. The wait and the treading will be worth it, though. There’s a lot for fans to be excited about in Trigun Stampede‘s dub cast, especially when it comes to the lead.

Trigun Stampede is a reboot of sorts, though it immediately branches off from the 1998 classic anime and the manga which preceded (and ended long after) it. Given the legendary status of the first series, both the dub and sub casts are packed with recognizable voices. Especially, again, when it comes to the main character in the dub.

If you’re a fan of the 1998 Trigun, you might be trying to figure out where you’ve heard the name “Johnny Yong Bosch” before. I’m delighted to tell you that, in 1998, Johnny Yong Bosch was in Trigun and played… Vash The Stampede. Vash was the role which launched Bosch’s career, and everything about Bosch’s return makes me happy.

Since his debut as Vash, Bosch went on to play such major roles as Lelouch Lamperlouge in Code Geass, Ichigo Kurosaki in Bleach, Sabo in One Piece, and Giyu Tomioka in Demon Slayer.

Speaking of Demon Slayer. Interestingly, the Japanese voice casting didn’t go with the same legacy casting idea that the dub did. But you’ve definitely heard Yoshitsugu Matsuoka before. He’s my boy Inosuke, after all! Matsuoka is everywhere: Kirito in Sword Art Online, Teru in Mob Psycho 100, Soma in Food Wars!… the list goes on.

Meryl got a pretty huge reimagining in Stampede. She says goodbye to Milly and the Bernadelli Insurance Agency, and hello to being a rookie reporter. For this new version of Meryl in the dub, we have Sarah Roach, who you’re mostly likely to recognize as Maki Oze from Fire Force. For the sub, we have Sakura Ando—a relatively new actress on the scene whose other recent role is as Legom in Studio Orange’s other big show, Beastars.

Replacing Milly as Meryl Stryfe’s traveling companion is Roberto De Niro, a brand new character debuting in Stampede. Roberto is voiced by Ben Bryant in the dub. Bryant also voices Kanjuro in One Piece, which really works for me as a parallel. Bryant also voices the hero Vlad King in My Hero Academia.

On the sub side, we have Kenji Matsuda, who’s most known for playing Zebra on Toriko.

One Piece fans might remember how the 4Kids adaptation of the anime—which is most famous for replacing the whale Laboon with an iceberg, cutting an entire plot line from the series—swapped out Sanji’s cigarette for a lollipop. It makes me smile that Stampede has done the same swap with Wolfwood here. But I’m just glad to see him, regardless of what’s in his mouth. (?!)

The dub casting will surely be announced in the coming weeks, as Wolfwood doesn’t appear until episode 4. Amazingly, for his sub casting, Wolfwood shares his VA with Rein Braun from Attack on Titan, Tokoyami from My Hero Academia, and (my favorite) Onigawara from Mob Psycho 100. I love that for you, Nicky. Now don’t make the same mistakes again, okay?

Just to give you a sense of exactly how different Trigun and Trigun Stampede are: we learn of Knives’ existence in episode one and properly meet him before we meet Wolfwood. So it’s safe to say that this will be a much bigger role, screen time-wise, than in the original Trigun. And this Millions Knives actually has… like… millions of knives! Wow.

His dub actor, Austin Tindle, is in so many things. To name a couple: Yu Ishigami in Kaguya-Sama, Marco in Attack on Titan, and—elsewhere in this current Winter 2023 anime season—Kyutaru on Buddy Daddies. This is Junya Ikeda’s biggest role to date, having previously done Joe Kido in Digimon Adventure tri.

Other than giving Johnny Yong Bosch his epic return as Vash, Child Knives in the dub is my other favorite voice casting. Think of the most popular series of last year. Do you kind of recognize that voice yet? It’s Megan Shipman, AKA Anya from Spy x Family! Super similar characters, obviously.

In a similar fun play of opposites, the character I recognize Yumiri Hanamori from previously is Mercedes in Fire Emblem: Three House. She’ll also be playing Sagiri in MAPPA’s upcoming Hell’s Paradise: Jigokuraku.

Child Vash’s sub voice actress, Tomoyo Kurosawa, also starred in Fire Emblem: Three Houses, as your personal inner goddess, Sothis. As for the dub, you might recognize Kirsten McGuire as Millim Nava in That Time I Got Reincarnated As A Slime.

For most of the first half of the 1998 Trigun, “Rem” was a mysterious name we heard Vash whisper longingly to himself any now and again. In Trigun Stampede, she’s one of the stars of the first scene. We’ll probably learn more about Rem at some point. Then again, I’m already learning not to rely on the original Trigun as a template for what Stampede might do.

Rem is voiced in the dub by Emily Fajardo, who also plays my beautiful, wonderful boy Bojji in Ranking of Kings. Continuing with precious things, Fajardo also played the titular Bananya in Bananya and the Curious Bunch.

In a fun Ranking of Kings show of solidarity, Maaya Sakamoto plays Miranjo in the sub. Very notably, she also plays Aerith of Final Fantasy VII fame in any appearances since 2017, as well as Mari in the Evangelion rebuild films.

Everyone’s favorite sadistic boy with the spiky shoulder is coming back! And he looks even more like an emo boy than ever before. A character also in the 1998 version for his voice—so silky!—it’s interesting to note that Koki Uchiyama also voices Inumaki in Jujutsu Kaisen. He’s also the Chimera Ant King Mereum in Hunter x Hunter.

We’re not sure exactly when Legato will pop up, and a dub actor has yet to be announced.

“Zazie The Beast” is a name that’s going to evoke some serious feels in viewers of the 1998 Trigun. But what Zazie will be up to this time remains to be seen. While the dub actress has yet to be announced, TARAKO most famous for playing Monokuma in Dangonronpa 3.

Whether “William Conrad” is supposed to be a nod to a Hollywood actor with the same kind of obvious nature as “Roberto De Niro,” I’m not sure. We also don’t know much about the character yet, other than he appears to be in cahoots with Knives.

The sub actor, Ryusei Nakao, is definitely most famous for playing Frieza in Dragon Ball. He’s also Caesar Clown in One Piece. My favorite random role of his, rough? Darkwing Duck in the Japanese dub of 2022’s Chip ‘n’ Dale Rescue Rangers.

What’s Next for Mugler?
HyunA and Dawn Are Reportedly Back Together Just 2 Months After Calling Off Engagement
Justin Roiland dropped from ‘Rick and Morty’ after assault charges come to light
T.J. Holmes and Amy Robach Are Leaving ABC Amidst Relationship Scandal
Adele’s Grammy Wins: How Many Awards She’s Won & What For