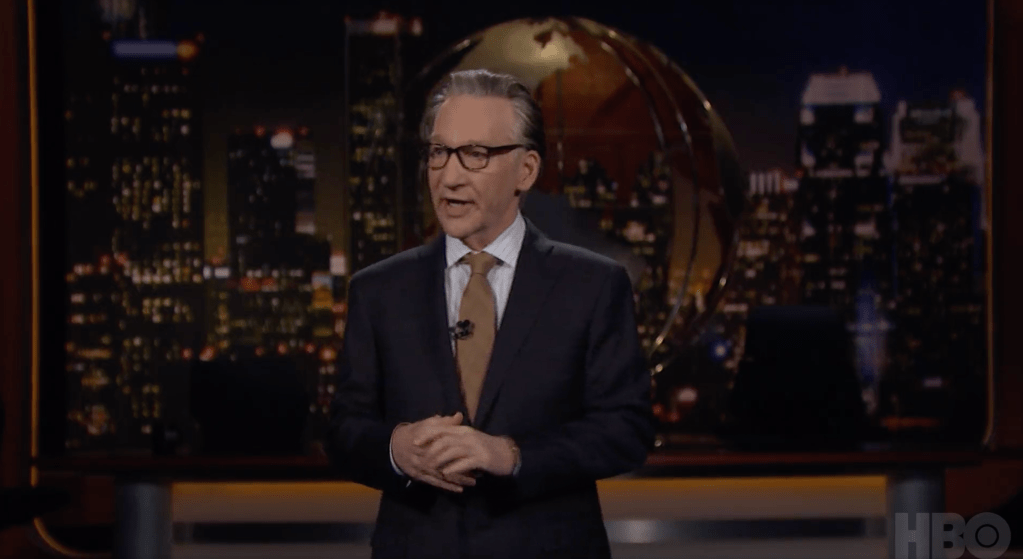 On the debut episode of Real Time’s 21st Season on Friday, Bill Maher had a lot of lost time to make up for and a lot of low-hanging fruit to grab after weeks of being away.

“We’ve got a new Republican House,” Maher began. “It took them 15 ballots. I think the last time it happened was 1823 or something.”

Then he put an exclamation point on it: “Fifteen ballots to elect Kevin McCarthy.”

By contrast, he noted, “Oscar nominations come out Tuesday. I know Washington likes to look down their nose at Hollywood and I would agree: Awards shows are pointless virtue signaling. But we don’t need 15 ballots to get it done, ok?

“Apparently it looks like they’re saying the big odds-on favorite to win [Best Picture] is this movie — I don’t know if you’ve seen it — Everything Everywhere All At Once,” Maher said before waiting a beat to deliver the punch line. “It is the story of how George Santos lies.”

Then he was off and running.

“I can’t keep up with this f*cking guy,” the Real Time host said of Santos. “He started a GoFundMe for a homeless veteran’s dog and then kept [the money]. Trump said, ‘He’s like the son I never had.’ “

Maher said that, despite all Santos’ lies, “They’re not getting rid of him. They need the vote.”

And it’s not just Santos, he said.

“This new Congress — Majorie Taylor Greene, Jim Jordan, Lauren Boebert — what can I say? The zombies are in the mall.

“Majorie Taylor Greene has got a seat on the Homeland Security Committee. Two years ago, she couldn’t get a seat at the adult table at Thanksgiving.”

The Real Time host compared the situation to a reality TV show.

“I couldn’t make this up,” he said of Greene. “She and Lauren Boebert — you know, the other one, the crazy gun nut from Colorado — they had a fight in the ladies room. Yes, The Real Housewives of Congress.

“With all due respect to my friend Jeff Foxworthy, when you’re fighting in the ladies room, you might be a red neck.”

Latto Claps Back At Style Troll By Listing Her Underwear On Ebay & Gets $100K Bid
The Swifts
Annie Wersching, 24 and Timeless Actress, Dies of Cancer
ABC Not Looking for T.J. Holmes and Amy Robach Replacements
Kourtney Kardashian’s Naked Dress Is Her Most Unconventional Look Yet