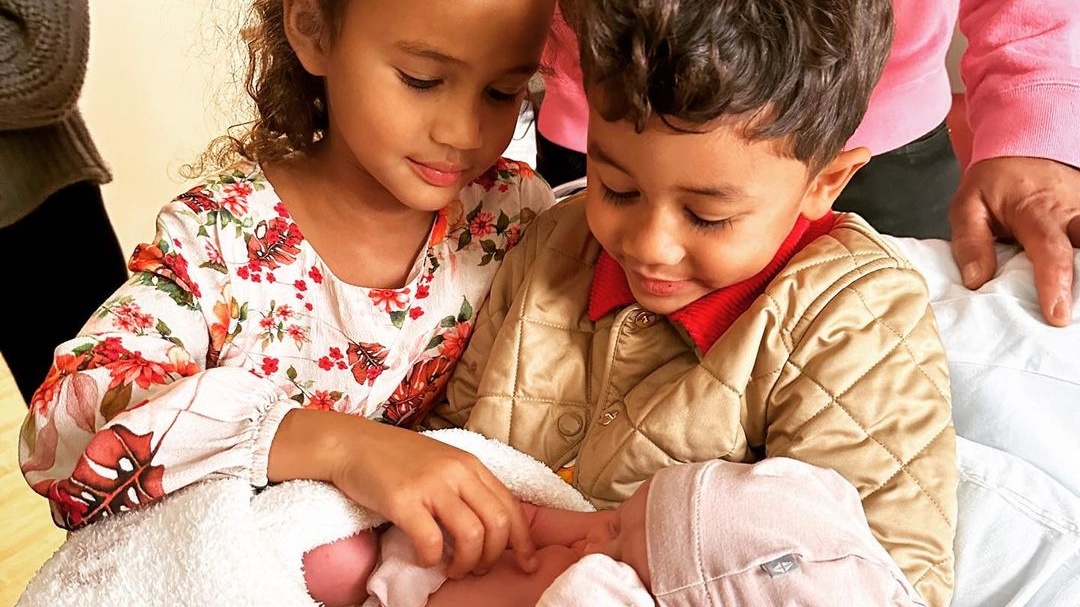 Now, the celebrity couple have shared an adorable photo of their newborn cuddling with their other two children.

Luna and Miles’ baby sibling has a name.

And, in her usual fashion, Chrissy is getting extremely real about what it has been like recovering from her C-section.

On Thursday, January 19, Chrissy Teigen took to Instagram to offer this adorable photo of her three children.

“The house is bustling,” Chrissy described, “and our family could not be happier.”

Referring to her husband, John Legend, Chrissy wrote that “Daddy sheds nightly tears of joy seeing Luna and Miles so full of love.”

But there are, it turns out, some downsides to Baby #3 just as there were for her previous pregnancies.

“And,” Chrissy shared, “I am learning you still need diapers with a c section!?”

“We are in bliss,” Chrissy expressed.

“Thank you for all the love and well wishes,” she concluded, assuring her fans and followers that “we feel it all! X”

We are certain that Chrissy herself is feeling a great deal. Recovering from childbirth is no joke. And no, a C-section does not make it “easier.”

Chrissy and John welcomed baby Esti on Friday the 13. An auspicious date of birth!

But don’t worry — even if Esti grows up to dread that date (or horror film franchise), her birthday will only occasionally fall on a Friday. That’s how calendars work.

For now, she’s just working on the basics. She’s growing accustomed to living in the actual world and recognizing her parents’ faces and voices.

Late last summer, Chrissy revealed to the world that she and her husband were expecting a rainbow baby.

“The last few years have been a blur of emotions to say the least,” she began.

“But,” Chrissy continued, “joy has filled our home and hearts again.”

“1 billion shots later (in the leg lately, as u can see!) we have another on the way,” Chrissy wrote.

She was of course referring to the IVF journey that she had undertaken in order to conceive despite fertility struggles.

“But then,” she wrote, “I breathe a sigh of relief to hear a heartbeat and decide I’m just too nervous still.”

“I don’t think I’ll ever walk out of an appointment with more excitement than nerves,” she admitted.

“But so far, everything is perfect. And beautiful and I’m feeling hopeful and amazing,” Chrissy declared at the time. “OK phew, it’s been very hard keeping this in for so long!”

Chrissy will likely be busy for some time. She is a mother of three. And given her scandal a few years ago, she is not as popular as she once was.

However, Kyle Richards recently suggested that Chrissy would be “perfect” for The Real Housewives of Beverly Hills following Lisa Rinna’s departure.

We don’t know how Bravo or Chrissy will feel about that — but perhaps we will one day find out.