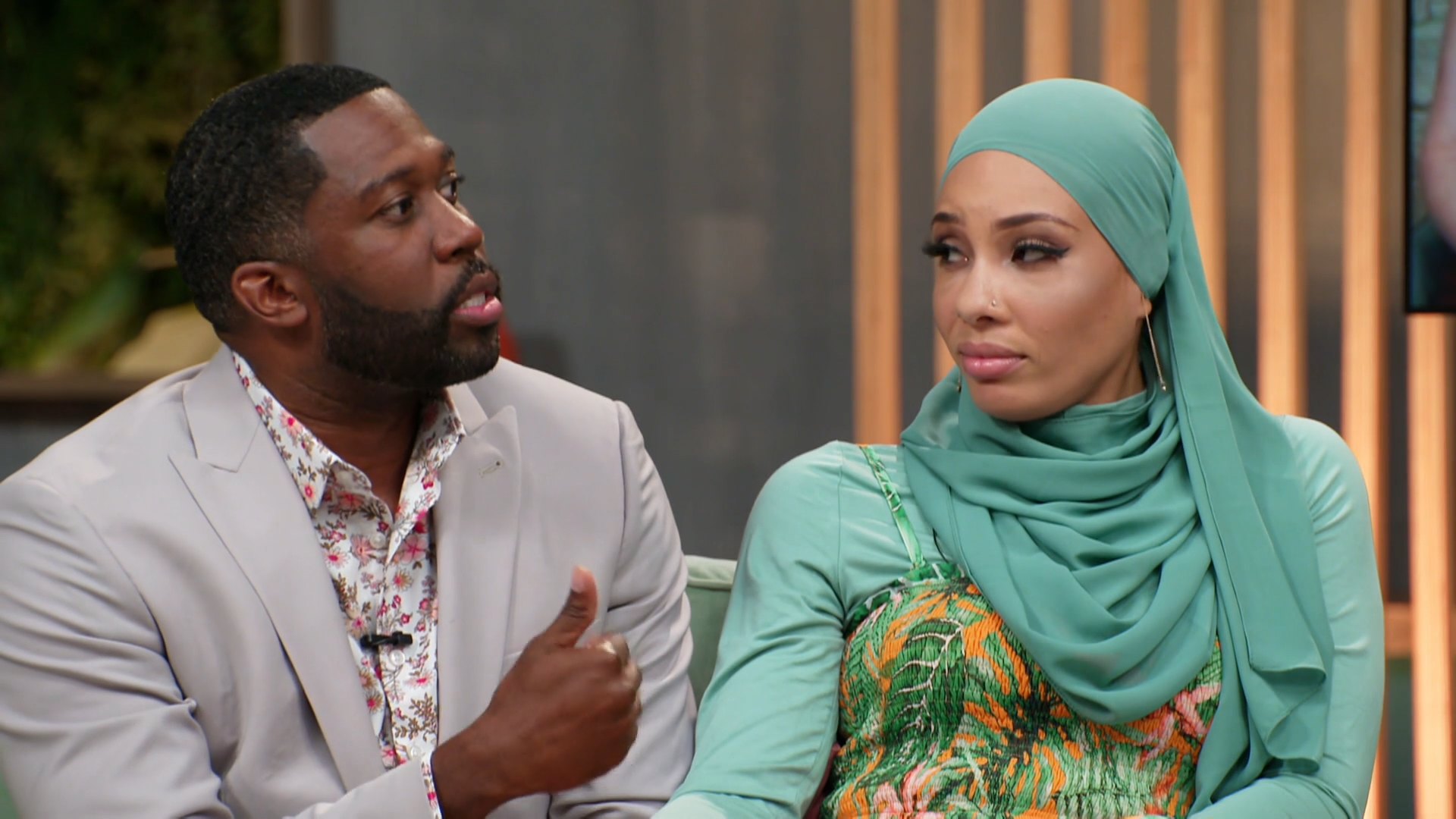 During the 90 Day Fiance: Happily Ever After? Season 7 Tell All special Part 3, one couple was in a totally different place.

We don’t mean Ed and Liz after the breakup. After their 11th split, that’s nothing new.

No, we’re talking about Bilal Hazziez and Shaeeda Sween.

Suddenly, they’ve reversed stances on their life plan as a couple. Plus they have a major trust issue. Oh, and then there’s a proposal?

The night before the second day of filming this four-part Tell All special, Shaeeda sat down with Yara Zaya. They covered multiple topics.

Among them was what the plan was for Day 2. They both knew that Shaeeda and Bilal would take their turn in the spotlight.

Yara was already familiar with some of their issues, including Bilal being secretive about finances. And Shaeeda told her that she planned to be upfront about their disagreements in that area.

First of all … remember that 9-month ultimatum? They establish that they have not yet reached the deadline.

However, the couple admit that they have only tried a few times. Barring special luck (be it good or bad, depending upon the couple’s intentions), that is not usually enough to conceive.

The cast expressed surprise at Bilal’s openness to having a baby. He had seemed hesitant, at best, before.

Production played a never-before-seen clip of their awkward trip to an herbalist to look at possible fertility aids.

Somehow, the merchant steered the conversation to Bilal’s virility. We get it — it’s the seller’s job to suggest other products, especially on camera.

To the chagrin of anyone watching this with their parents, this led to the man asking Bilal (and Shaun asking the cast) if they’ve “heard of edging.” Unbelievably, only Andrei admitted to knowing about this common sexual practice. Or … are we just too chronically online?

Then came the jaw-dropping revelation: Bilal came around on having a child with Shaeeda. But she is, as he predicted earlier, focused upon settling into her new life in America.

However, Shaeeda also explained that she feels concerned. Why? Because Bilal does not seem to trust her. He refuses to tell her anything about their finances or to open a shared account.

How can she have a baby with someone who doesn’t trust her? Yara, Jovi, Elizabeth, and Andrei all chime in about their own shared marital accounts and financial transparency. What Bilal is doing is not normal.

Bilal claimed that he wants to teach her financial literacy. He thinks that she blows through money too quickly. But he’s clearly not the right person to assess this.

Most grown adults are too embarrassed to smuggle snacks into a movie theater. You buy them there, or you go without. Apparently, Bilal refuses to even buy popcorn when they go to the movies. He is a successful adult, but still pinches pennies that hard. It’s cringe.

One can understand that Bilal grew up in a very different economic bracket and may feel hardwired to reject certain expenses. But Shaeeda should not have to pay the price for his childhood.

With Bilal’s insistence that he just wants to educate his wife, Yara chimes in with a question: why does he think that he needs to “teach” this grown woman?

Bilal notes that you’re never too old to learn something. Hey, that’s true! But he feels like she doesn’t appreciate his efforts to teach her.

Maybe because his lectures feel more like mansplaining with a patronizing expectation that she’ll agree with his way of doing things. Just a thought!

Bilal’s friend Chris, who has known him since their teens, joins the Tell All. He thinks that Bilal’s lectures are helpful.

But he quickly begins throwing up red flags, starting by asking “what man doesn’t want to lead his family?” If you’re getting redpill vibes (or something similar), they keep on coming.

He spirals, insisting that he is “defending men.” And he absolutely clashes with Shaeeda’s friend, who is controversial in her own right.

Eutris calls out Bilal’s micromanagement. And Yara chimes in with the suggestion that, hey, Bilal and Shaeeda could open a joint account and only close it if Shaeeda somehow can’t handle it. Yara’s sure that she’ll do fine.

Then, Eutris notes that Bilal needs to communicate better with his wife, as an equal rather than as a student or a child. Shaeeda could be more receptive if he shows respect.

Importantly, multiple people call out Eutris’ “joke” in which she, during the season, discussed Shaeeda sabotaging her own birth control to get what she wants. That’s not funny and would be a despicable thing to do in real life.

Even though Bilal feels like he cannot trust Shaeeda to decide whether she wants to buy popcorn, he does now want to have a baby with her.

His proposal to her, kneeling and presenting her with an “If you think I’m cute, you should see my mommy” onesie, is very precious.

The Tell All stage filled with applause. Yara even teared up and cried at such a sweet moment.

Jake Gyllenhaal Gets to Work on Upcoming Series ‘Presumed Innocent’ in L.A.
You Can Now Relive BTS’s “Yet to Come” in Busan Concert Set List in Theaters
M. Night Shyamalan’s ‘Knock At The Cabin’ To Knock ‘Avatar 2’ Out Of No. 1 Spot – Box Office Preview
‘Avatar 2’ Rises To No. 5 On All-Time Global Chart; Will It Overtake ‘Titanic’ Next?
Korean Content Streamer KOCOWA Adding Films And A ‘+’ To Its Previous TV Fare