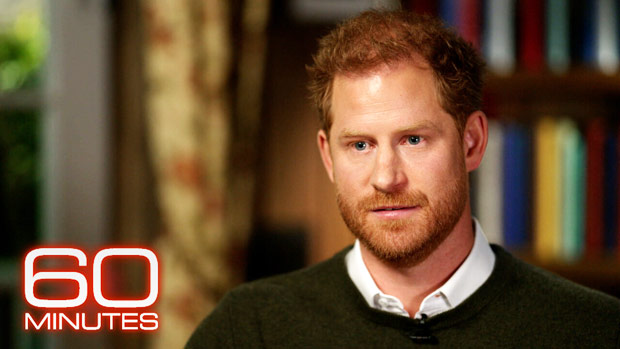 Prince Harry continued to tell all during his 60 Minutes interview on Sunday, Jan. 8. The Duke of Sussex, 38, who is promoting his upcoming bombshell memoir Spare, sat down with Anderson Cooper to discuss the on-going rift in the Royal Family that ultimately caused him and his wife Meghan Markle to step down from their royal duties and move to North America in 2020. During the intense one-on-one, Harry also admitted he wasn’t able to cry over the 1997 death of his mom, Princess Diana, even well into his 20s. “I was constantly trying to find a way to cry,” he admitted.

“Even sitting on my sofa, and going over as many memories I could muster up about my mom, and watching videos online,” Harry added, saying nothing worked, He eventually sought out therapy to help with his anguish and eventually tried psychedelics. “I would never recommend doing this to people, but doing it with the right people, if you are suffering from a huge amount of loss and grief or trauma then these things have a way of working as a medicine.” He said the medicine helped him realize that he didn’t have to cry and that his mom “just wanted me to be happy.”

When pressed on why he decided to speak out publicly against Buckingham Palace and what he claims is their misinformation campaign against him and Meghan, Harry insisted he had initially tried to keep his concerns behind closed doors. “Every single time I’ve tried to [resolve issues] privately, there have been briefings and leakings and planting of stories against me and my wife,” he told Anderson, adding, “You know, the family motto is never complain, never explain.”

Harry went on to claim that Buckingham Palace “spoon-feeds” information to a correspondent, who then writes up a story for the press using that information and adding that the correspondent had asked for a comment from Buckingham Palace. “But the whole story is Buckingham Palace commenting,” Harry explained. “So when we’re being told for the last six years, ‘We can’t put a statement out to protect you.’ But you do it for other members of the family. It becomes— there becomes a point when silence is betrayal.”

Shiloh Jolie-Pitt, 16, Rocks Buzz Cut Makeover As She Shops With Sister Zahara, 18: Before & After Photos

He also spoke about the root of what he claims was the mistreatment of his wife by the British press, and ultimately, why they decided to start a new life: Meghan’s race. “What Meghan had to go through was similar, in some part, to what Kate [Middleton] and what [Queen] Camilla went through — very different circumstances,” he said. “But then you add in the race element, which was what the British press jumped on straight away, I went into this incredibly naive. I had no idea the British press was so bigoted. Hell, I was probably bigoted before the relationship with Meghan.”

Anderson followed up and asked if Harry thought of himself as bigoted. “I don’t know,” Harry replied. “Put it this way, I didn’t see what I now see.” Harry also said the issues with Meghan made Buckingham Palace claim Harry became a different person after he met her. “He’s changed, she must be a witch,” Harry quipped.

In a preview clip for his 90-minute ITV special, Prince Harry: The Interview, which airs the same day as the 60 Minutes interview, Harry also touched upon a possible reconciliation with his family even after the drama was exacerbated when the couple spoke out on their alleged mistreatment by the Royal institution during their 2021 bombshell Oprah interview. “I want reconciliation,” Harry told Tom Bradby. “But, first, there needs to be some accountability. The truth, supposedly, at the moment, has been there’s only one side of the story, right? But, there’s two sides to every story.”

“I would like to get my father back,” he added. “I would like to have my brother back.”  Harry also said that he’s hoping that he can sit down and talk to members of the family before his dad’s coronation ceremony in May.

Harry also sat down with Good Morning America in an interview with Michael Strahan that airs on Monday, Jan. 9. In a teaser, Harry touched upon his late mother Princess Diana, and how she would feel about the feud between himself and his brother Prince William. “I think she would be sad,” Harry said. “I think she’d be looking at it long term to know that there are certain things that we need to go through to be able to heal the relationship.”

Ahead of the memoir’s release, excerpts were reported on after a major leak occurred, including the accidental early sale of the book in Spain, per ABCNews. One claimed that King Charles banned Meghan from visiting Queen Elizabeth as she lay dying in her home at Balmoral Castle in Scotland. Harry said he told his father in response, “Don’t ever speak about my wife that way,” according to the outlet.

Another excerpt found Harry breaking his silence on his uncle, Prince Andrew’s, sexual abuse allegations that involved ties with Jeffrey Epstein. Harry slammed Andrew’s “embarrassing scandal” and the fact that Andrew’s security was not removed despite Harry and Meghan Markle losing theirs after stepping down from royal duties.

One of the more explosive excerpts detailed a fight between Harry and his brother William, per The Guardian. The Duke of Sussex described an alleged meeting with his brother in 2019 that led to an attack. Harry claimed William had called Meghan “rude” and “abrasive.” Harry said he tried to leave before it escalated. “He grabbed me by the collar, ripping my necklace, and he knocked me to the floor. I landed on the dog’s bowl, which cracked under my back, the pieces cutting into me. I lay there for a moment, dazed, then got to my feet and told him to get out.”

In a turnabout, however, Harry also mentions the moment he and William were a united front for a brief moment when they confronted their father about stories of William and Kate’s three children allegedly being fed to the press by Charles’ team. According to Harry, the William was “seething” after he claimed Charles’ team member “devised and launched a new campaign of getting good press” for King Charles III and Queen Camilla, which came “at the expense of bad press” for William’s family. Harry said their father quickly shut both of them down, and, sadly, claimed William then turned his anger towards his little brother.

HollywoodLife will keep you posted on the upcoming interviews with Prince Harry — including Tuesday’s appearance on The Late Show with Stephen Colbert — and the all the explosive details that will emerge when Spare is finally released on January 10!

Barrett Strong, Motown Singer and Temptations Songwriter, Dies at 81
Not Hungry In The Morning? It Could Be A Sign Of Stress
Annie Wersching, 24 and Timeless Actress, Dies of Cancer
Eiza Gonzalez Seen Out For Dinner With Kendall Jenner’s Ex-BF Ben Simmons In NYC: Photos
Sen. Ted Cruz Refuses to Apologize to Paul Pelosi For Attack Conspiracies