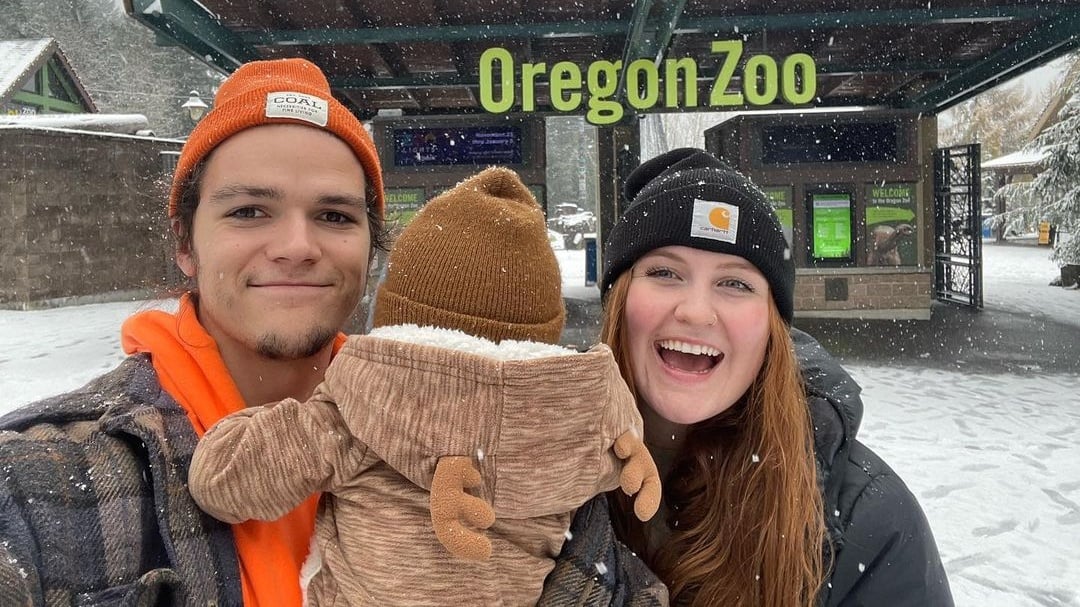 Just because Jacob Roloff escaped the soul-sucking world of reality television doesn’t mean that he’s no longer a public figure. His parents made that choice for him long ago.

That means that the eyes of Little People, Big World fans are always upon him.

Some of those eyes belong to parent-shaming trolls with malice in their hearts and worms between their ears.

Fortunately, Jacob knows how to put them in their place. And he doesn’t have to say much at all.

He, his wife Isabel, and their one-year-old Mateo, enjoyed an enviously snowy day and visited the zoo.

“Perfect snowy day at the zoo,” he then described.

“With,” Jacob continued, “almost no one else there.”

Sounds like a dream! Especially for those of us still experiencing uncomfortably warm weather.

Jacob also provided an update on how their excited baby is developing.

“And getting more and more confident walking every day,” he added. “Sweet sweet sweet boy.”

All of that is very sweet, right?

Unless, of course, you are a malicious person who harbors several extremely bad opinions and zero filters to stop you from sharing them.

One commenter raged with an absurd foaming-at-the-mouth take about Jacob and Isabel teaching sign language to Mateo.

“So ridiculous to teach sign when they aren’t deaf,” this absurd troll declared.

“You going to give him insulin too if he doesn’t have diabetes?” the twisted dad-shamer mocked. “So stupid. Be grateful he can hear.”

Some comments are worth blocking or simply ignoring. Others merit a direct reply.

In this case, Jacob shared a screenshot of the unhinged and deeply wrong attempt at trolling.

Jacob’s sole commentary got straight to the point: “This is the most entertaining sort of brain rot.”

So, first and foremost, we just have to point out the most obvious flaw in this troll’s “thinking.” If you can even call it that.

Sign language doesn’t work if only deaf people know it. Otherwise their communication is pretty limited.

It’s sort of like all other languages in that respect. “Language” is right there in the name. Just a no-brainer.

While it is an intrinsic good for more people to know sign language, that is not the only reason for an infant to learn.

Learning sign language can help with motor skills, language skills, and communication at an early age.

Speech therapists who are helping children with issues like speech delays or selective mutism often teach sign language. It helps to stimulate the same parts of the brain as other languages. Because it is a language.

In fact, there are advocates who suggest that teaching sign language in elementary school replace the useless antiquated nonsense of cursive writing.

Unless an ancient document springs to life, you will never desperately need to write cursive to communicate with someone. Sign language, on the other hand, can be a vital tool.

For now, we don’t know Jacob and Isabel’s reasons for teaching sign language to Mateo. We don’t have to. It doesn’t matter. And it’s not our business.

HyunA and Dawn Are Reportedly Back Together Just 2 Months After Calling Off Engagement
Drew Barrymore Pokes Fun at Leonardo DiCaprio’s Bad Boy Reputation
Vanilla French Nails are trending and they’re a sweet treat for Vanilla Girls everywhere
David Harbour Haunts Anthony Mackie and Jennifer Coolidge in “We Have a Ghost” Trailer
‘Avatar: The Way Of Water’ Moves Up To No. 4 Biggest Movie Ever Global, Leaving ‘Force Awakens’ In Its Wake