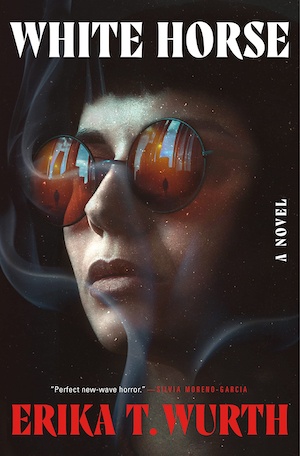 The White Horse is a run-down Indian bar in Denver. It’s where Kari James, an urban Indian woman of Apache and Chikasaw heritage, goes to drink beer and whiskey, unwind after working her waitressing and bartending jobs, and occasionally pick up men. Kari is in her mid-30s and thinking of buying the bar and fixing it up. Kari is at that stage of life where she’s just beginning to think it’s time to settle down and make plans, perhaps be more responsible. After all, she’s got her dad, disabled from a car crash, to look after.

Kari’s best friend is her white cousin, Debby, but her constant pestering to get in a relationship is a source of disagreement between them. Kari made a decision 20 or so years ago, along with her childhood friend Jaime, that she would enjoy life as she pleased, without any boyfriend to hold her back. Together, the two girls had a wild adolescence, partying, getting drunk and high, and enjoying casual sex. Jamie’s death haunts her all these years later, and her memories of that time are bittersweet. The other source of friction between the two women is Jack, Debby’s drunken and jealous husband. From Kari’s perspective, Jack is controlling and abusive. She can’t understand why Debby can’t see it.

One evening at the White Horse, Debby gives Kari an Indian bracelet she found clearing out her uncle’s attic. It’s made of hammered copper, decorated with Native images and looks old. She thinks it might have belonged to Kari’s mum, who ran out on Kari and her dad two days after her birth, never to be seen again. Reluctantly, Kari accepts the bracelet but is determined to forget about it.

Resentment wins out over a need to know about the mother she can’t remember, but from that point on Kari has visions – first of her dead friend, then of a screaming Indian woman, and then of a monster ripped from the pages of Indian mythology. Kari is sceptical at first, but gradually accepts that the woman is her mother, and that for her spirit to be at rest, she will have to solve the mystery of her disappearance.

Her mother had previously been something of a taboo subject for Kari, but when she begins to ask her close family about her, she learns about grandparents she never knew she had, and of her mother’s political activity protesting for Indian rights. Could her mother have been a victim of law enforcement, the way so many civil rights activists were in the past?

White Horse is a slow burn. It’s a thriller which mixes crime and horror elements but these develop gradually alongside Kari’s haphazard investigation of her mother’s disappearance. The author takes her time developing the genre aspects of the story, concentrating initially on developing Kari and Debby’s characters and the dynamic of their relationship. Her approach pays dividends, resulting in a thematically rich, poignant, even intimate, novel about (amongst other things) grief and regret, but which is ultimately life affirming.

White Horse is an incredibly assured novel, and I will be keeping a keen eye out for whatever Erika T Wurth decides to write next.

We’ve featured some great novels by First Nations writers over the last couple of years including Winter Counts by David Heska Wanbli Weiden and The Only Good Indians by Stephen Graham Jones.