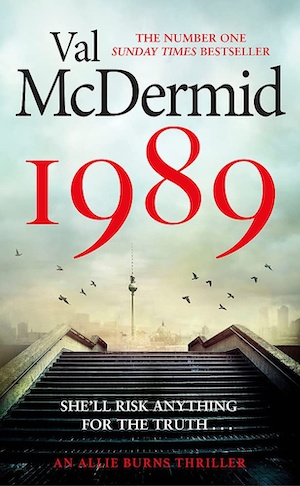 The 1980s are having something of a renaissance right now thanks to TV series like The Newsreader and Stranger Things. Just ask Kate Bush, whose 1986 hit Running Up That Hill took on a new life after featuring in the latter show on Netflix.

Val McDermid is an author who likes to have her finger on the pulse – for evidence, you only have to look at her annual New Blood panels at the Harrogate Crime Writing Festival – so it is no surprise that she’s right in the flow with the release of 1989, second in her series about Scottish journalist Allie Burns.

Allie has moved on in the 10 fictional years since we were last acquainted. She now runs the northern desk of a national newspaper and is based in Manchester. She’s also living happily with Rona, who we met in 1979, and the pair are openly gay – something still frowned upon in the country where they met. But Scotland is still pulling Allie back and as the book opens she is reporting on the aftershocks of the Lockerbie Disaster — the bombing of Pan Am flight 103 which happened late in December 1988.

It’s the first of several major news events that pepper the narrative of 1989 and anchor the reader firmly in the era. McDermid did this brilliantly in 1979 and she works her literary magic here too. It’s an immersive and slightly disconcerting experience to look away from the page and realise you’re actually living in another decade, another century.

There’s a wind of change blowing across Europe and in the newspaper industry too. Media mogul Ace Lockhart’s takeover of the press company that employs Allie has forced her away from her beloved investigative reporting and into a job that has more administration than she is happy with. Meanwhile, rumblings in East Germany are about to put a plum story in her lap – but first she has battles to fight on home soil.

The AIDS epidemic is gathering pace and the authorities are falling far short of handling it with humanity and common sense. Allie uncovers an horrific story, that AIDS sufferers in Scotland are so marginalised that they’re having to come south of the border to get any kind of treatment at all. Will her sensationalist new boss allow her to tell it, her way? As Lockhart and Burns butt heads, there can only be one winner.

Lockhart is a Robert Maxwell-type, with a daughter who is almost as ambitious as her father. Both Ace and Genny are about to take centre stage in a story that crosses borders and digs deep into the political intrigues of the era. Bull headed and principled, Allie Burns is not really someone they want on their radar – but they’re definitely going to need her before this tale is over. Unrest is roiling in Germany, and in the months before the fall of the Berlin Wall, Allie’s Scottish AIDS story leads her to the East, where sufferers are being used as guinea pigs for a drug that has already proved to be unreliable at best. What happens next puts her in Genny’s debt, and soon payment will be due – in spades.

Themes of love, family ties, honour, prejudice, greed and avarice run through this novel like blood through a vein, providing a pulse that drives the narrative along. The scent of newsprint and the clatter of typewriters served as a sensory backdrop to 1979. Both are missing here because time has moved on and so has the central character. Sadly, this dulls the authenticity of parts of 1989, but McDermid’s take on the Hillsborough disaster more than makes up for it. Allie arrives as the bodies are being brought from the stadium and I was in tears as I read the fictional account of a real-life tragedy. It is sensitively handled and vividly portrayed and I congratulate Val McDermid for striking a perfect balance.

There’s less of the writer and more of the adventurer about Allie Burns circa 1989 and for me that was a bit of a downer. Like her, I miss the hustle and bustle of the busy newsroom and by the end of the book it looks as if she may be moving even further away from it.

What’s in store for Burns in 1999? We’ll have to wait to find out, but in the meantime at the back of 1989 McDermid provides us with an excellent top 40 of 80s bangers to bop along to!

See our pick of 10 of the best crime books featuring journalists.