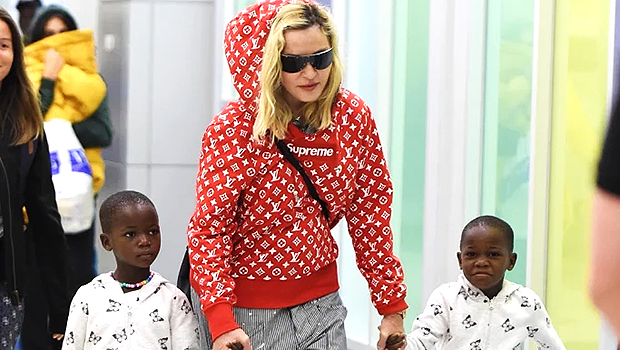 Happy birthday Madonna! As the singer celebrated her 64th birthday, she posed for a photo in matching outfits alongside her twin daughters Stella and Estere, both 9, on Tuesday, August 16. Madonna posted a gorgeous photo set, which included her showing off a series of poses, and other photos with friends, where she included a shot of her and the twins. “Sicilian Queens,” she captioned the photos.

The dress that Madonna and the twins rocked looked light and perfect for summer nights. It had a blue and white floral design. The twins wore matching bracelets on their arms, while the singer sported a little bit more jewelry. Their mom also wore a matching blue sun hat for the photo. Both Stella and Estere stood in front of their mama, as Madonna wrapped her arms around both of the girls.

It seemed like the “Like A Virgin” singer had an amazing time with her loved ones as she celebrated her latest birthday. Aside from the many stunning photos alongside family and friends, Madonna had also shared a video of herself kissing two women in the back of a car as she celebrated her latest trip around the sun. She had also taken to her Instagram Stories to share tons of photos, documenting her “Birthday fun,” including another shot of one of the twins posing on a couch, and another sitting on a chair for a picture. It looked like a fab time was had by all.

Stella and Estere are the youngest of Madonna’s six kids. While the “Material Girl” is clearly a loving mom, she rarely posts photos of her children. She did give another glimpse at her children when she shared a photo celebrating her son Rocco Ritchie’s birthday earlier in August.

While Madonna clearly had a blast on her birthday, she’s also had an incredibly busy year. Recently, she’s been hard at work on music, including her recent collaboration with Beyoncé on a remix of the singer’s new hit “Break My Soul.” An insider revealed to HollywoodLife exclusively that Madonna has been “pushing for” a collaboration with Britney Spears, after it was announced that the “Toxic” singer would be joining Elton John for a duet.

Madonna’s Boyfriend: Her Most Recent Ex Ahlamalik Williams & More From Her Romantic History