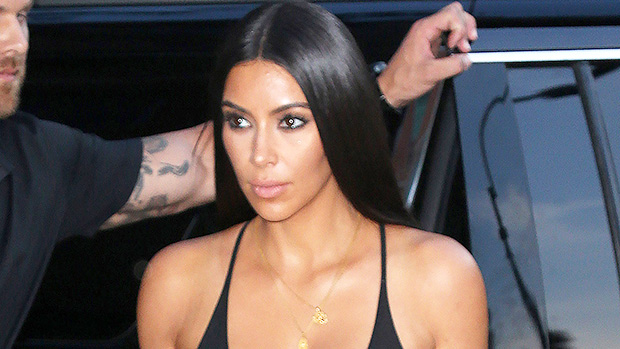 Ahoy, Kim Kardashian! Roughly two weeks after Kim, 41, and Pete Davidson called it quits, the SKIMS mogul and The Kardashians star hit up the lakeside retreat at Coeur d’Alene, Idaho, with her family on Sunday (Aug. 14). In photos seen here, Kim decided to enjoy the late summer sun while out on a boat. For this maritime adventure, she donned a black bodysuit with a zippered front – one that she unzipped down to her chest, giving her a plunging neckline. Kim accessorized this look with a pair of oversized sunglasses while putting her blonde hair up. As she relaxed in the sun, Kim checked her phone, pulling down her sunglasses for a better look at the screen.

Kim’s bodysuit boat trip came the same day she decided to work up a sweat by posting a few thirst traps. “I do my own heavy lifting,” Kim captioned the Instagram gallery of her posing in a tan-colored bikini, a white shirt (pulled back over her head to show off said bikini), and a pair of knee-high, camo-colored boots. Despite its grainy resolution, this random photoshoot earned raved reviews from Kim’s fans (“Holy sh-t, Kimberly,” wrote Khloe Kardashian).

The gym shoot and boat trip coincided with little sister Kylie Jenner’s 25th birthday, which featured plenty of tequila and fun – two ingredients essential for any post-breakup period. Kim is newly single, having broken up with Pete Davidson, 28, after nine months of dating. The two ended their relationship around Aug. 5, shocking fans who thought Kim had found a happily ever after following her uncoupling from Kayne “Ye” West. Despite this strong connection, the couple “had some very deep talks that led them to them ultimately deciding to break up,” a source told HollywoodLife EXCLUSIVELY.

“There were a lot of things stacked against them. There’s still a huge attraction between them and a strong connection, so it’s not like it ended badly, but at this point, Kim seems clear that it’s over,” the insider shared, adding that their 12-year age difference was a bit of a factor in the breakup. Kanye’s continued attacks on their relationship weren’t the reason they broke up, but the source said that his “antics certainly didn’t help them.”

“Pete is a great guy, and they had a magical time, but he was also on the heels of her messy divorce with Kanye, which is still not over,” the source told HollywoodLife. Kim still has to wrap up her split from Ye “before moving forward with a man who wants her to be the center of his world.”

Kim Kardashian’s Divorces: Everything We Know About Her 3 Marriages

Longlists Announced for 2022 National Book Awards
Andor Review: Rogue One Prequel Differs From Every Star Wars Series Before It, in the Best Ways
The 10 Most Iconic ‘Star Wars’ Quotes
Maci Bookout: I’m SO GLAD I Got Ryan Edwards Fired From MTV!
Kate Winslet Will Return To Set Of ‘Lee’ This Week After Fall On Set – Update