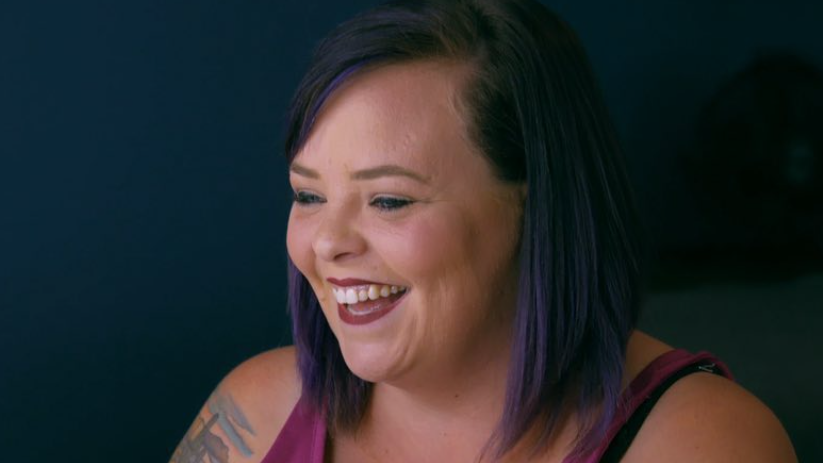 OK, so generally if you are a person who regularly appears on television, you make money for it.

Most of the time, you make a great deal of money.

The stars of MTV’s Teen Mom OG and Teen Mom 2 have never been incredibly open about their salaries, but we’ve certainly gotten some solid clues over the years.

For example, we know that the original cast members, the ones who have been around since the very first season, make the most.

We also know that the teen dads who are still on the show earn the same as the moms.

The last solid figure we heard came from Amber Portwood’s custody case — it was revealed in documents there that she makes $600,000 a year, just for doing the show.

So it stands to reason that that’s how much Catelynn Lowell makes, and since Tyler Baltierra has always been firmly in the picture, he should make that much, too.

Which means that there’s a very strong likelihood that Teen Mom’s longest-lasting couple brings in over a million dollars a year together.

And that’s why this new thing that Catelynn did is rubbing so many people the wrong way.

Cate and Tyler have three little girls at home: Nova, Vaeda, and Rya.

Nova is getting older — she’s seven now, if you can believe it — and she’s starting to get into extracurricular activities.

But Nova could use your help — yes, your help specifically — again, according to Cate’s post.

In a message she shared to her 4.2 million followers, Catelynn wrote “So Nova is looking for sponsors you can literally pick ANY number on this page and pay the number! So if you pick number 20 then you would donate $20!”

She shared an image of the page she was talking about, of course, showing you could pick any number from one to 30.

“The donations would help with uniforms, practice and competitions!” she explained. “Anything helps thank you so much!”

“Forgot to say for donations your name gets put into a drawing for prizes!” she added, just to throw a little extra incentive in there.

She finished the post by saying that she “can’t believe I’m gonna be a cheerleader mom,” and told anyone to send her a private message if they want to donate.

Now, for a lot of people, this kind of thing is familiar, this little sheet where you can pledge donations for children’s activities.

Well, for a lot of people, that was just too much to bear.

Cate turned the comments off on the original post, interestingly enough, but she did make another post thanking anyone who had donated so far, and comments were open there.

And boy, did her followers let her have it.

“This is utterly shameful,” one of her followers wrote. “We are literally in a recession and some people are struggling to afford food and gas and you ask us to donate to your daughter cheer fund?”

“You guys make huge salaries. Most of your fans make minimum wage. This is shameful and tacky. Clearly your fans are just dollar signs to you.”

One person suggested “If she wants her daughter to get sponsors maybe do a lemonade stand? Not ask all of her mtv fans lol,” which makes sense.

“Most of us can barely afford gas and groceries for our own kids right now, but I’m so glad you got the money you asked for to help support YOUR kid while you have hundreds of thousands, perhaps millions, sitting stacked in the bank,” another follower scoffed.

There were a lot of people who did defend Catelynn with this, arguing that fundraising is part of the experience and Nova shouldn’t get to miss out because her parents are famous and wealthy.

But the issue with that is that Nova isn’t doing any of the fundraising, so like … what kind of experience is she getting from this?

She seems like a precious little girl and of course we hope she has the most fun cheerleading her little heart out.

But we seriously cannot fathom how Catelynn thought this would be a good look.