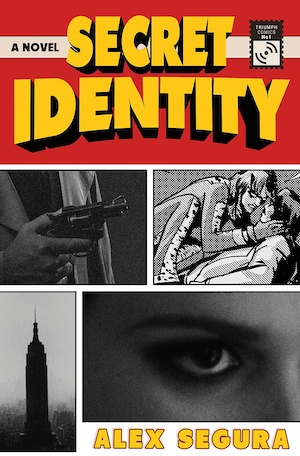 The comic book industry and crime fiction are intertwined. For example, the pulp comics of the 1930s such as Black Mask and The Shadow led to the superhero comics we know today as well as the pulp fiction novels of the 1950s and 60s. New York author Alex Segura knows this history well and has worked in both worlds. He has written comic books, and is known in crime fiction for his Pete Fernandez novels. In Secret Identity, the comic book industry is the sandbox in which he shapes a gritty hardboiled noir novel laced with contemporary themes.

We step back in time to 1975. New York, the heart of the comics world, is a dangerous city with muggings, break-ins and and violence down every alleyway. It’s also an inspiring place, bustling with life and creative energy. Up-and-coming musicians Patti Smith, The Ramones, Television and Talking Heads are playing CBGB. The Vietnam War is still fizzling out and six years earlier members of the gay community clashed with police at the Stonewall Inn. It’s a precarious and turbulent time and Segura creates an authentic sense of the place and period.

Carmen Valdez is from Miami. At 28, she has arrived in New York to follow her dream of working in comics, in spite of her parents’ disapproval and her sexual orientation, which she keeps secret. It’s the 1970s, after all, and the probability of a woman being a comic writer are slim to none – let alone one who is a lesbian. Carmen does the next best thing – working as the assistant to the editor-in-chief of Triumph Comics, Jeffrey Carlyle. She sees it as a stepping stone to writing, but Carlyle won’t have it. The industry is struggling and profit is what matters to him.

Unlike her boss, Carmen has a true passion for the medium. It stems from childhood trips to the drugstore with her father to buy comics – she fondly remembers these bonding sessions. More than 20 years later she is still in awe every time she opens a good comic.

When editor and colleague Harvey Stern approaches Carmen to collaborate on a new series, her dream suddenly becomes possible. There’s only one snag – it will be published under Harvey’s name alone. But Carmen knows it’s the only chance she’ll get and they create Claudia Calla and her alter ego The Legendary Lynx.

There are many similarities between Carmen and Lynx. Both are strong women fighting the system to make themselves heard. Carmen is surrounded by men who are mediocre at their jobs and she has to work twice as hard to gain the same recognition as her male colleagues. Missing Miami, she never quite feels as if she belongs. Just like Lynx, she is an outsider.

Gradually, Carmen grows more and more similar to the Lynx character. When her black coat is described as enveloping her like a cape it conjures a recognisable superhero likeness. You begin to wonder whether Carmen will eventually morph into a real-life crime fighter.

Soon after their collaboration Carmen discovers Harvey in his flat with a single bullethole to the head. She starts poking around, wondering what The Legendary Lynx would do to find the murderer. In playing detective she steps on the toes of the real investigating officer, Detective Mary Hudson, a woman with an inherent ability to spot Carmen’s lies. Carmen has nothing to hide regarding the murder, but she needs to keep her and Harvey’s secret safe.

On top of finding Harvey’s killer and dodging the detective’s questions, Carmen also has to deal with her married, unstable ex-lover, Katherine. Plus, she wants to ensure the Lynx series continues despite Harvey’s death. Carmen has a lot on her plate, but fortunately she has Rick Berger, Triumph Comics’ most senior editor, and legendary comic book artist, Doug Detmer, on her side.

Segura’s immersion in the world of comics shows and fascinating details surrounding the subculture seep from the pages of Secret Identity. His knowledge of the industry is irrefutable. To further impassion readers, panels of Lynx’s narrative drawn by Sandy Jarrell are inserted between some chapters, making the story tangible and reminding us of the comic book aesthetic as we read.

Comic lovers will devour this novel. Lovers of hardboiled noir will revel in its writing style and deadpan one-liners echoing early American detective fiction. This isn’t just a love letter to 1970s New York or hardboiled crime fiction, it’s a heartfelt love letter to comics, too.