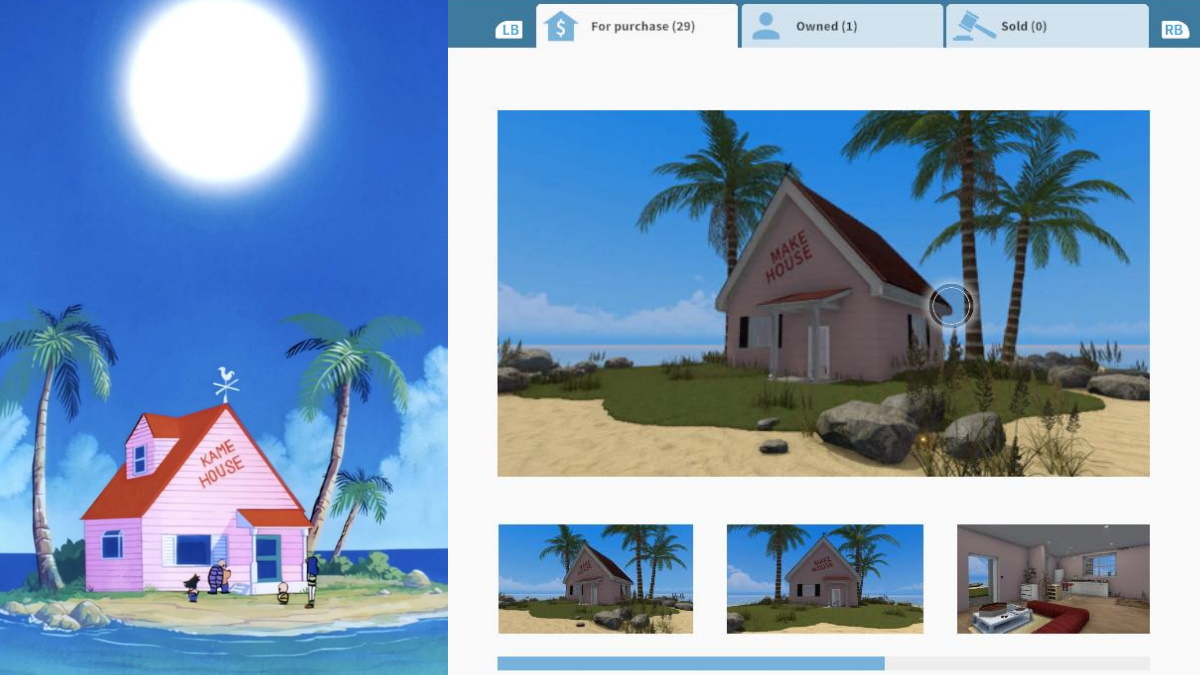 Every now and then I scroll through the Xbox Game Pass library to see what games have been added. Last night, I noticed that a game called House Flipper had been added to Game Pass. As someone whose guilty pleasure starts with an HG and ends with a TV, I had to check the game out. I fully admit to being the person who yells at the couple who wants a house on the beach in the middle of the city center with five bedrooms and a pool for $500 a month.

I’ve generally only played house decorating games that are disguised as match games where winning each round lets you clear out cobwebs and add one of three colors to your new bedspread. After playing House Flipper for an hour I have to say that it’s surprisingly fun. It’s kinda relaxing to just sit back, click a button, pick up the trash, and paint the walls. As I got closer to having enough money to buy and flip my first house, I scrolled through the selection of houses and saw something I wasn’t expecting to see. There are a couple of silly choices, like a house on the moon, but there’s also an iconic house straight out of Dragon Ball Z.

What exactly is House Flipper?

Handyman at your service!

You’ve got to earn it around here before you purchase your first property. No worries though! Luckily, there’s plenty of work at your fingertips! Take job offers from nearby residents – clean up, paint walls, install heaters, showers, and air conditioners, or even furnish their whole property! Once the grateful clients pay you for your solid work, it’s time to get your own house.

Grab your hammer! It’s time to take a bit of a rude approach and knock some walls down! Get rid of broken glass shards, litter, and leftover pieces of furniture, to prepare the place for a complete makeover! It’s up to you to either meet every single requirement of specific buyers or make yourself a cozy office to grow your business in.

Fortunately, you’re not alone. The set of your trustiest tools is here with ya! With the help of your paint roller, window cleaner, plaster tool, mop, hammer, and of course, the mighty tablet, no renovation will scare you! Using those tools also gives you experience, which can be used to upgrade them and polish your skills, making your work even more pleasant.

Developed by Frozen District, House Flipper was originally released on Steam back in 2018. It’s been on Xbox since 2020 but just hit Xbox Game Pass this week. As the description says, you start out taking on jobs to earn money so you can buy and flip houses. Doing the work also unlocks skills that you can use in each house and in your own office – which is in need of a good home makeover.

I haven’t earned enough to buy a house yet (I’m almost there, though), but I can already tell there’s a bit of strategy involved. You have to decide how much you want to spend on fixing up each house, and that includes fixing up your own office. I’m gonna assume it’s in your best interest to get your office in order as you’ll be trying to resell the houses you fix up, which would mean taking on clients who’ll come to your office. When you start the game, you’re not too far off from being able to afford a house, but you’ll also want enough to buy everything you need to fix it up. This ranges from appliances to paint. The amount of money it costs to get some of these houses can be pretty expensive, but the more you put into it, the more you make back, and you can always take on the smaller jobs to earn extra cash.

How to get Master Roshi’s house

When scrolling through house options I came across, ahem, “Make House,” a clear homage to “Kame House” from the Dragon Ball franchise. It’s not just the outside of the house, but the inside also looks like that familiar living room where I’d watch Master Roshi drink (censored in the 90s) as everyone huddled around the television to see the outcome of Vegeta and Nappa’s arrival on Earth – among other major moments in the series.

The description of the house reads, “A hidden gem – a cozy house on a small island far out in the ocean. The previous owner is a renowned martial arts master, who left this place to start his own dojo.” Good for you, Roshi, I’m sure the dojo is next to a gym full of ladies in workout gear doing various exercises in front of a glass window.

The house costs over $90K ($90,453 to be exact). Unfortunately, you won’t be able to rely on a wish-granting dragon for this one, you’re gonna have to earn the money to buy the house yourself. As you can see from my screencap, I still have around $60K to make before I can afford it. Guess I’m gonna have to roll up my sleeves and throw away a whole lot of garbage for the folks in the neighborhood.

OF THE DEVIL – starring THE EXORCIST’s Eileen Deitz – Available Now on DVD and Digital
Chris Webber Partners With Quavo, Royce 5’9 & Raekwon For Cannabis Launch
Set For Life results: Tonight’s winning numbers for Thursday August 11, 2022
‘Tower of Fantasy’ Will Let You Highly Customize Your Character—Here’s How
16 Of The Best Digital Watches For Men To Upgrade Your Watch Game To The 21st Century (Updated 2022)