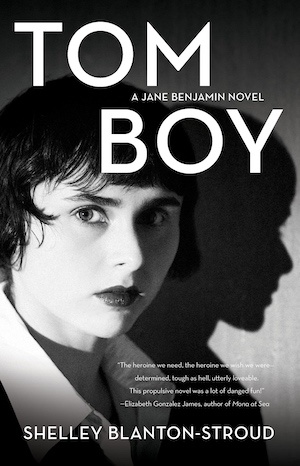 Tom Boy is the sequel to Copy Boy, with Shelley Blanton-Stroud bringing us the further adventures of cub reporter Jane Benjamin in a tale that is lighter than her first outing. Back then, Jane got a job as a copy boy with Prospect, a San Francisco newspaper, by pretending to be a young man, donning a suit and fedora. She was promoted to cub reporter by the managing editor, Mac, who promptly docked her pay rise when the subterfuge was detected.

Her career has been in limbo but there’s a new opportunity on the horizon. Prospect needs a gossip columnist and Jane has visions of herself as the new Hedda Hopper. A decision will be made soon.

Life at home with Rivka, Jane’s Czech landlady, is becoming fraught. Rivka is subsidising both Jane and her toddler half-sister, Elsie. Jane doesn’t trust her mother to look after Elsie, given her own experience growing up. Jane’s father was a philanderer and a drunk, her mother cruel and manipulative. She was often torn between the two.

It’s now June 1939 and local tennis star Tommie O’Rourke is the talk of the office as she heads to Wimbledon for the championships. The men don’t think female coach Carlson will be up to the task and laugh down Jane’s protestations to the contrary. Prospect publisher Edward Zimmer wants Jane to organise a train ticket to New York and passage on the Queen Mary to Southampton for one person. Jane sets about it but at this late stage only a third class berth on the ship is available. Zimmer doesn’t mind, it’s not for him but the young son of a friend, Pat O’Shea.

Then he delivers the blow – O’Shea is about to become Prospect’s gossip columnist. Jane is angry but still sets out to deliver the tickets to the young man. However, O’Shea is insensible in a bar and the train is about to leave. On the spur of the moment, she takes the tickets for herself. When she meets up with Zimmer he isn’t that disappointed. He was just doing a favour for a friend and his duty is now discharged. Leaving Rivka minding Elsie, Jane boards the Queen Mary hoping to prove herself worthy of the job en route.

Tommie is a sensation but her moment of triumph on court is ruined when the aforesaid coach Carlson drops dead. The assumption is she was killed by a heart attack brought on by her joy in her protégé’s victory. The tour is cut short.

Jane finds herself in Southampton with Tommie, saving her from the harassment of the press. The two young women become friends and Jane stays in Carlson’s room on the way home. Exposure to the privileged world of first class travel is an eye opener. Jane becomes a confidant of Tommie, her brother Frank, his boss Adam Lowe and Carlson’s niece, Helen. Does someone know more about Carlson’s death than they are letting on? Because something isn’t right…

Prospect needs gossip, and Jane wants to know what really happened to coach Carlson. Her new friendships will soon be tested and not everyone will survive the trip back to New York…

Tom Boy is a sharp, funny and endearing cosy crime read. The action is understated and there’s a lot of Jane’s story early on. However, it’s an intriguing one – partly about coming-of-age, and partly about the difficulties faced by women in the workplace, with the added intrigue of Jane’s gender fluidity. Jane is determined, intelligent and capable of using her masculine and feminine qualities to get what she wants. More than anything, she wants to be her own person.

As she discovers the truth behind Carlson’s death, she will have to decide how much of what she knows needs to be made public – a nutty moral conundrum. The truth has consequences. Is she prepared to sacrifice a scoop for the sake of doing the right thing, and clever enough to deliver something that secures the gossip column job? There’s a wonderful sense of time and place and the contrast between the rich and poor world, in the context of the sexual politics of the day. Plus, there’s a lot of fun to be had here.

For another cosy take on the female journo-sleuth try Fiona Veitch Smith’s The Crystal Crypt.