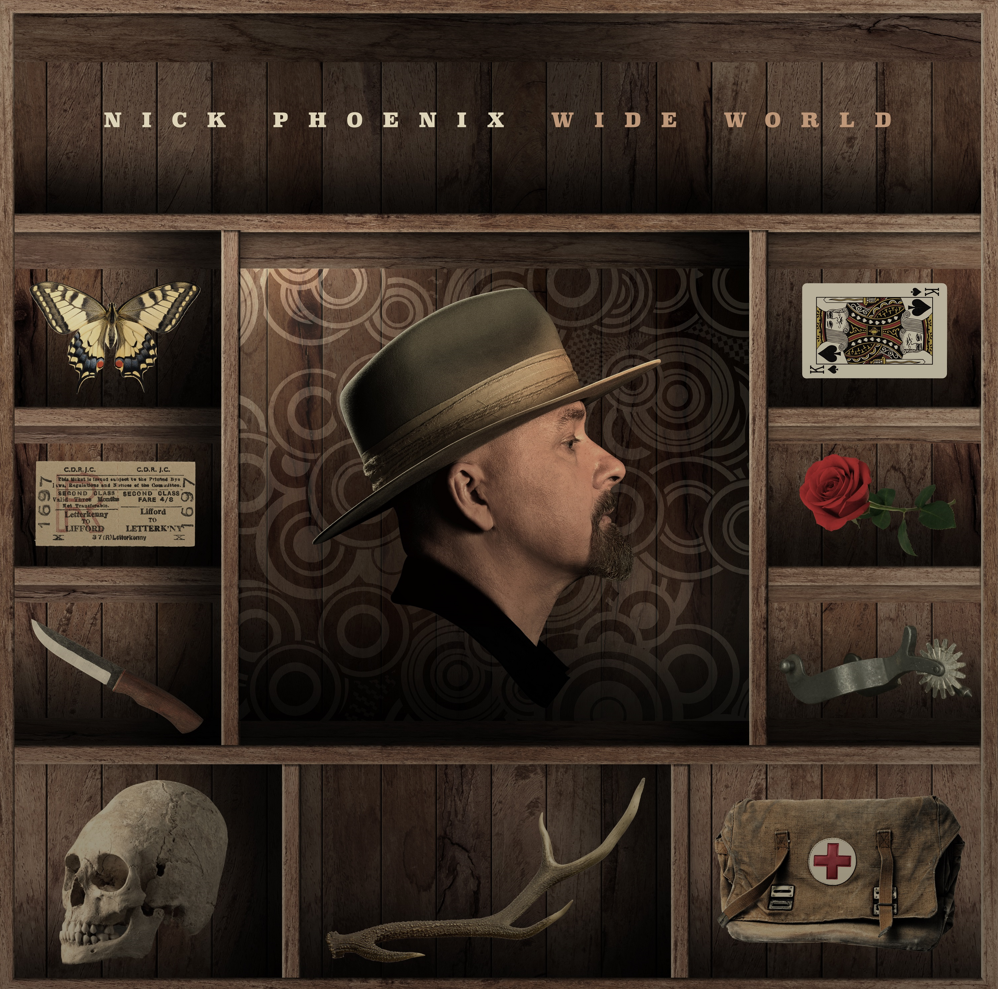 The first song on Nick Phoenix’s second album Wide World, “Wide World”, is an excellent introduction for listeners encountering the Los Angeles-based \singer/songwriter for the first time. It has some differences with many of the album’s remaining tracks this review will address later, but the title song boasts many of the qualities that have served as Phoenix’s stock in trade over two releases and counting.

He has a focused and economical style as a lyric writer. No one will confuse Phoenix for Bob Dylan’s second coming, but his rhymes are seldom forced, and the words hold up, to an extent, when separated from the music. This helps illustrate another strength. His superb phrasing talents as a vocalist help the lyrics for “Wide World” and later tracks seem like more than they really are. Phoenix’s ability to dramatize his material is one of my chief takeaways from this track.

The light prog rock affectations return, however, with “Rise Up”. Don’t worry though. It’s refreshing to hear how well Phoenix handles that sound without ever slipping into full-on self-indulgence. You can hear how each song takes a measured pace, there’s nothing rushed, and Phoenix understands how different songs need to breathe. The post-production effects applied here and elsewhere on the album may strike some listeners as unnecessary, but it is clearly part of a vision he has for the release.

His lyrics for “Tumblin’ Down” have a level of clipped specificity that makes this song particularly memorable. They’re quite pointed at times and markedly different from many of the album’s other tracks. It has, arguably, one of the album’s best arrangements and the guitar work bites harder than anywhere else.

There’s a near progressive edge present in some tracks. It’s much more akin though to Pink Floydian prog-rock instead of Yes and there’s an audible pop sensibility in the music. Phoenix loves ballads. “If I Let You Go” shies away from progressive tendencies though the big production style remains. The luxurious ballad chronicles love as much as heartbreak, so there’s a lovely, rounded quality elevating the song, and his sensitive reading of the lyrics raises it several notches. The guitar break during the song’s second half is a highlight.

The closer “He Knows Enough” bookends neatly with the title song while expanding his musical canvas. He’s written a multi-movement cut that never sounds stitched together from disparate strands but, instead, boasts quasi-storytelling strengths in the way it unfolds for listeners. Pulling this off without ever sounding pretentious is quite a feat, but he makes it sound easy.

Phoenix’s interest in producing an unified musical statement rather than a hodgepodge of styles is a shrewd choice. He’s trying to make a name for himself as a solo performer after years of building the reputation of his film and television music company and #1 streaming artist for that style Two Steps from Hell. Serving up a consistent style for listeners helps shape expectations for his growing fanbase while there’s plenty of wiggle room to continue growing with future releases.

There’s a lot to love about these songs and it’s an overall powerful release that shows him gathering momentum. Nick Phoenix’s songs on Wide World are those rare compositions that perfectly balance the personal and the universal in a way every listener will understand.