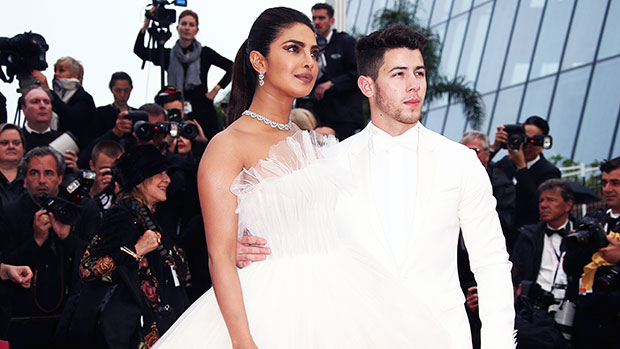 Former Disney Channel star Nick Jonas and actress Priyanka Chopra are one of Hollywood’s hottest power couples. The pair, whose love story began when the Jonas Brothers singer slid into her DMs, look more in love every time we see them! With news that they’re now sharing that love with a new baby, we’re looking back at the timeline of their romance!

Nick slides into Priyanka’s DMs in 2016

Talk about modern-day romance! The Camp Rock star made the first move by sending his future wife a Twitter DM, which read, “I’m hearing from a few mutual friends that we should meet,” Nick told Vogue. Priyanka replied the same day, “My team can read this. Why don’t you just text me.” The couple had a mutual friend in Graham Rogers, who starred in Quantico with Priyanka and Careful What You Wish For with Nick. The singer later recalled telling Graham, “Priyanka. Is. Wow.”

The pair had texted back and forth for some time and eventually met for a drink at the Carlyle hotel in New York, they told Vogue. They went back to Priyanka’s apartment, where Nick met her mom for the first time. One week later, the duo walked arm-in-arm up the steps of The Met for the 2017 Met Gala. They both wore Ralph Lauren outfits, with Priyanka turning heads in her trench coat-inspired dress featuring a 20-foot train! Priyanka later explained that they attended under the guise of wearing the same designer — nobody had suspected the pair may have been dating. “We were both wearing Ralph Lauren, and we decided to go together. It was fun,” she said during a Jimmy Kimmel Live! appearance. “We were at the same table. I mean, we know each other, so we were just like, ‘Hey let’s go together,’ and I was like, ‘Okay, let’s go together.’ And it just ended up working out.”

The couple gets engaged

Romance rumors had died down for almost a year, until the couple were spotted out and about in the summer of 2018. In late June, Nick shared his first IG Story of Priyanka, seemingly confirming the relationship, and fans couldn’t get enough! Less than one month later, they revealed some very exciting news: they were engaged! Nick got down on one knee in Crete, Greece on midnight after his future wife’s July 18 birthday. He popped the question with a Tiffany & Co. ring, which he had picked out a few weeks prior when he shut down the London store. “I said: Will you make me the happiest man in the world and marry me?” he later recalled. “No joke—she took about 45 seconds. Forty-five seconds of silence.” Of course, Priyanka said yes, and they were officially engaged!

They wed in a traditional Hindu ceremony

The Jonas-Chopra three-day extravaganza was definitely one for the ages! Their days-long nuptials took place in India at the Taj Umaid Bhawan Palace in Jodhpur. The luxe palace, which stretches across 26 acres of land, is the sixth-largest private residence in the world. Celebrations began on November 30 with “pre-wedding rituals” Priyanka explained to Ellen DeGeneres in early 2019. “It was just three days. One Indian ceremony and one Western Christian ceremony and one day of pre-rituals which we have in the Hindu wedding,” she said. “Usually, Indian weddings are like a thousand people, at least. We had only 200, which was mostly family – both of us have giant families. We wanted to keep it super intimate.” For the Hindu ceremony, Priyanka wore a ruby red lehenga designed by Sabyasachi.

As for the Western ceremony, Priyanka wore a hand-beaded and hand-embroidered Ralph Lauren gown which took 1,826 hours to create! To top it off, Priyanka walked down the aisle with a 75-foot long veil. Nick’s tuxedo was also designed by Ralph Lauren to complement his bride, and his father Paul Kevin Jonas Sr. officiated the wedding. Talk about a fairytale romance!

When the Jonas Brothers announced their return to the music scene with their hit song “Sucker”, Nick, Kevin and Joe, joined forces with their leading ladies (Kevin’s wife Danielle Jonas, Joe’s future wife Sophie Turner, and Priyanka) for a colorful music video. “I actually didn’t know much about [The Jonas Brothers],” Priyanka previously told Ellen. “Nick and I both didn’t know much about each other, so we did a show-and-tell after we started dating where we showed each other our work from when we were younger — the embarrassing stuff, like the horrible things. It was great. That’s how we got to know each other’s careers.”

Although they walked the carpet together years prior, 2019 marked the first time Nick and Priyanka attended as a couple. Given the theme of the ball was camp, the brunette beauty wore a grey Dior gown, complete with a cape featuring colorful, floor-gazing feathers. Nick suited up in an all-white look with glittering jeweled accents. Their relationship has truly been going from strength to strength ever since, and we can’t wait to see what they do next!

Almost five years since Nick first slid into Priyanka’s DMs, and three years after they tied the knot, the lovebirds became parents for the first time. The couple revealed they were parents on Jan. 21, 2021. “We are overjoyed to confirm that we have welcomed a baby via surrogate,” the two said in statements posted to their respective Instagram accounts. “We respectfully ask for privacy during this special time as we focus on our family.”

The announcement came after Priyanka said that she and Nick were considering starting a family, but not yet. “They’re a big part of our desire for the future,” Priyanka told Vanity Fair. “By God’s grace, when it happens, it happens.”