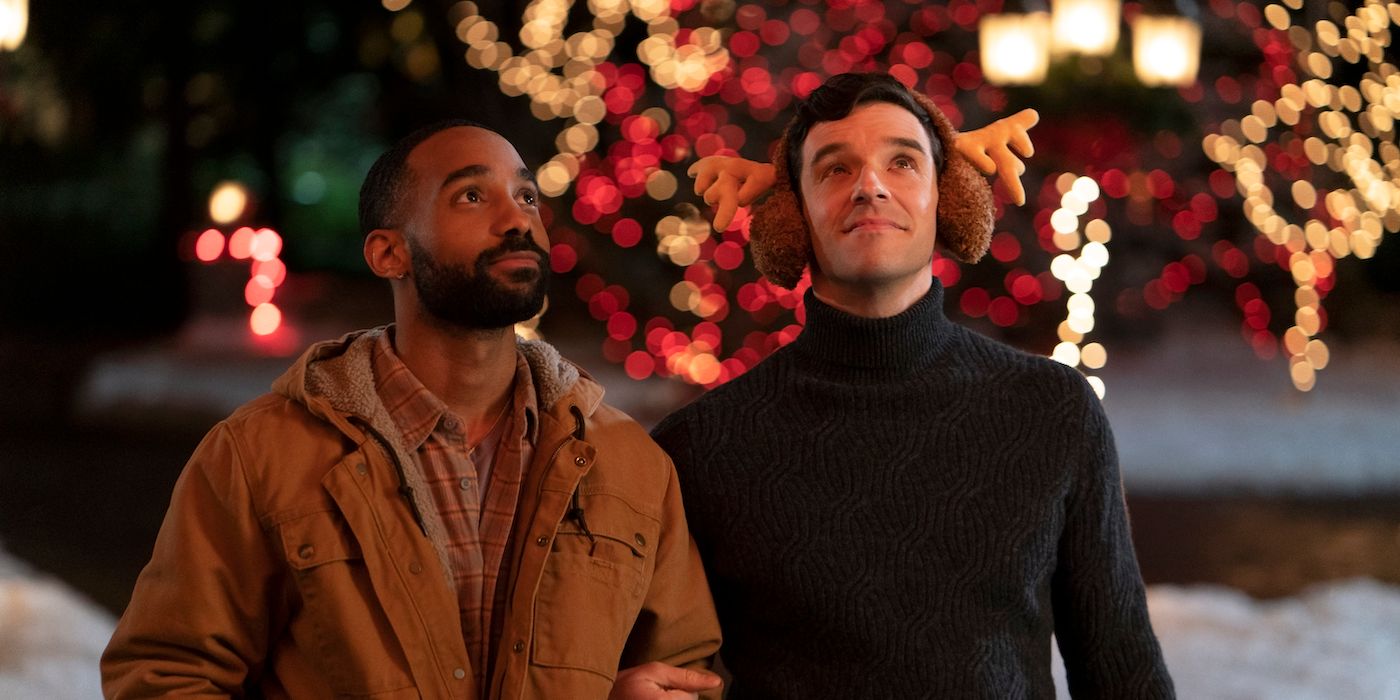 Single All The Way is the first gay holiday romantic comedy distributed by Netflix. Yes, even in 2021, we’re still making note of such monumental steps forward for representation for the LGBTQ+ community. For this production, producer Joel S. Fry, director Michael Mayer and screenwriter Chad Hodge pull out all the stops to make Single All The Way worth the wait. With an underlying theme of love and acceptance, Single All The Way blossoms into a funny, delightful, and heartwarming romcom gift for all.

Michael Urie plays Peter, who is down on his luck with love. After an abrupt end to a blossoming new relationship, Peter enlists the help of his best friend and roommate Nick (Philemon Chambers) to join him in New Hampshire for Christmas with his family. The plan is to pretend to be a couple to appease his overzealous family, which includes Kathy Najimy as his mother Carole and gay icon Jennifer Coolidge as Aunt Sandy. They lead an ensemble cast that is littered with exceptional talent from some fan-favorite shows including like Schitt’s Creek’s Jennifer Robertson and Killjoys’ Luke Macfarlane.

While Urie and Chambers are stand-outs as the romantic leads, the film is truly a delight due to the ensemble cast. With a story that is a tad cliché, the film does the unthinkable — it has interesting characters that are played by exceptional talents! Gay actors playing gay characters is a plus, too. Part of the charm of this film is the writing. It is quick-witted, sincere, and has a propulsive energy that never wains or feels outdated. Bringing it to life is a cast that knows how to deliver their lines with the right amount of comedic charm and cheesy Christmas cheer. Everyone truly is giving it their all, and it is thrilling. Perhaps it is too early to claim it as such, but Single All The Way is among the best Christmas movies to come from Netflix yet. Actually, it might be the best, but one should consider that the blinding charm of this ensemble tips the scales.

Urie and Chambers are truly wonderful. Many will know Urie from his plethora of excellent TV credits, but here he is truly firing on all cylinders. Ugly Betty’s Marc St. James will always find a way to peek through, but Urie dazzles as a very funny, charming, hapless guy desperate to find an epic love. Paired with Chambers’ calming demeanor and easy charisma, the duo will easily captivate audiences. As for Chambers, his star is as bright as his smile. With this being his feature film debut, one can only imagine what great things await him in the future. The chemistry between the pair is palpable, but it’s helped along by Single All the Way’s well-written screenplay. From how they banter, joke, and communicate with each other, there is often so much said and a lot of it means something to their relationship. Furthermore, the “let’s pretend we are a couple” narrative doesn’t play out the way one would think. Rather, Hodge leverages that trope to give his characters a more sincere and compelling romantic narrative. Great writing paired with excellent performances make Peter and Nick one of the strongest depictions of a couple within this genre.

Single All The Way has all the hallmarks of a typical Christmas romantic comedy, but what gives Single All The Way an edge, other than featuring a gay couple as the leads, is the film being a whole lot of fun. It also looks much better than the typical Christmas romcom, many thanks to director Michael Mayer and cinematographer Eric Cayla. The holiday  film doesn’t feel like it’s catering to a straight audience, hoping that they can accept a gay couple. With the inclusion of Najimy and Coolidge, who are beloved by everyone, especially members of the LGBTQ+ community, the film feels like it was made with the community in mind. There isn’t great strife regarding Peter’s sexual orientation; the film is instead filled with love, respect, and queer joy. There are two significant musical numbers, one of which is a montage set to Whitney Houston’s rendition of “Joy to the World” while the other is an adorable dance number set to Britney Spears’ “My Only Wish (This Year).”

At the heart of the film, there is a truly lovely friendship that has depth and soul, which blossoms into a beautiful relationship. Nothing about Single All The Way feels shallow and it doesn’t try too hard to remind viewers that this is a romantic comedy about a gay couple. Through Hodge’s writing and Urie and Chambers’s leading performances, the film aims to feel genuine and specific to these characters’ experiences — and it succeeds. Single All The Way is nothing short of delightful. Urie and Chambers lead a fun and charismatic ensemble cast, with each frame of the film made with love and care. Hodge wrote a film that feels unique to these specific characters and it shows. The film is full of sincerity and warmth, but it never loses any of its momentum to overly sentimental remarks or grandiose ideas of what Christmas is or should be. Single All the Way is a story about unconditional love, a beautiful message about chosen family, the power of an enduring friendship, all wrapped up in a story that is humorous and joyful.

Next: Mixtape Review: A Wholesome Family Tale That Avoids Getting Too Mushy

Single All The Way begins streaming on Netflix on Thursday, December 2. The film is 101 minutes long and is rated TV-PG.