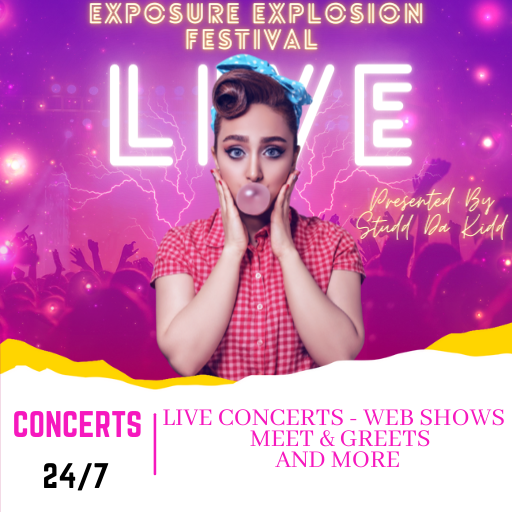 Live music is changing in a million different ways right now, and I’m not talking about the effect of COVID-19 on concertgoers alone. There’s a lot about the old guard in popular music and promotions that just doesn’t make any sense anymore – from the politics of regional scenes to the constant competing for air time on just a couple of really choice radio stations in a particular time zone, we’re in a different era that requires a different set of skills to survive in. That’s where Studd Da Kidd and her company TAMA Industries’ new app in Exposure Explosion Festival Live come in handy. Rather than putting your eggs in an old-school basket ready to crumble under the pressure, this is an app that has all the angles covered for you up front.

Studd Da Kidd could be just about anybody and I would give her app a fair shake – that’s the kind of smartphone user I happen to be. That said, when it comes to music, I like to consider myself a little more serious than most people; the Exposure Explosion Festival Live app isn’t a generic product that was made for the casual musician who wants to get a couple of likes on Facebook, but instead, the career players and promoters who make the business’ heartbeat even in the darkest of times. Artist-centric opportunities immediately make this distinguishable from the competition, of which there is more than the parent company’s fair share at the moment.

The social aspects of Exposure Explosion Festival Live make it a really interesting app to download, but getting to perform live and set parameters for everything from ticket sales to merchandising, networking and beyond is something that I just haven’t encountered anywhere else now or in the past. Studd Da Kidd isn’t just trying to make another TikTok or YouTube – she wants to get musicians connecting and the people who can take an underground career from the shadows and put it in the spotlight. It’s an ambitious project, but something tells me that the experience she’s had as a lifelong industry hustler is enough to make this entire effort a very worthy one, to put it quite mildly.

I can’t wait to get an actual look at Exposure Explosion Festival Live a little later this year when it debuts for the very first time, but if we’re to believe anything that we’ve heard about its offerings in the lead up to its arrival, I think it’s safe to say that we’re going to be witnessing a watershed moment for this business and those of us still keeping it going through what has been the craziest, most unpredictable two-year stretch in the history of the game. There’s still a lot of ground for Studd Da Kidd to cover, but just for the record, I don’t believe that she’s currently got a rival that she needs to worry about overtaking her place in the underground hierarchy for anything.