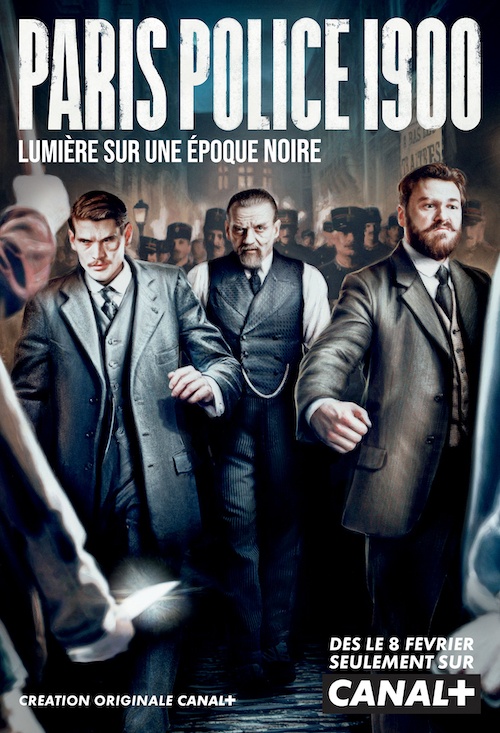 For anyone who loves historical crime fiction, Paris Police 1900 is a sensory treat with an intriguing and often terrifying story at its heart. Airing through October 2021 on Saturday evenings on BBC Four, it’s packed with period accuracy, political finagling, brutal violence, mystery and – yes – plenty of French eccentricity. From well to do ladies injecting heroin while listening to Chopin, through to anarchists disrupting antisemite rallies and on to a demon-summoning séance, Paris Police will have you glued to the screen. You might even be tempted to binge it on iPlayer.

Episode one begins in 1899 with the death of the president of the republic, Félix Faure. He dies of heart failure while receiving a sexual favour from his mistress, Marguerite ‘Meg’ Steinheil (Evelyn Brochu) – both are real life historical figures. Meg is subsequently recruited as an informer by Puybaraud (Patrick D’Assumçao) and Fiersi (Thibaut Evrard) who are officially policemen but unofficially carry out black ops for the French state, ungoverned by the police hierarchy. They’re wary of any secrets Meg may have getting to the press, and also recognise her talents for deception.

Then there’s the lowly police detective Antoine Jouin, the central character of the show, played by Jérémie Lahuerta. Unlike his jaded colleagues, he’s passionate about justice but sees corruption and exploitation all around him. Things go wrong when he tries to help a woman called Hélène Chagnole, whose abusive husband, 30 years her senior, is trying to have her imprisoned for adultery. Monsieur Chagnolle is a low-ranking civil servant but is politically affiliated with the Antisemitic League – another crucial force in the story.

The League is whipping up hatred against Jews across France at a particularly trying point in the country’s history. Alfred Dreyfus, a French Jewish army officer, is about to be retried for treason. The Guérin family – Louis, Jules and their Maman – run abattoirs and butcheries on an industrial scale across Paris and are the leaders of the Antisemitic League. Their anti-Jewish propaganda, intimidation of the public and media war against the police are destabilising the city. So Puybaraud and Fiersi send Meg to spy on them.

The police service itself is about to be shaken up by former colonial official Louis Lépine (Marc Barbé), another real historical figure who is key in the story. He is returning as police commissioner to try and calm things down in Paris as the Dreyfus trial looms and rival political groups mass on the streets. A coup d’état is brewing – there are even hints at restoring the monarchy in Franc. As hard-nosed and cynical as he must be to run the police, at home Lépine is struggling to support his wife (Valérie Dashwood), whose drug addiction could weaken his position.

With all of this going on around him, Jouin is assigned to help solve a curious case – literally. Because a suitcase has been retrieved from la Seine containing the torso of a woman. Trying to find out who the woman is and who killed her puts him on course to clash with the meddling secret police, Puybaraud and Fiersi. The latter of the two is a fascinating character, perhaps the dark horse of the story. You’ll see him beat a man nearly to death, then go home and sit his daughter on his knee, cracking his bruised knuckles. There’s a sense that the dark void in his heart is starting to bother him…

Paris Police 1900 is a visual treat. Early art deco furnishings and décor abound, beautiful vistas of 19th Century Paris in all its pomp are juxtaposed with grubby tenements. It’s easy to see why the political situation is cranking up when there’s so much poverty alongside the decadence la belle époque, making it reminiscent of an earlier period in France’s history… And there are parallels with today as well. Issues we still face, such as antisemitism, sexism, fake news and police and political corruption, tear through this story harshly and blatantly. Plus ça change… They are direct contributors to the murders that take place, and the suffering of the characters.

Paris Police 1900 consists of eight hour-long episodes, and was created by writer-director Fabien Nury, who wrote The Death of Stalin. It was broadcast in France by Canal+ earlier in 2021. It will be surprising if it isn’t nominated for some awards, and it would be great to see this story adapted as a novel or graphic novel.

If you loved Babylon Berlin, set just two decades later, mark Paris Police 1900 down as one to watch. There are times when the story moves along a bit too quickly, and one or two things don’t quite make sense, but the atmosphere and drama are present and correct. Watch for a fine performance by Eugénie Derouand asJeanne Chauvin the young lawyer who can’t practice because of her gender, whom Jouin falls in love with. Crime fiction at its most entertaining, but not for the faint hearted.

If you’ve watched it, please tell us what you think by commenting below.