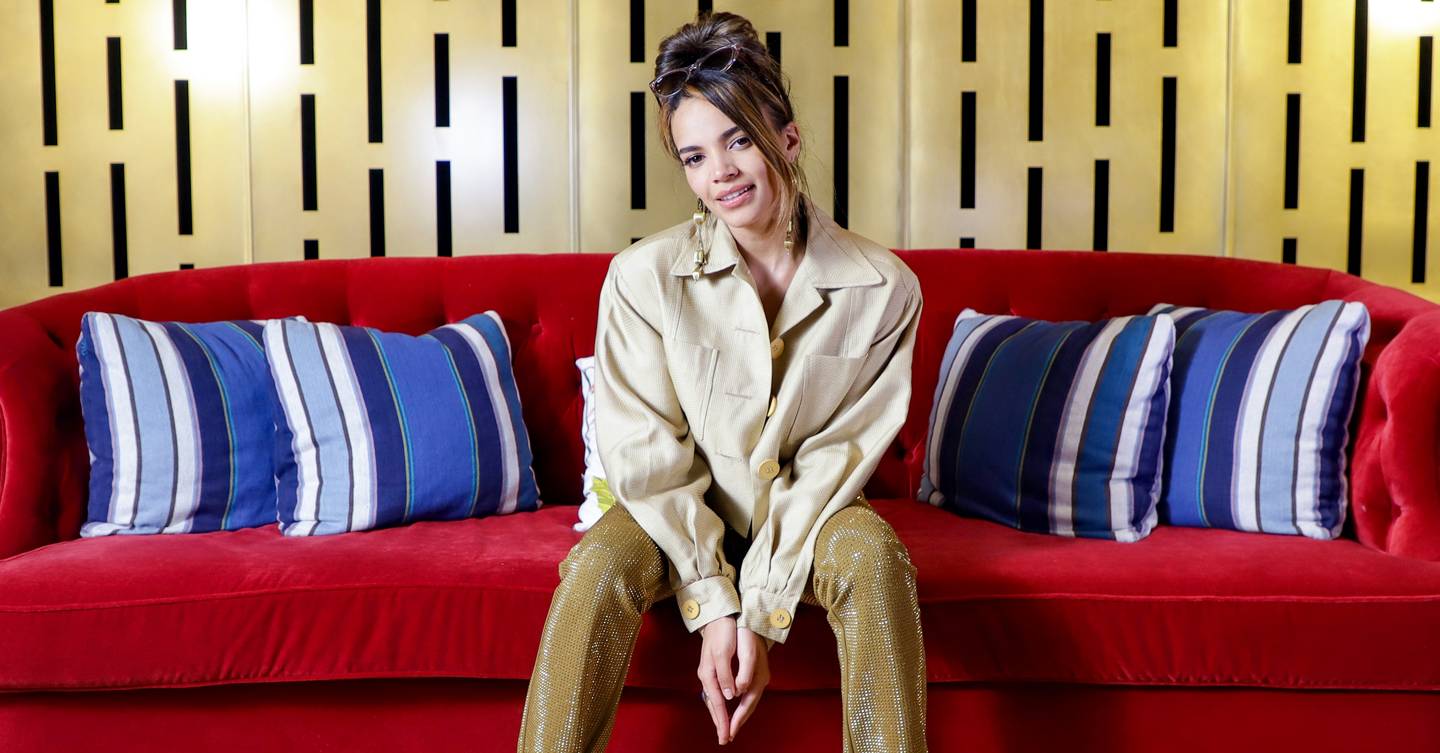 Towards the end of our interview, In The Heights star Leslie Grace starts to get teary. She is recounting the story of how she used to help out in her mother’s salon in New York’s the Bronx and how much a movie like In The Heights, which seeks to represent the Latinx experience in all it’s joyful glory, would have helped her.

It’s hard not to get emotional in return as it’s palpable how much this movie means to her and her community. In the Heights, based on Hamilton creator Lin Manuel Miranda’s musical of the same name, follows a group of first generation immigrants ranging across Puerto Rico, Cuba and the D.R singing and dancing their way through their struggles, their joy and their relationships in the northern tip of Manhattan. Whilst it speaks to the Latinx experience around questions of representation and identity, it also speaks of community, family pressure and coming to terms with yourself – something which makes the film a story for all.

At the heart of it all is Leslie Grace’s Nina Rosario who goes against her father and community’s dreams and quits Stanford University and returns to the neighbourhood carrying her secret and shame. But whilst this may be the 26 year-old’s first role on the big screen she has already racked up three Latin Grammy Award nominations to her name, collaborations with the likes of Becky G and Maluma and one million Instagram followers to her name – but that didn’t stop her doubting herself as I found out as we zoomed into her LA home.

Here, Leslie opens up about feeling ‘unworthy’ of starring in the movie, the times she had to explain ‘how I look’ after moving to an un-diverse neighbourhood as a child and what she would say to her younger self who was working in her mother’s Bronx salon…

In The Heights is sen-fricking-ensational! I love how it deals with representation and joy at the same time, which is so powerful. When you were filming how much did you think, ‘Wow, this would have helped me so much when I was younger’?

We thought about that all the time! I felt almost unworthy of the experience because I knew that so many people didn’t have this. None of us really had on screen people that looked like us, and a lot of times a lot of people in the Latinx community, but especially Afro-Latino community, don’t really get to see themselves on screen when we did get to see stories about the Latinx community. I did feel unworthy, and on my first gig as an actress, to be so privileged. I’m from New York, I have family in the Heights that so many times stumbled upon set, and they were like, “Yo, this is my block. What are you doing here? You’re shooting something here?”

Love that – did your family embarrass you on set by just turning up?

Sometimes! It just made it all the more enjoyable and it felt surreal. It also set the bar like, ‘Now we’ve done this, we can dream even bigger!’ That’s what we want everyone, no matter where you’re from, whether you’re part of the Latinx community or not, for you to watch this movie and feel like, especially little boys and girls and the young generation that’s looking to see someone that’s maybe different on screen, for them to say, ‘I can dream bigger. They did that, I can dream even bigger.’ It was electric, it was validating to be able to walk on a set like that every day in a place that felt so familiar to me.

What’s your own journey been like with self validation and finding validation?

Well, this experience was definitely a big one for me in terms of self validation for a lot of reasons. I related a lot to Nina in the ways that she feels a little bit ‘otherised’ when she goes to Stanford. I was born in the Bronx, raised in Yonkers and then when I was 10, we moved to Davie, Florida where there was not a lot of diversity, at least not in 2005 when I was in fifth grade! Before then I never had to really explain who I was or how I looked, and I never knew that that was even a question that people ask people, because I grew up in a melting pot. I grew up going to school with people that were from everywhere, looked different to me and there was nothing ever to question about that.

I also grew up with a mom who was a salon owner on a block in the Bronx and I saw all kinds of women and all kinds of beauty come in the door. So in the same way that Nina goes off to Stanford and has to answer for who she is in a predominantly white space, I had to do that at 10 without having a lot of language for it. Through Nina, I was able to process a lot of experiences that I never even thought affected me. It affected how I talked to myself, how I shrunk myself sometimes, even in the music industry and being Afro-Latina, what that meant and how that affected me.

Yeah! Even just coming into this and being a music artist and never having done anything on screen and this being such a huge film with Lin Manuel Miranda and Jon M. Chu (director of Crazy Rich Asians), and acting with my dad, Jimmy fricking Smits in this movie – what the heck?! In a way I was like, ‘I’m just a little music artist. I’ve done some stuff and I’ve worked really hard!’ I put all of that into Nina. The same way she feels like she’s earned her way to Stanford, this in a way was my Stanford, feeling like, ‘I have to prove that I can do this!’

So many times you are met with an obstacle at those moments, when you feel like, ‘This is my time.’ So, being met with this opportunity to play Nina in an honest and true way was definitely a way to reclaim the pride in my own story and my family’s stories, and the people that I know like the salon girls in the movie. I grew up as a salon girl at the front desk in our family business of my mom, literally having her salon a couple blocks from where we shot all summer. Those stories meant something to me, and they meant something to all of us. To be able to be a part of telling that story in a celebratory way allowed me to reclaim it, allowed us all to reclaim the pride in who we are and shatter that glass ceiling.

If you could go back to that girl who was working on that counter, helping out your mom out in the salon, what would you want to say to her?

Oh man, I am emotional just thinking about it. Those are formative times for me and my sisters and our family. They were some of the most beautiful times in my life. I value them and cherish them all so much more now, because they informed everything that allowed me to step into such a huge beautiful project like this one that has so much purpose, with the knowing of the beauty and the magic that’s in our experiences. Sometimes when we’re living through it we close our eyes to the beauty that is around us because we think that our dreams and our happiness is out there, and it’s not right here.

I’d say to her, ‘soak it up even more, soak it up as much as you can, because your experience is rich and valuable and somebody else is going to feel so validated from you knowing all of these stories.’ That’s what I’d say to anybody, wherever your block is, or a small neighborhood or a big city, know that there is value in your experiences and somebody might need to hear your story in order to feel like their story is valid.

In The Heights is in cinemas now.