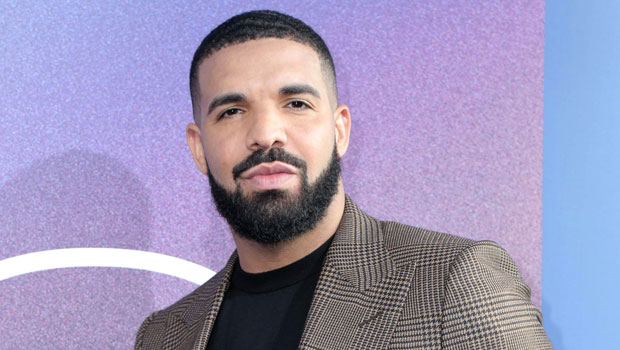 Sophie Brussaux took to Instagram to share several new photos of her and Drake’s adorable son Adonis posing in front of a car and one of her paintings.

Drake‘s son Adonis, 3, proved he’s growing up quickly and is as cute as can be in his most recent pics! The tot posed for his mom Sophie Brussaux, 31, in Instagram photos she shared on Apr. 17 and showed off his blonde curly hair and incredible smile. In three photos, he was posing in front of a black car with the doting mother and in another, he was posing in front of a colorful painting she created that appeared to have an eyeball in the middle of it.

In the pics with Sophie, who rocked pink hair, Adonis was wearing a neon orange jacket over a black top, black and tan patterned pants, and white and black sneakers. He was turning away in one and looking down in another and in the one where his face could be seen, he didn’t appear too thrilled to be taking the photo. Sophie cheekily captioned the pics in French and her words translated to “Take a photo with Mom please.”

Drake’s little guy fortunately looked much more ready to pose for the photo with the painting and even appeared happy about it. He was wearing a long-sleeved black top and the same pants as in the car photos, which indicated he most likely took it on the same day as the others. He also held what looked like a red toy car in his hand and Sophie revealed he actually photobombed the pic but she loved it in the caption.

“Was trying to take a high res pic of my latest painting, best photobomb ever… ma plus belle creation mon fils!” it read.

This isn’t the first time we’ve seen memorable pics of Adonis. He’s also posted for numerous photos with his doting dad. One of the most recent showed the 34-year-old resting his head on his little guy’s shoulder while laying down and closing his eyes. The sweet boy tilted his head to comfort his father as he held a blue bowl of a snack. Drake captioned the touching pic with a fingers crossed emoji.

Thai Horror Movie ‘The Convent’ Goes Heavy on the Nightmare Imagery in This Official Trailer
Ellen DeGeneres to end her talk show amid plunging ratings
Michelle Obama Praises The Weeknd For Shining A ‘Light’ In A Dark Time At The BRIT Awards
April Rose Gabrielli “Exclusively Signed With BMG”
Sofia & Nicole Richie on their first-ever fashion collab, staying sane during COVID and their evolving personal styles