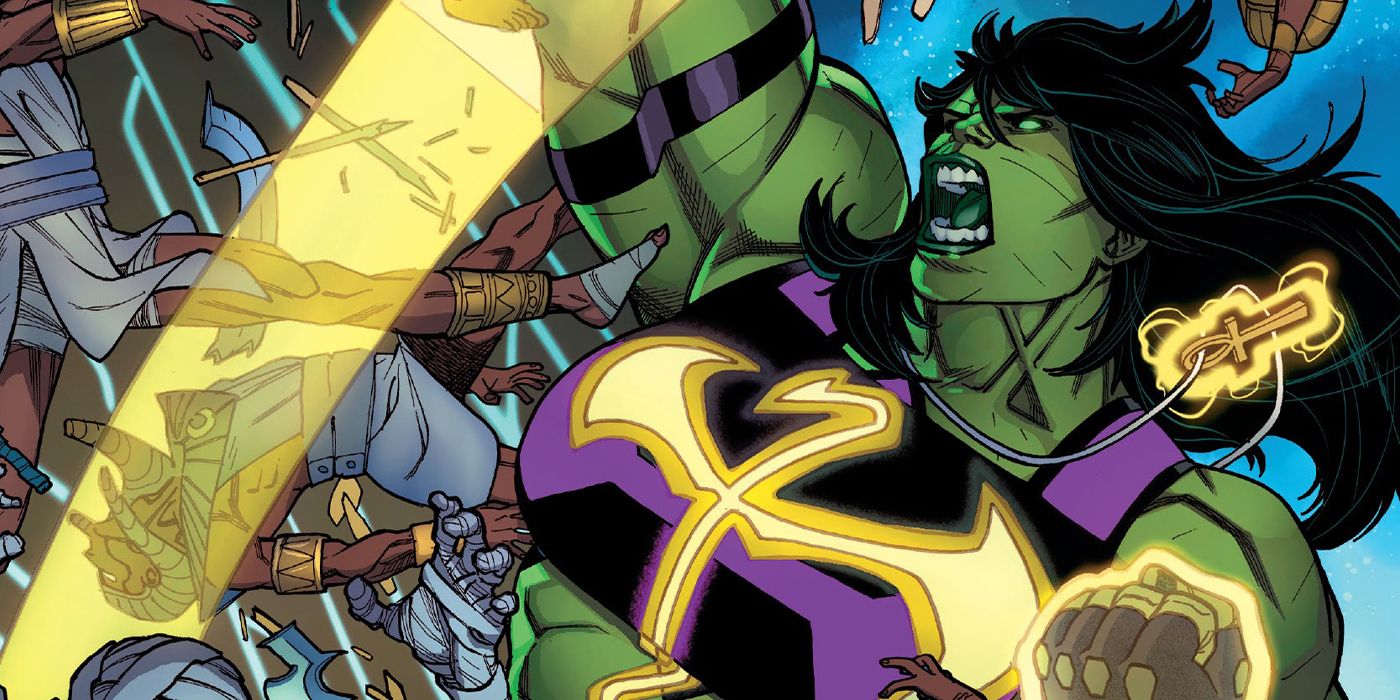 The powers of Marvel’s Iron Fist have changed hands many times over the years. From Wolverine, to Deadpool, and even Street Fighter favorite, Ryu, many have come to adorn the iconic dragon emblem. But in Avengers #37, the mystical force has been imbued in a new hero: She-Hulk, otherwise known as Jennifer Walters, and now The Iron Hulk.

In the most recent Avengers run, Khonshu and the Moon Knight were on a quest searching for anything that could help them defend against the impending return of Mephisto, which was filling their minds with horrific visions of what’s to come.  Between the two of them, they found a way to steal Thor’s hammer, merge with the Phoenix Force, become one with the Spirts of Vengeance, and somehow capture the powers of both the Sorcerer Supreme and Iron Fist. While Moon Knight eventually had a change of heart and extricated the Phoenix Force from his body and back into the cosmos, Khonshu was not as willing to do the same. So, before Moon Knight abdicated his new power, he used it to send Khonshu plummeting back to Earth, where the Black Panther and The Avengers were waiting to take him down for good and return the stolen powers back into safe hands.

While Ghost Rider Roberto Reyes takes back his own power from Khonshu and Thor retrieves his hammer from Moon Knight, Black Panther retrieves the rest of the stolen powers and gives them to the Avengers to use and keep safe. He hands one of them over to Blade and the other to She-Hulk, powerful gamma mutate. She-Hulk’s strength and intelligence is already a force to be reckoned with and while Blade becomes Sorcerer Supreme, She-Hulk garners a new title as The Iron Hulk. Add her existing powers to that of the Iron Fist and she’s now a whole new level of superhero… and boy does it show. Using her strength, now infused with the enhanced power of chi, she and her comrades are easily able to take down the rest of Khonshu’s followers. It’s quite the epic sight to see the iconic dragon emblem sprawled out in light across She-Hulks chest as she’s throws powerful punch after punch at her enemies.

Of course, as previously mentioned, She-Hulk is not the first Marvel hero to take on the name. There have canonically been many Iron Fists to have wielded the power of chi-enhanced physiology, but there are also many other well-established Marvel heroes who have temporarily held the role in other titles, spin-off stories, one-offs, or alternate universes. One of the most epic by far was when Wolverine embraced the title in the 2010 New Avengers series. The team combined their powers into Wolverine in order to defeat Agamotto. Needless to say it was quite the spectacle to see the likes of the Heroic Age of Avengers combined into one man.

It will be interesting to see how She-Hulks transformation into The Iron Hulk will manifest in the upcoming Enter the Phoenix series coming in November. But with Mephisto’s looming threat and the Phoenix Force now on the loose, the Avengers will most assuredly need all of man power, or in this instance, chi power, they can get.

Next: What Marvel Fans Get Wrong About Thanos & Death

Katie Michel is a gaming, D&D playing, Star Trek obsessing, book reading, filmmaking, Shakespeare loving, all around nerd based in Los Angeles, California. She found herself at Screen Rant through her love of writing and all things entertainment. A graduate of UC Santa Barbara’s Film and English programs, she aspires to write articles readers will be interested in on the same level she is regarding conversations about her favorite obscure foreign films.

Everything We Know About Netflix’s <i>Selena: The Series</i>
Meet Dixie Egerickx: the teenage star of The Secret Garden & new-gen role model who has a lot to say about climate change and mental health
Kim Kardashian Refused To Be Filmed From The Waist Down During ‘This Is Paris’ Interview, Director Claims
“What If Casey Becker Lived?”: Drew Barrymore Reprises Her ‘Scream’ Role for Short Skit [Video]
Stephen Colbert Ups Two ‘Late Show’ Veterans To Co-Executive Producer