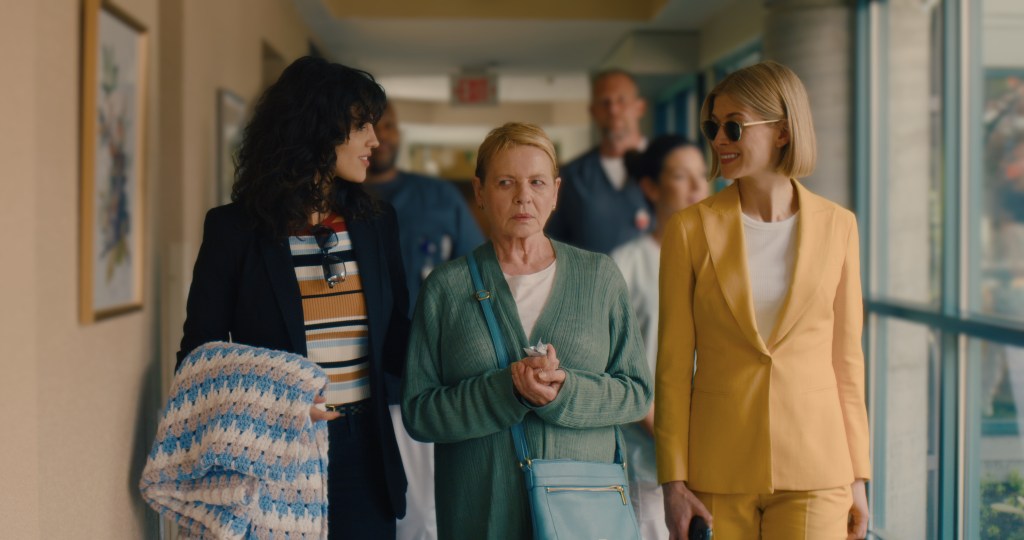 EXCLUSIVE: Netflix has taken its fourth major title in the 2020 Toronto Film Festival Market with a deal for I Care a Lot, the J Blakeson-directed dark comic satire that stars Rosamund Pike, Peter Dinklage, Eiza Gonzalez and Chris Messina. I’m told the deal is near $10 million for U.S. rights and the rights to select countries including Germany, Latin America, South Africa, the Middle East, and India.

Pike plays asteely con woman who targets the elderly by using legal machinations to become their legal guardian. She throws them into care facilities, takes away their cell phones and siphons their assets. But an ideal mark turns out to be less than that when it turns out the senior has someone in her life (Dinklage) who is as lawless and as ruthless as the guardian. These bad people go mano a mano in a series of lethal twists and turns in a film as dark and uncompromising as The Grifters. The film is getting great reviews, and sources said Netflix will be making an awards push for it. The performances by Pike as the conservator and Dinklage as the gangster in particular are being singled out.

The film was financed by Teddy Schwarzman’s Black Bear Pictures, and the film had a opening Saturday night TIFF gala premiere at the Ontario Drive-In in Toronto, with links provided to buyers who could not get across the Canadian border. Schwarzman produced with Ben Stillman, Michael Heimler, and Blakeson. Andrea Ajemian and Sacha Guttenstein are the exec producers.

Netflix got on the board with a $20 million deal for the Halle Berry-directed Bruised, and then spent $10 million for Pieces of a Woman, which played TIFF after premiering in Venice. Netflix then paid a whopping $30 million for the Sam Levinson-directed drama Malcolm & Marie with Zendaya and John David Washington. Add I Care A Lot, and Netflix restocked its film slate with $70 million of spending without its executives having to board a plane.

Add to that several other deals including the $20 million acquisition by Solstice Studios for the Mark Wahlberg-starrer Good Joe Bell and the $5 million paid by Vertical Entertainment and Redbox for the Roseanne Liang-directed Shadow in the Cloud, and we are looking at the most deal-filled Toronto Film Festival Market in as long as I can remember. That hopefully signals an appetite for content and better times around the corner.