“Sometimes I joke about how I wish the character wasn’t named Ramy,” Ramy Youssef says with a smile over Zoom from his new home in New York. He’s just moved in and took a few moments to work out the best place to sit for Wi-Fi so he can chat with ELLE.com about season 3 of his self-titled comedy series. “But I will say, the thing that I do like about it, is that I’m on the hook.”

Given the polarizing subject matter of this latest season of Ramy, ranging from the Israel-Palestine conflict, illegal abortions in Egypt, and near-catastrophic levels of toxic masculinity, that might be an understatement. But certainly, it’s nothing new for this multi-hyphenated Egyptian-American creative who has been pushing the boundaries for cross-cultural storytelling since before the show premiered in 2019.

A stand-up comedian from New Jersey who didn’t finish college, Youssef transferred his brand of observational humor, delivered through an Arab-American Muslim lens, from the stage to the small screen to critical acclaim. “Somewhere while making the first season, I had an idea of how the show would end,” says 31-year-old Youssef, who won a Golden Globe for lead actor in a comedy series for his first season of Ramy. “After making [season 1] it was clear to me what goes into this now and what we could have in the bank in terms of characters and plots. A show should either be strictly one thing like Larry David, or you should try and play with the character and let it grow and you can play with tone.”

The frequently cringe-inducing show, where “no subject is off the table,” centers on his eponymous lead, Ramy Hassan, who is striving for Islamic enlightenment but whose lifestyle and Millennial proclivities often get in the way of being a “moral” person. “We were tracking this ego death for the Ramy character, and that he started off with these high ideals of who he is, but we just kept stripping him back and bringing him closer to where he’s actually at,” Youssef says. “So bringing him to this place and making season [three] way more of an ensemble show, that’s something I’ve always wanted to do from the beginning.”

In fact, several episodes over the last three seasons don’t even feature the titular antihero at all. Instead, narrative space was made for the rest of the Hassan family to go through their own journeys of self-discovery. Made up of Ramy’s double-standards fighting sister Dena (May Calamawy); their well-meaning yet blunt, devout parents, Maysa (Hiam Abbass) and Farouk (Amr Waked); and their problematic, closeted uncle Naseem (Laith Nakli), they too are navigating various generational, ethnic, and religious conflicts in an American culture that’s as rife with microaggressions as it is with seemingly progressive attitudes. Critics and viewers alike have praised the writing of these characters for not adhering to the “bombers, billionaires, and belly dancers” stereotypes Western scribes love to saddle Arab characters with. Rather, Ramy allows them to be multidimensional in terms of their motives, humor, frustrations, and vulnerabilities that both Arab and non-Arab viewers can empathize with and be entertained by. Personally, I love that most of the main characters can be utter dicks because, realistically, we’ve all been there. We can all be guilty of shitty behavior even when our intentions are the best. This show isn’t about being perfect, just human—and that’s always been Youssef’s goal. 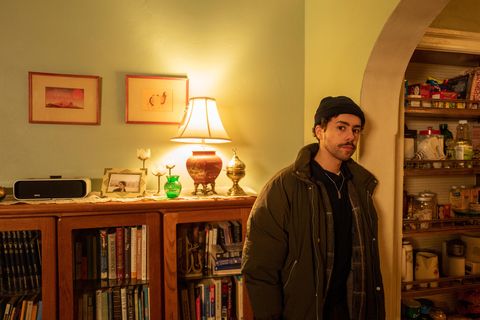 “The audience has this intimate exposure, like the inside of the computer, the inside of the heart, the inside of ego and jealousy and lust and anger,” he says. “Part of why people connect with these characters so much or why they’re even so upset sometimes about them is because they are striking real nerves. There’s something mirror-like about them where it’s like, ‘This is why I try to do something good, but what’s behind the good thing I’m trying to do?’ The show has always been about seeking spirituality. This season is also about the burden of capitalism and what that does to the soul.”

For fictional Ramy, that sees him get into the business of selling custom diamond jewelry with Naseem after messing up his marriage at the end of last season. However, in pursuit of financial gain, he causes familial strife after striking a deal with an Israeli trader through his Hasidic Jewish best pal Yuval (Julian Sergi) that takes him into Israel and Palestine, in a fraught episode entitled ‘Egyptian Cigarettes.’ The showrunner has long made a point of having as many culturally specific voices in the writing room as well on screen, and for this episode shot in Haifa and Jerusalem, which Palestinian Abbass produced, Youssef enlisted Palestinian filmmaker Annemarie Jacir after being impressed by her film Wajib. “We started writing that episode in February 2021 and that was before the viral attention grab around Sheikh Jarrah and what was happening at the time in Jerusalem,” Youssef says. “History will track that as a pivotal moment for Palestine entering the American consciousness in a more nuanced way. You would be shocked at how little awareness there was of what’s going on there in America.”

Viewers watching this season will become attuned to the oppressive restrictions faced by Palestinians as Ramy, in his typical dark humor, faces military checkpoints in order to meet a dating app match and accidentally causes the brutal detention of a Palestinian kid by IDF soldiers. The production hired a local crew who Youssef says were “grateful and shocked” that they were shooting an episode that didn’t shy away from the reality faced by those in the occupied territories. “For me the feeling was, how do we make a contribution that’s just human? How do you make a contribution that isn’t adding to the pain but is trying to bring human perspective to all of the characters that are involved?” Youssef says. “The level of difficulty of doing that was high.”

“For me the feeling was, how do we make a contribution that’s just human?”

It helped that most of the drama was caused by Ramy himself, through his ignorance and entitlement as a relatively privileged Arab-American compared to the Palestinian citizens he comes across. “Ramy tends to be the person at the receiving end of the blow—whether it be the joke, the tension or the plot issue—and I like designing the character that way because we can go to Palestine and Israel and somehow you can make him the asshole,” he adds. “In terms of the dynamic between a Muslim character and a Jewish character,” he says of the friendship between Ramy and Yuval, “I feel like there was so much respect in that relationship.”

One might imagine a little anxiety in the showrunner when tackling such subjects. Palestinian-American model Bella Hadid, who guest-starred this season, has been frequently attacked online for her unflinching support of the Free Palestine movement. For Youssef, there was never a moment of hesitation in the writers’ room. “I don’t like being in a situation where talking about a government or talking about the way borders are drawn is equated to meaning some sort of spiritual issue,” he explains. “If someone is upset, that’s their right if that’s how they want to react to it, but it’s not indicative of what’s actually there on the page. Just do what you feel is right, because if you try to make something and shape it based on the fear of perception, then it’s a losing battle.” 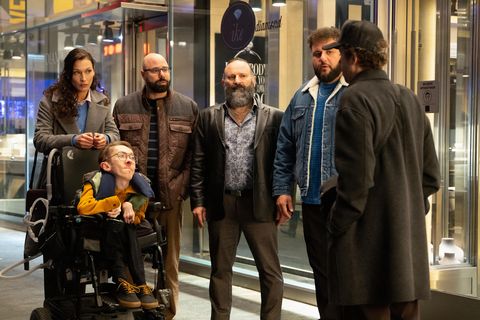 This attitude has served Youssef well in a series that continues to break boundaries and shift expectations. It’s also seen his MENA collaborators reap the benefits from its success: Mo Amer just launched his own self-titled comedy series on Netflix that grapples with his Palestinian-American heritage. Marvel Studios scooped up Nakli and Ramy writer and comedian Azhar Usman to star in Ms. Marvel while May Calamawy became the first Arab superhero in the MCU as Layla El-Faouly/Scarlet Scarab in Moon Knight. “We’re able to have so many cool people and give so many people good screen time,” Youssef says. “All of that is growing into something so much bigger than the show, than me, and that stuff is when you know it’s working.”

The work continues to be non-stop for the showrunner, who is developing a new show with Judd Apatow, just shot a movie with Yorgos Lanthimos, is wanting to finish off Ramy with a fourth and final season, and hopes to write and direct his first feature. But Youssef also hopes the type of culturally specific yet universally accessible stories he makes and adores will foster a better mindset for inclusive appreciation. “What we’re part of is hopefully ushering in conversations where a show made in Egypt or Malaysia is treated with the same integrity as something made in L.A.,” he says. “Not just the idea that we’re the ones who define the culture for the world, but that we’re sharing culture, we’re learning in different cultures, and we’re finding other cultures to be cool.”

Hanna Flint is a film and TV critic, writer and author with bylines at Empire, Time Out, Elle, Town & Country, the Guardian, BBC Culture and IGN. She is the author of  Strong Female Character, a movie-memoir-manifesto, loves Marvel, puns and when women tie their hair up in action scenes.

15 Best Spa Hotels in London in 2023
‘Stranger Things’ Star Finn Wolfhard Is Ready to Get Out of Hawkins
Stop Wasting Money At The Nail Salon: This LED Nail Lamp Is Nearly 40% Off
Lindsay Dougherty, Head of Hollywood’s Teamsters Local 399, Urges Members To Save Up In Case Of A Strike By WGA, SAG-AFTRA or DGA
Lisa Loring Dead – Original Wednesday Addams Actress Passes Away at 64