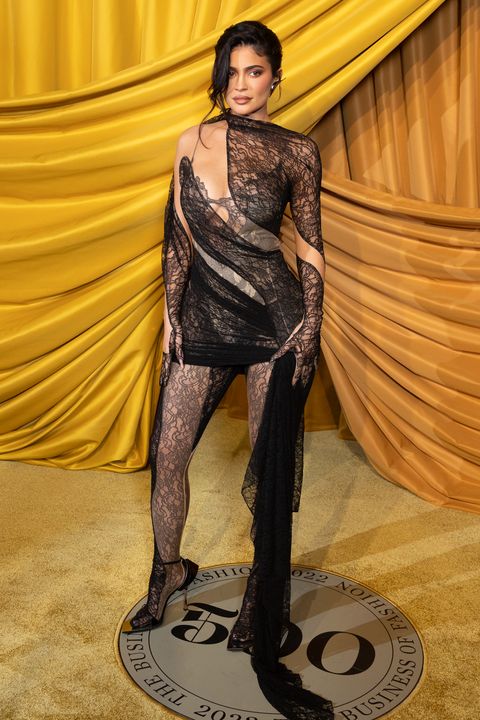 Kylie Jenner continues to stun with her ensemble choices at Paris Fashion Week, this time at the Business of Fashion gala dinner on Saturday night celebrating the BoF 500 from 2022. Jenner chose a form-fitting cutout gown made from sheer panels and black lace pieces, revealing her matching lacy bra. The fabric of the skirt wrapped in a somewhat thicker layer around her waist before trailing to the ground in a long train.

The gown’s sleeves formed into semi-transparent gloves over the beauty mogul’s hands, and she wore a tall pair of stiletto heels in black.

Jenner had her hair swept up in a bun with loose curling tendrils around her face. She wore a pinkish-brown matte lipstick and a bronze makeup palette, then accessorized with a small ruched handbag and a pair of silver stud earrings. 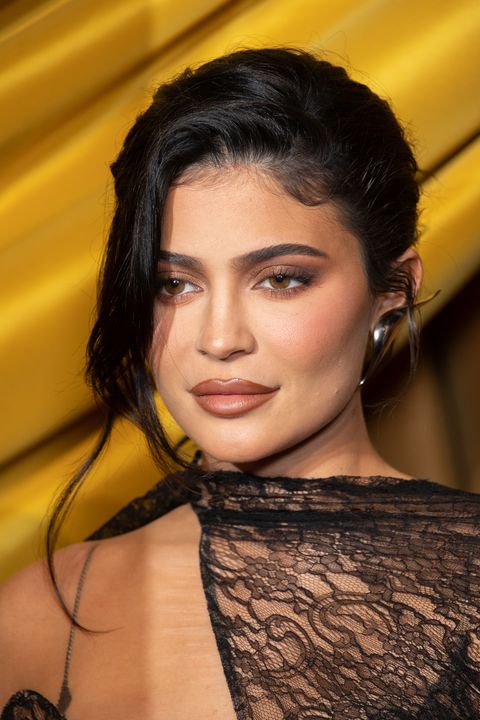 For the Balenciaga show this week, Jenner wasn’t satisfied with just one outfit. The Kardashian‘s star arrived at the event in an off-the-shoulder dress in cream paired with bright blue high-heeled boots. But when she was photographed leaving the event, she’d changed into a green smock over a black bodysuit with matching full-length black gloves.

Later, she shared a photo of herself in a Paris hotel room wearing a full-length hot pink dress made of fuzzy textured material with long sleeves and padded shoulders, as well as a pair of intricately framed white sunglass that she tagged with Balenciaga’s name.

The reality star shares two child with her boyfriend Travis Scott, their four-year-old daughter Stormi, and a seven-month-old son who they originally announced was named “Wolf,” though they have since said they’re renaming him without revealing the new moniker.

In recent confessional on The Kardashians, Kylie said of having another child, “I feel like with my second one, you just anticipate everything and you know what’s going to happen and you’ve done it before, so I feel like I was a lot more present this time.”