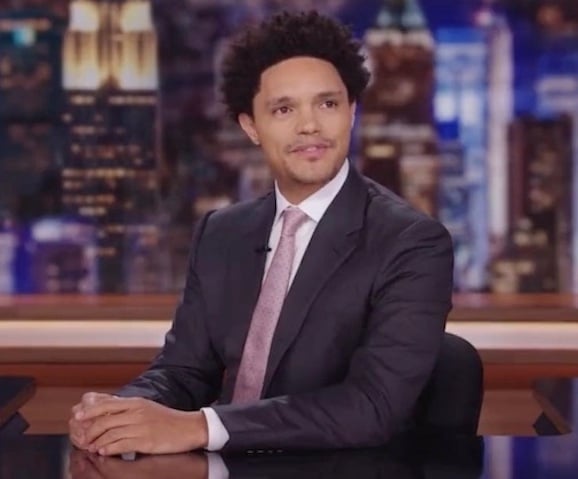 It’s the end of another era at The Daily Show.

On Thursday night, the comedian shocked viewers by announcing that he’ll soon be leaving his role as host.

Noah broke the news during the latest episode’s taping, reflecting at the time on his seven-year anniversary with the talk show.

“One of the overriding feelings I found myself experiencing… was a feeling of gratitude,” he said to open a five-minute speech.

“There are so many people who make this thing come together, and I want to say thank you to the audience for an amazing seven years. It’s been wild.

“I remember when we first started, so many people didn’t believe in us. It was a crazy bet to make. I still think it was a crazy choice…

“What a journey it’s been.”

Noah started his run with The Daily Show after working as an on-air correspondent for the program in 2014.

He took over for former host John Stewart less than a year later.

“It’s something that I never expected, and I found myself thinking throughout the time, everything we’ve gone through — the Trump presidency, the pandemic, just the journey, the more pandemic,” said Noah on Thursday .

“And I realized that after these seven years, my time is up. But in the most beautiful way, honestly.”

“I’ve loved trying to figure out how to make people laugh even when the stories are particularly s—– on the worst days. We’ve laughed together, we’ve cried together.

“But after seven years, I feel like it’s time.”

The South Africa native concluded his speech by promising he wasn’t “disappearing.”

He also admitted he misses “learning other languages” and “going to other countries and putting on shows” — before thanking the audience one final time for their loyalty over the years.

The Daily Show premiered in 1996 with Craig Kilborn as host. Jon Stewart took over from 1999 to 2015 and then he handed the reigns to Noah.

We should note that it’s unclear exactly when Noah will leave the post.

“We are grateful to Trevor for our amazing partnership over the past seven years.

“With no timetable for his departure, we’re working together on next steps,” Comedy Central said in a statement on September 29.

“As we look ahead, we’re excited for the next chapter in the 25+ year history of The Daily Show as it continues to redefine culture through sharp and hilarious social commentary, helping audiences make sense of the world around them.”