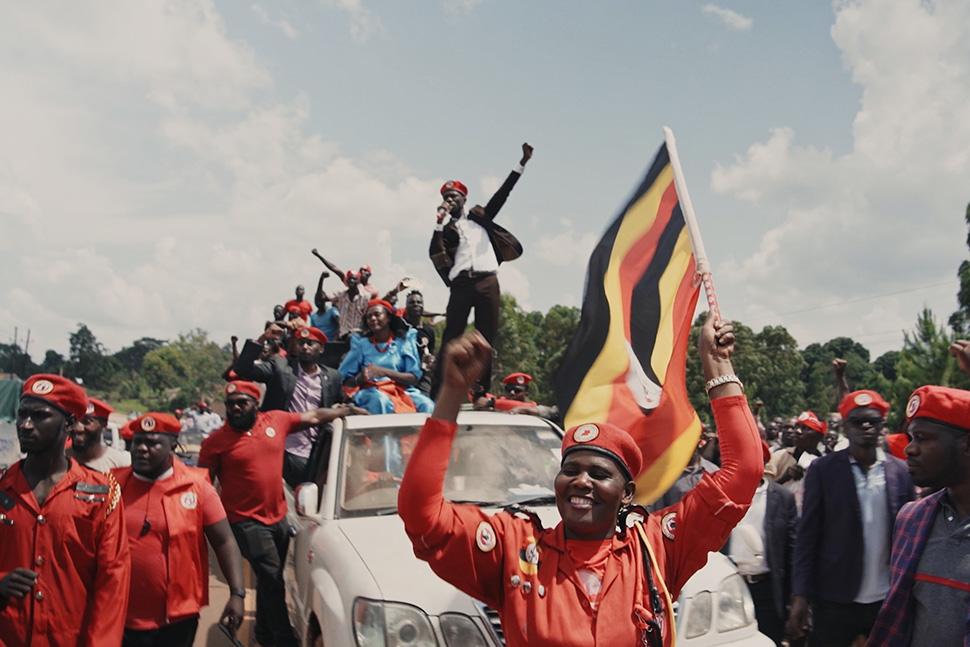 One of the most stirring moments in Christopher Sharp and Moses Bwayo’s documentary Bobi Wine: Ghetto President — a film full of stirring moments — is the sight of Bobi Wine on the back of a truck, spearing through the back-blocks of Uganda with a copy of the country’s constitution held aloft. As a new Member of Parliament, he believes in that document. People all over the country, he insists, believe in that document. Through imprisonment and torture, he holds fast to the belief that if Uganda only followed its own rules — as set out clearly in this very constitution, which both he and President Museveni promised at different times to uphold — the country would be saved.

Bobi Wine (real name Robert Kyagulanyi Ssentamu) grew up in a Kampala slum. In this Venice Film Festival out of competition title, we see him go back there as a pop star and a politician, at ease among the tin sheds and sewage ditches, encouraging kids to sing with him. How he survived as a child remains a mystery. He had no family. As a teenager he lived alone, paying his own school fees with money earned from rapping. By the time he went to university Bobi Wine was a big star, although his wife Barbie says it was a long time before she realized he and her fellow student Robert Kyagulanyi were the same person.

Bobi and Barbie came from different sides of the tracks; she remembers that one of the things that intrigued her about him was that he smelled different. Twenty years later, they move like a single unit. Both are fiercely committed and formidably articulate. When he is seized on some nonsensical pretext and sent to prison, she deals with the foreign press, guards their four children and gets organized. When he emerges, tortured and crumpled, they’re back to work. “The more you cry, the more your people continue to die,” he declares in one song. Neither of them has time for crying.

Bobi first ran for Parliament in 2017. “I always thought someone should speak for us,” he says. “And people thought I had the loudest voice.” At that point, Museveni had ruled the country for 40 years, imprisoning or killing off any opponents who seemed to be making headway. Funny, Bobi muses later, that the ruthlessly self-seeking Museveni was once his “favorite revolutionary,” the leader who defeated Idi Amin and made schools free. “I’d like a frank discussion with him. Mr President, what happened to you?” It could happen to him too, he admits. That’s why rules that put power in the hands of the people are so important.

One great strength of this documentary is that it spans so many years; Bwayo’s camera seems to have become embedded in Bobi Wine’s everyday life from the moment he engages with politics, ready for the moment in 2019 when he decides to stand as president two years later, then to follow the campaign. Of course, there are surely things it doesn’t show. He is never seen to be anything less than a heroic figure, unblemished by human failings or misdeeds; this is a film about the struggle, not a warts-and-all picture of the man behind the mission.

That said, no door is closed. We go out on the hustings with his traveling musical roadshow; we are at ease in their palatial colonial home, seeing Bobi and Barbie read with their children; we are flies on the wall when the Kyagulanyi team’s electoral office has been raided and ravaged by the police, sharing their exhaustion. Fear is constant. Police pursue his entourage on the campaign trail; at one point, their hotel is surrounded. Bobi must get out, says his entourage. Why? he demands. “What will they do with me, once they have arrested me?” Almost everything, as it turns out.

Yet the mood is largely upbeat, lifted by the frisky beats of Bobi Wine’s mix of rap and syncopated African rhythms. A highlight is watching him record a song advising how listeners should protect themselves against Covid, Wash your hands! Wear a mask! It is both a moving act of social responsibility and the year’s best novelty song. Life is full of festivities; the first thing Bobi and Barbie do when he is released from prison is throw a party. And they never relinquish hope. They can’t. Having chosen the struggle, they are in it for life.

Brad Pitt Reveals Who He Thinks Are ‘The Most Handsome Men In The World’
International Insider: Queen Elizabeth Laid To Rest; TF1 & M6 Union Collapses; Spiky In San Sebastian
‘Love is Blind’ Stars Kyle Abrams & Deepti Vempati Split Days After Confirming Romance
When is Coronation Street back on? Here’s everything you need to know
Greyson Chance says Ellen DeGeneres ‘abandoned’ him, calls her ‘manipulative’ and ‘opportunistic’