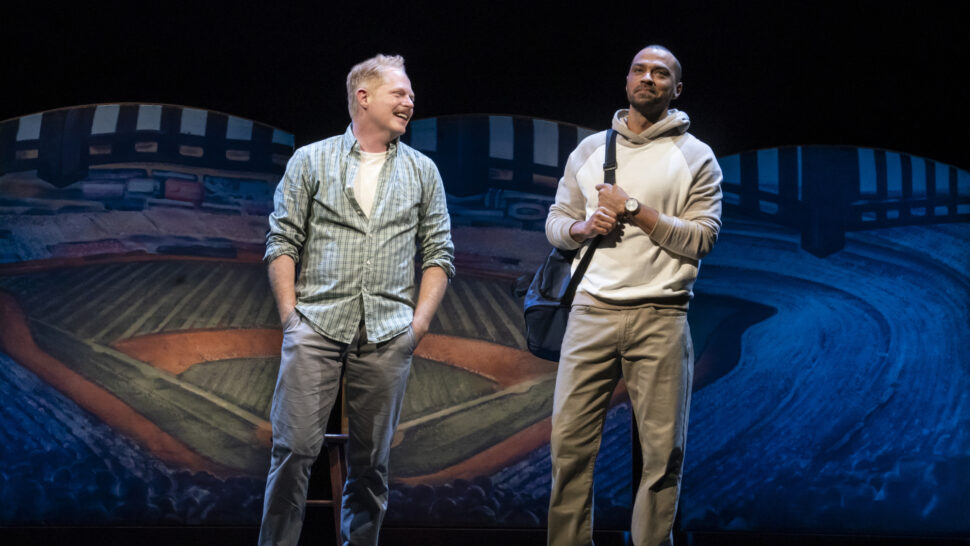 Tony winner Jesse Tyler Ferguson and nominee Jesse Williams are suiting up again as stars of the baseball-themed Take Me Out, which is set to return to Broadway in the fall. The hit revival will re-take the field October 27 at the Schoenfeld Theatre for 14 weeks, it was revealed today.

Written by Richard Greenberg and directed by Scott Ellis, Take Me Out bowed in the spring and went on to glove Tony Awards for Best Revival of a Play and Best Featured Actor for Ferguson. The show won widespread critical acclaim — and some unwanted headlines when an audience member recorded and posted on social media some nude scenes.

Here is the show’s stat line: When Darren Lemming (Williams), the star center fielder for the Empires, comes out of the closet, the reception off the field reveals a barrage of long-held unspoken prejudices dealing with sexuality and masculinity, money and power, and race and class. Facing some hostile teammates and fraught friendships, Darren is forced to contend with the challenges of being a gay person of color within the confines of a classic American institution. As the Empires struggle to rally toward a championship season, the players and their fans begin to question tradition, their loyalties, and the price of victory.

The rest of the cast is TBA.

Jesse Tyler Ferguson Reflects On Baseball, Broadway, ‘Take Me Out’ And The Photos That Marked A Most Unusual Season – Deadline Tony Watch Q&A

“Second Stage’s Tony Award-winning production was one of the most buzzed-about plays of the spring season, and its limited run was too brief to capture the interest and demand for tickets,” producer Barry Weissler said in a statement.

The creative team for Take Me Out includes scenic design by David Rockwell, costume design by Linda Cho, lighting design by Kenneth Posner, sound design by Bray Poor and casting by Jim Carnahan.