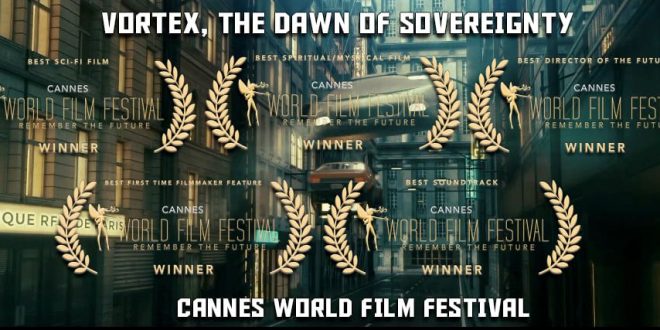 Synopsis:
It’s 2047. Every human being is identified and traced by large surveillance and censorship networks. A few freethinkers have created an encrypted network of alternative research and informatio, making it harder for law enforcement to track down. Among them, a teenage girl, Serena, is secretly developing glasses to reveal vortices: doorways to other dimensions.

“I am proud of the universe I have created. The costumes, the characters, the special effects, the music. It is this alchemy between the Sci-Fi universe, Steampunk and Cyberpunk that makes this film have a personality, a particular universe. All this mixed with philosophical dialogues, I do not know of any other comparable film. I worked every shot frame by frame and honestly, there isn’t a single minute in this movie where there aren’t any special effects. I wanted to make each frame fit into this particular universe and when I see the rendering with this grading that is both dark and very colorful, I think this film has a soul, a personality. I wanted to create a unique concept both in substance and in form.” – Michel Rousseau

Navid Sole from The Apprentice wants to ‘find love and ‘lose virginity’ after being kicked off
Kanye West Hints He Wants To Collaborate With Nike’s Air Jordan With Cryptic Post
Disney ‘takes a different approach’ to Snow White remake after Peter Dinklage’s dwarfism comments
New skincare brands that are worth the hype (and your money)
Duggar Family Documentary to Expose the Rotten Heart of IBLP: Here’s What We Know