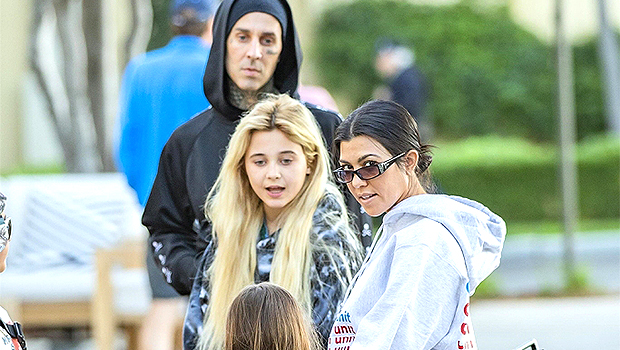 When Travis Barker and Kourtney Kardashian tie the knot, the whole family will be there! HL has EXCLUSIVELY learned that their kids are acting like a ‘blended family’ and will be part of their wedding.

One can expect a lot of punk rock to be played at Kourtney Kardashian and Travis Barker‘s wedding reception. The two dressed up as Sid & Nancy for Halloween, and Kourt, 42, has shown she’s a fan of The Misfits, but perhaps her new favorite song is “We’re A Happy Family” by The Ramones? After all, Travis, 46, and Kourt’s kids have become the best of friends since the blink-182 drummer and Keeping Up with the Kardashians alum started dating. The couple is even planning to have them involved in their upcoming nuptials. “All of Kourtney’s children and both of Travis’s are going to be included in their wedding party,” a source close to the Kardashians tells HollywoodLife, “as this is what they both want.”

“Kourtney and Travis are digging their blended family,” the insider tells HollywoodLife. “Kourtney has developed a bond with Travis’s kids and is starting to treat them like her own.” This love goes both ways, as the source says that Travis’s son, Landon Barker, 18, has “become a role model to Kourtney’s boys,” Mason Disick, 11, and Reign Disick, 6. Travis’s daughter, Alabama Barker, 15, has “already become a big sister figure to Penelope [Disick],” the insider adds.

Travis’s stepdaughter, Atiana de la Hoya, has also become close to Kourtney. She has been included in family vacations, and on Nov. 28, Alabama posted a few photos of her, Kourtney, and Atiana matching in black, puffy jackets. Travis shares Alabama and Landon with ex-wife Shanna Moakler. While he and Shanna were married, Travis bonded with Atiana, Shanna’s daughter from a past relationship with Oscar De La Hoya.

“Kourtney has known Travis’s kids for years because they all grew up in the same neighborhood,” a KarJenner source tells HollywoodLife EXCLUSIVELY. “So, it really wasn’t their relationship which brought Kourtney and his kids closer. It’s the fact that it gradually happened over time, which makes it all that more authentic and organic. As everybody knows, Kourtney is an incredible mother, and she’s so good with children. They always come first in her eyes. Kourtney really didn’t have to try to build a bond with Alabama and Landon. The connection was mutual. She loves them like her own. “

While Kourt and Travis’s kids have bonded, the same can’t be said about her and Travis’s ex. Shanna, 46, has been shady towards Travis and Kourt’s relationship, and so, Travis and Kourt have instituted some rules to keep the peace. “They do not talk about Shanna at all, and neither of them wants to. Kourtney is not the type of person to bad mouth Shanna in front of her children,” the insider says. “Travis has made up a rule for the kids, which is that they are not allowed to discuss anything that goes on between their father and Kourtney with Shanna. They have agreed to this.”