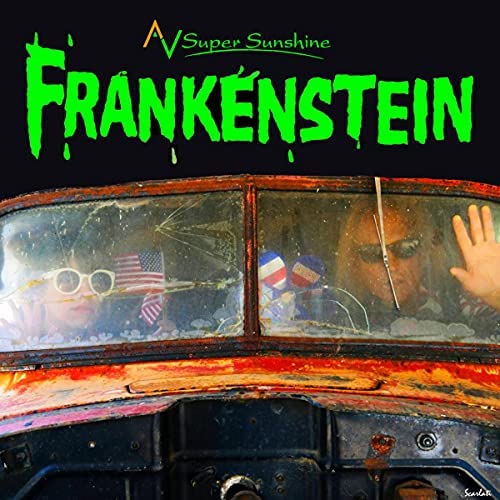 AV Super Sunshine’s new single “Frankenstein” doesn’t mention Lady Gaga, but it’s an affectionate tribute to one of AV’s biggest influences. The artists long ago connected via social media where they shared music and commiserated by the vagaries of the music industry. Gaga’s music and relationship with her fans exerts a strong hold over AV Super Sunshine’s imagination and continues to do so, but no one will ever claim he’s imitative.

He has had his own style since debuting and time has only further refined it. The new single is cast in a rock vein, but there are inklings of other sounds gnawing along the song’s edges. It has a thoroughly modern tempo and production values fueling the song while still referencing the familiar; Michael Bradford’s frequently staccato rhythm guitar peppered with jagged exclamation points along the way and the keyboard work pulls listeners into recognized territory.

The video released alongside “Frankenstein” is equal parts a fun and surrealistic romp. There is something almost silent movie-ish about the “acting” of the video’s three principles. You see it in their faces, motions, and juxtaposing it with a smattering of music video’s time-tested tropes makes for a tasty blend.  It’s one more indication among many of what separates AV Super Sunshine from other peers and contemporaries.

The surrealism comes from the vivid use of color, unusual imagery, and unexpected turns. We see AV Super Sunshine playing bass unmasked in early clips, but he’s soon wearing a Frankenstein mask in others and toy cars make inexplicable cameos. It will strike few viewers, however, as meaningless fluff. Existing fans will see it as well in keeping with AV Super Sunshine’s musical vision while people encountering his work for the first time will likely experience a charge watching his vision unfold.

The guitar sound could be a little fatter. Bradford, nonetheless, lays in his parts in the right places. It weaves around recurring keyboard contributions and the cumulative effect is spartan, yet muscular. AV Super Sunshine has released a string of superlative singles brimming with musical imagination – they all share the same confident pacing and contagious self-assurance. “Frankenstein” has a constant push without ever rushing the song towards its conclusion.

Its lyrics are direct and shaped to the music. AV Super Sunshine approaches the words for his songs with many of the same goals he has for his music. There isn’t any wasted motion, no extraneous words. This is one of 2021’s best singles and another musical feather in his cap. Working with his core creative tandem of Michael Bradford and partner Philomena Victor has paid off in a big way for AV Super Sunshine time after time; he’s found sympathetic collaborators who elevate his talents.

Let’s hope they continue working together indefinitely as their creative potential shows no signs of fading out. His profile continues expanding with each new release and “Frankenstein” should position him for making significant progress into the future. He’s putting his best creative foot forward once again with this single.