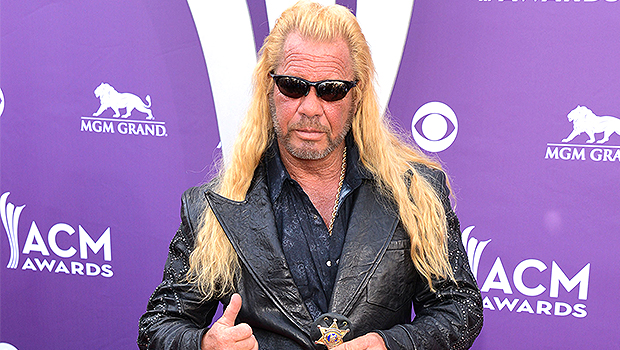 Dog the Bounty Hunter got married to Francie Frane on Sept. 2, and romantic photos from the couple’s Colorado ceremony have finally been released!

Duane “Dog The Bounty Hunter” Chapman, 68, and Francie Frane made for such a beautiful couple at their wedding ceremony in Colorado on Sept. 2. Over two weeks after the nuptials took place, the first photos from Duane and Francie’s special day were released by the Daily Mail on Tuesday, Sept. 21. The wedding was reportedly held at the Pinery At The Hill, a luxury resort in Colorado Springs, with roughly 100 of the couple’s close friends and family members in attendance. And as the pictures proved, the lovebirds absolutely stunning as they said “I do!” SEE THE PHOTOS HERE.

For his sixth wedding, Duane looked dapper in a black tuxedo. Meanwhile, his bride stunned in a billowing white dress and crystal sneakers. At one point during the reception, Duane and Francie happily posed to cut their cake, which was three tiers and looked absolutely delicious!

Specific details about Duane’s wedding day also came out from Daily Mail‘s report. To keep both Francie and the guests safe, Duane reportedly increased security with German Shepherds and Navy SEALs. Of Duane’s ten children, only three were in attendance: sons Garry, 20, James Robert, 39, and Wesley, 40. The three boys walked their dad down the aisle, per Daily Mail, and then Duane and Francie exchanged their own vows before becoming husband and wife. “Francie, I give you my word, I will love you every day until I die,” Duane reportedly said in his vows, while Francie reportedly told the bounty hunter, “I will walk alongside you to the ends of the earth and back and be your loyal wife, your best friend and your biggest fan.”

Duane’s nuptials made headlines even before they took place, and that was because his daughters Cecily and Bonnie Chapman claimed that they weren’t invited to the wedding. “I think he’s just scared that we remind him too much of my mother,” Cecily, 28, told TMZ on Aug. 23, referring to her mom Beth, who tragically died of cancer in 2019.

Duane and Francie got engaged in May 2020, roughly ten months after Beth passed away. Following Beth’s death, Duane found solace with Francie, who had also experienced the loss of her husband. In an exclusive interview with HollywoodLife, Duane’s daughter, Lyssa, said that the couple still mourn the loss of their loved ones while moving forward in their life together. “I’ve been in the room when they both cry over their spouses,” she said. “It’s kind of awkward. They’re really good for each other. And my dad’s in a really good place and I wish we could all be in this good place together as a family.”