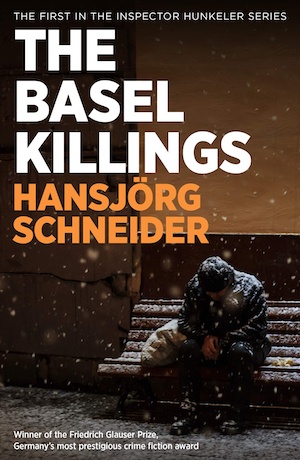 Translated by Mike Mitchell — Basel is an icy city during the winter, situated in a corner of Switzerland just spitting distance from both France and Germany. It’s a different Switzerland to the ski slopes, Swiss watches and secretive banks; Basel is a snowbound city with a conservative populace, who view recent immigrants from the Balkans with distrust at best.

The Basel Killings features Basel Criminal Investigation Division Inspector Peter Hunkeler. Not your average crime fiction hero, Hunkeler is an ageing man struggling with the discomfort of an enlarged prostate, out bar hopping on a cold October night, a night which might as well be in December. Hunkeler steps out of a seedy bar and discovers he can’t make it to his apartment to pee. On the way home he spots a drunk, a man he knows well from the bars he frequents, and stumbles over to talk to him. Hunkeler moans about Basel, about his love life and about work, before realising that Hardy isn’t replying. The old drunk isn’t replying because he’s dead – strangled to death and then with his ear sliced off, taking his diamond earring with it. The sight is enough to make Hunkeler vomit, an unwelcome contamination of the crime scene.

Despite Basel being a town of 175,000, Hunkeler seems to know everyone, and knows everything about the darkest and seediest part of town. The billiard hall nearby is a popular drinking place for Albanians, and the other officers on the scene are quick to pin the crime on them. “If it was one of them,” one of Hunkeler’s subordinates mutters early on, “he’ll have been across the border long since.” That explanation is a bit too simple for Hunkeler, who despite being shifted from the case because of his involvement with the victim continues to dig into what really happened. Hunkeler sees a link between this and another murder, the body of a woman discovered strangled in a rural area outside of Basel, with her ear sliced off and a diamond stud removed.

Hunkeler’s politics feature heavily in The Basel Killings, with his cynical take on Swiss life colouring every conversation he has with his colleagues, his girlfriend and even the dead man in the opening scene. These left-of-centre views are a reaction to those around him, who are quick to blame society’s ills on immigrants and outsiders. Schneider was known as a philosopher and a playwright for over 20 years in his home country before turning his hand to crime fiction, and as a result brings with him a deep understanding of humanity. By presenting both sides, Schneider makes his own opinions obvious but doesn’t give any easy answers. The Balkan conflict was still fresh in the memory when Schneider wrote The Basel Killings in 2004, and immigration from the former Yugoslavia and the way it was shaping life throughout Europe are key drivers of the tension at the heart of The Basel Killings.

The drunk detective with his best years long behind him is well-trodden ground in the world of crime fiction, but The Basel Killings manages to inject a little bit of fresh life into this trope. Hunkeler’s drunkenness is unapologetic, and is presented in a matter-of-fact, unsympathetic manner. Hunkeler is like an ageing Maigret with the politics of Martin Beck, and fans of both series will enjoy this book. The plotting and pacing mirrors the cold, wet, foggy weather of Basel. This is atmospheric crime at its best, and everything about The Basel Killings is done right – the length is just right, the mood dark, the translation dotted unobtrusively with smatterings of foreign words, fitting for a city jammed into a small corner bordering France and Germany, and fitting for an author known for his use of Swiss dialect.

The Basel Killings in translation is billed as the first in the Inspector Hunkeler series, however it was in fact the fifth published in German. The original title was Hunkeler macht Sachen, which means ‘Hunkeler does things’. I for one am glad the title was changed, but wonder if the change of title leaves room for more of the series to be translated. I want more of Hunkeler’s back story, I want to know what led to Hunkeler being where he is today. That’s my one criticism of The Basel Killings, that it left me wanting more. With ten books in the series in German, published between 1993 and 2020, hopefully we’ll see more of Inspector Hunkeler in years to come.

For more on European migration in crime fiction see The Greek Wall or This Land is No Stranger. You can also cross the Balkans in Dan Fesperman’s Lie in the Dark.