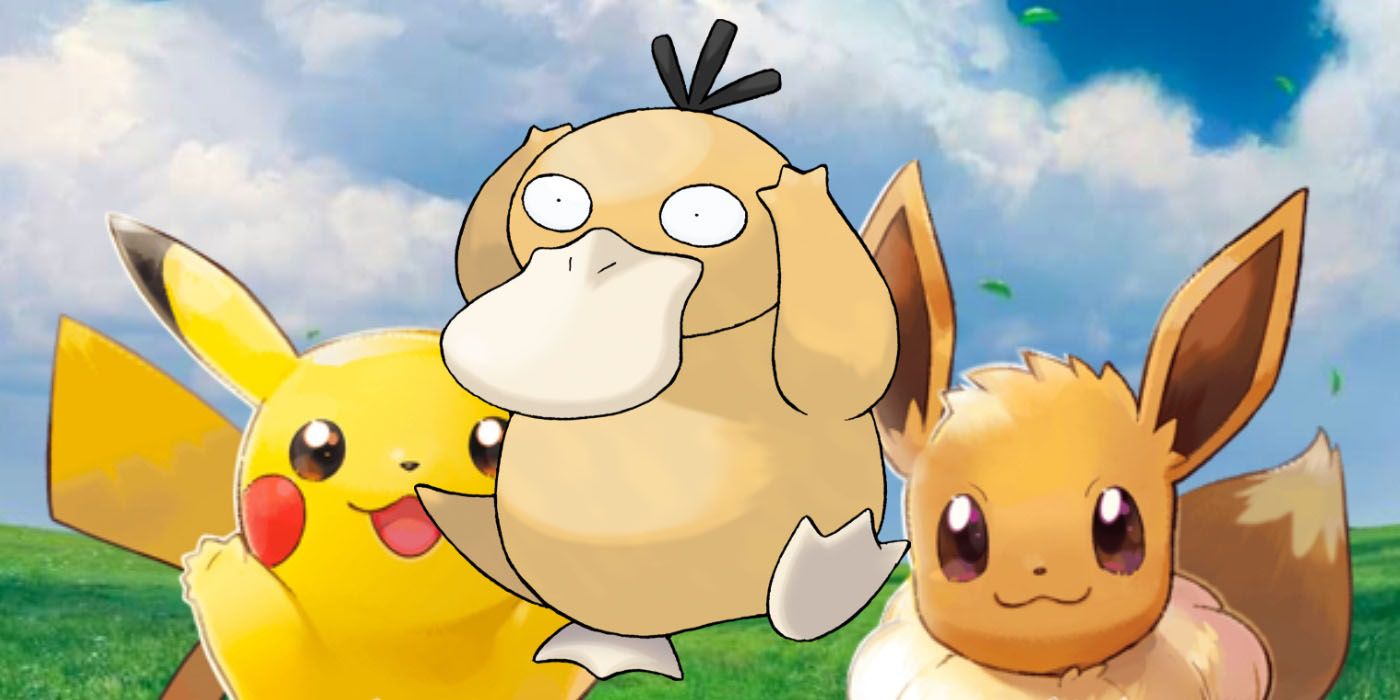 Psyduck almost got its own game, as it was originally going to be the mascot of one of the Pokémon: Let’s Go titles. Before a Pokémon: Let’s Go, Psyduck! could get off the ground, Psyduck was replaced with Eevee as Pikachu’s counterpart.

The Pokémon: Let’s Go games are remakes of Pokémon Yellow, with a gameplay shift that puts them closer to Pokémon GO. Pikachu was the mascot of Pokémon Yellow and is the face of the entire Pokémon franchise, so it’s a no-brainer choice for one of the two Let’s Go game mascots. The decision to use Eevee as the other cover mascot also makes sense, as the rival in Pokémon Yellow used an Eevee as his starter. Eevee is also a popular Pokémon in its own right, and it has remained relevant over the years via new Eeveelutions, a unique Z-move, and even a Gigantamax form.

Eevee wasn’t always the first choice to front a Let’s Go game, however, as there was a time when Psyduck was considered to face off against Pikachu. Psyduck was one of Misty’s Pokémon in the original series of the anime, and it quickly earned a fanbase for its dopey manner and occasional overwhelming blasts of psychic energy. Psyduck has appeared as recently as the Sun and Moon anime, returning alongside Ash’s old companions. Many fans love Psyduck, so why wasn’t it used for the Let’s Go games?

According to The Verge, Pokémon: Let’s Go director Junichi Masuda is a big fan of Psyduck and wanted to use it for the Let’s Go games. Since Pysduck shares the same color scheme as Pikachu, the two would have looked similar on box art and in promotional material, so Eevee was chosen instead. All of the Pokémon that have ever appeared on game box art have looked distinct, often with directly opposing colors (red and green, black and white, etc.) that make the games look different to the casual observer. The Let’s Go game boxes prominently feature their mascots against a grassy field, so it would have been hard to distinguish them from afar if they were both yellow.

Masuda told The Verge Eevee was, in part, chosen over other Gen 1 Pokémon due to the sheer amount of fanart created for it over the years. It demonstrated that Eevee is clearly an incredibly popular Pokémon, thanks to its cute design. Eevee also had the benefit of being a different color from Pikachu, and it has the rival connection from Pokémon Yellow, so it made sense for it to be chosen over Psyduck. Perhaps if Psyduck’s blue Shiny version was its default design, the world might have received a Pokémon: Let’s Go, Psyduck! game.

Next: Why Pokémon Teasing Let’s Go Diamond & Pearl Remakes Is A Mistake

Scott has been writing for Screen Rant since 2016 and regularly contributes to The Gamer. He has previously written articles and video scripts for websites like Cracked, Dorkly, Topless Robot, and TopTenz.
A graduate of Edge Hill University in the UK, Scott started out as a film student before moving into journalism. It turned out that wasting a childhood playing video games, reading comic books, and watching movies could be used for finding employment, regardless of what any career advisor might tell you. Scott specializes in gaming and has loved the medium since the early ‘90s when his first console was a ZX Spectrum that used to take 40 minutes to load a game from a tape cassette player to a black and white TV set. Scott now writes game reviews for Screen Rant and The Gamer, as well as news reports, opinion pieces, and game guides. He can be contacted on LinkedIn.