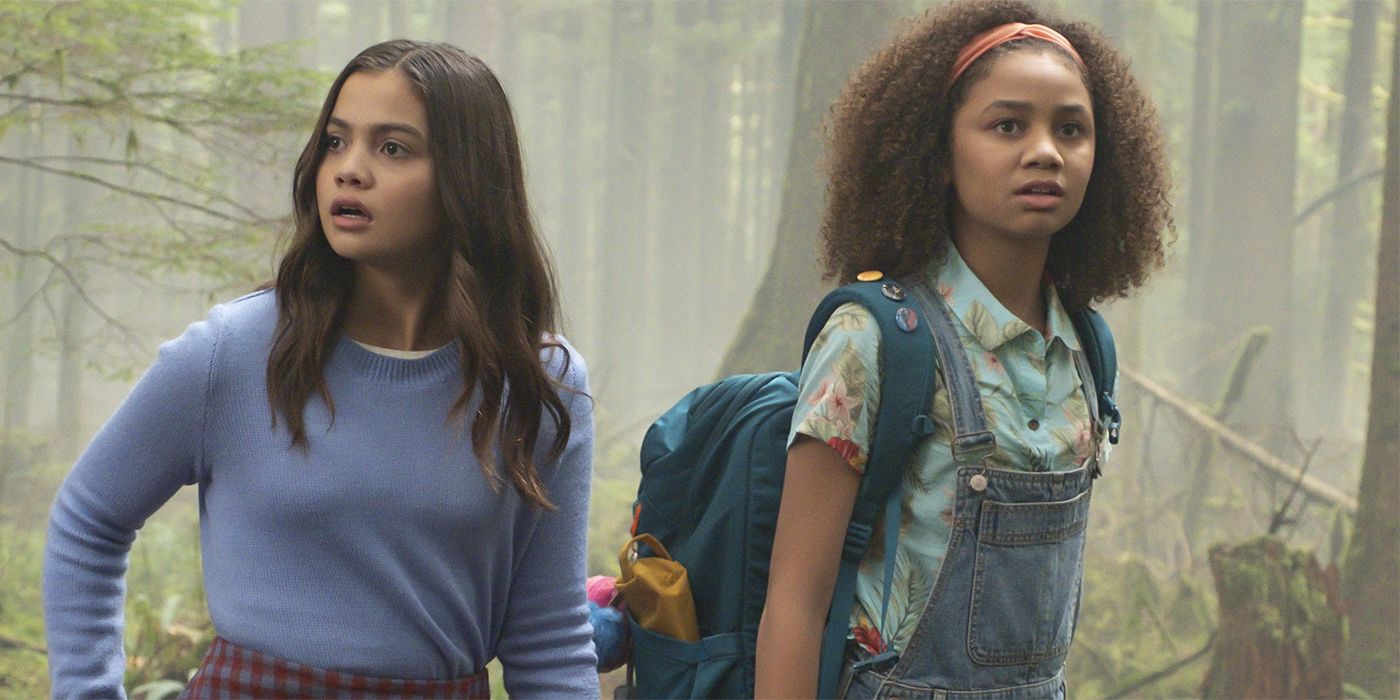 Disney Channel Original Movies have been a family staple since Tiger Town first premiered, and 2020 isn’t breaking with tradition despite the current chaotic state of the world. After giving the musical crowd a treat in Zombies 2, the House of Magic is now bringing in the fantasy crowd with Upside-Down Magic.

Starring newcomer Izabela Rose as the plucky misfit Nory and Siena Agudong (Netflix’s No Good Nick) as her put-together best friend Reina. The two young girls arrive at Sage Academy ready to strengthen their friendship and their love of magic, but soon find both tested by the school’s unfair classification system and rigorous training program. Based on a Scholastic book series by the same name, the film explores relevant themes like equality and loyalty.

The bright stars of Upside-Down Magic spoke with Screen Rant about their anticipation for the film, sharing stories from their original screen test as well as what their characters’ journeys mean to them.

I heard that you two had a chemistry read together before you were cast, right at the start of testing. Can you talk about that experience and your first impressions of each other?

Izabela Rose: Yes, of course. I remember I – and I think also Siena – went a couple rounds for each of our roles, and finally we made it up to the chemistry read. Actually we met on a previous show once, for a quick little second and then we met again, and I remember us just having a amazing connection off the get go. And I think we really brought that friendship that that we had naturally into the audition room, just like Nory and Reina had that friendship together.

We went in there a couple times together, I remember. And then finally, we went there last time and our amazing and talented director, [Joe Nussbaum], was like, “Have you guys ever been to Vancouver?” And me and Siena were like, No,” and then he was like, “Well, we’re going!” It was dreams come true; it was so amazing.

Siena Agudong: I loved it. I mean, it’s so special to book something in the room – and let alone like with Izabela at the same time. We got to experience it together. And it’s a bonding, because it’s just such a beautiful moment that we’re hoping for the duration of the audition period, so I was very happy.

Nory and Reina’s bond is the heart of the film, but you each have your own plots at Sage. Can you talk a little bit about Nory bonding with the UDM and Reina with the Flares?

Siena Agudong: I feel like both characters are trying to find their place. It’s definitely different being separated from each other. Reina is placed in the honors Flares class, and it’s very difficult for her because Professor Argon is very strict, and it’s just not the best working environment. It’s not the happiest either, and she doesn’t have somebody there for her, to support her, or where she can lean on a shoulder. So, she just feels very vulnerable there, and she feels constantly in a competition with the other students.

Izabela Rosa: Yes! After Nory faces rejection by Sage Academy, because her magic is different, and it’s wonky in Sage Academy’s terms, that leads her into the UDMs where kids with wonky or undeveloped magic go to. And that’s where she can meet all the UMDs, and I think really Nory does [get] all the UDMs to say, “Magic is magic. No matter if it’s different, magic is magic.”

I think Nory and the UDMs set out to prove to Sage Academy that even though their magic is different, that doesn’t mean that you make them outcasts. I think what I love about Nory and Reina’s friendship, and I think a lot of people would love, is that they’re so supportive. When Reina gets sucked into Sage Academy and Nory gets accepted into the UDMs they still make that time to kind of check up on each other and to be supportive friends.

The idea that everyone is unique in their own way and that’s good is the message of the film, which I love. But despite Sage probably not being the best learning environment when you ladies arrive, there are a lot of lessons to be learned in the film aside from that one. Is there anything else that either of you learned from your characters or took away from your storyline?

Siena Agudong: Absolutely, I really love the friendship there. And just showing the power of being there for each other and the power of communication and trust, really, and loyalty. Keeping up with one another, especially during these times – it kind of relates to quarantine as well. You need to keep up with each other and check in on how everybody is doing, because ultimately you don’t know when you’re separated. Talk to them genuinely, I think that’s such an important thing.

Izabela Rose: I think exactly how you said, I love the message with celebrating differences and accepting others, because I think that’s definitely important in the world we are in today. I think we find a little bit more problems with that situation, and I feel this movie will – I hope people that are maybe experiencing the same thing will take away from this movie that your differences what makes you special.

And I have to agree with Siena right there about true friendship, especially during the unfortunate times we are in right now during quarantine. There’s a lot of friendships that are apart during this time, and it’s exactly how Reina and Nory were experiencing the movie when Reina does get accepted and Nory doesn’t. Again, like I said, they do make that time to be supportive friends, and that’s what I love. I hope it does encourage other friendships that are maybe experiencing the same thing.

And of course, magic in this movie. I mean, I hope this movie does open people’s minds to endless possibilities.

Speaking of endless possibilities, without spoiling anything, I think the ending of Upside-Down Magic definitely leaves the door open for a sequel. Is there anything that you would like to see yourselves doing in a sequel? Any plots you’d like to give to the writers?

Izabela Rose: I’m in the same boat as everyone else. I don’t know. I have no idea, but I hope that people will love the first movie, and hopefully there will be a sequel.

Tatiana Hullender is a writer at Screen Rant, focusing on film and television, as well as a co-host of several podcasts. In the interviews she conducts for Screen Rant, she seeks to learn what drives each creative mind and how different experiences influence the same narrative. As a graduate of Columbia University in New York City, Tatiana studied theater and comparative literature. She has been passionate about all manner of storytelling since being exposed to Jane Austen and BBC adaptations of her work all at once. But Regency satire of manners isn’t the only genre she loves, as a love of comic books naturally developed into a love of cinematic universes and their superheroes. So long as a story has heart and humor, there’s a chance of finding something to enjoy in the telling of it.
Visit @myrcellasear on Twitter to follow Tatiana’s articles, interviews and podcasts including: The Flash Podcast, Pop A La Carte and Ladies With Gumption. Subscribe to them on the Podcast app, or contact her directly at tatiana(dot)hullender(at)gmail.com.