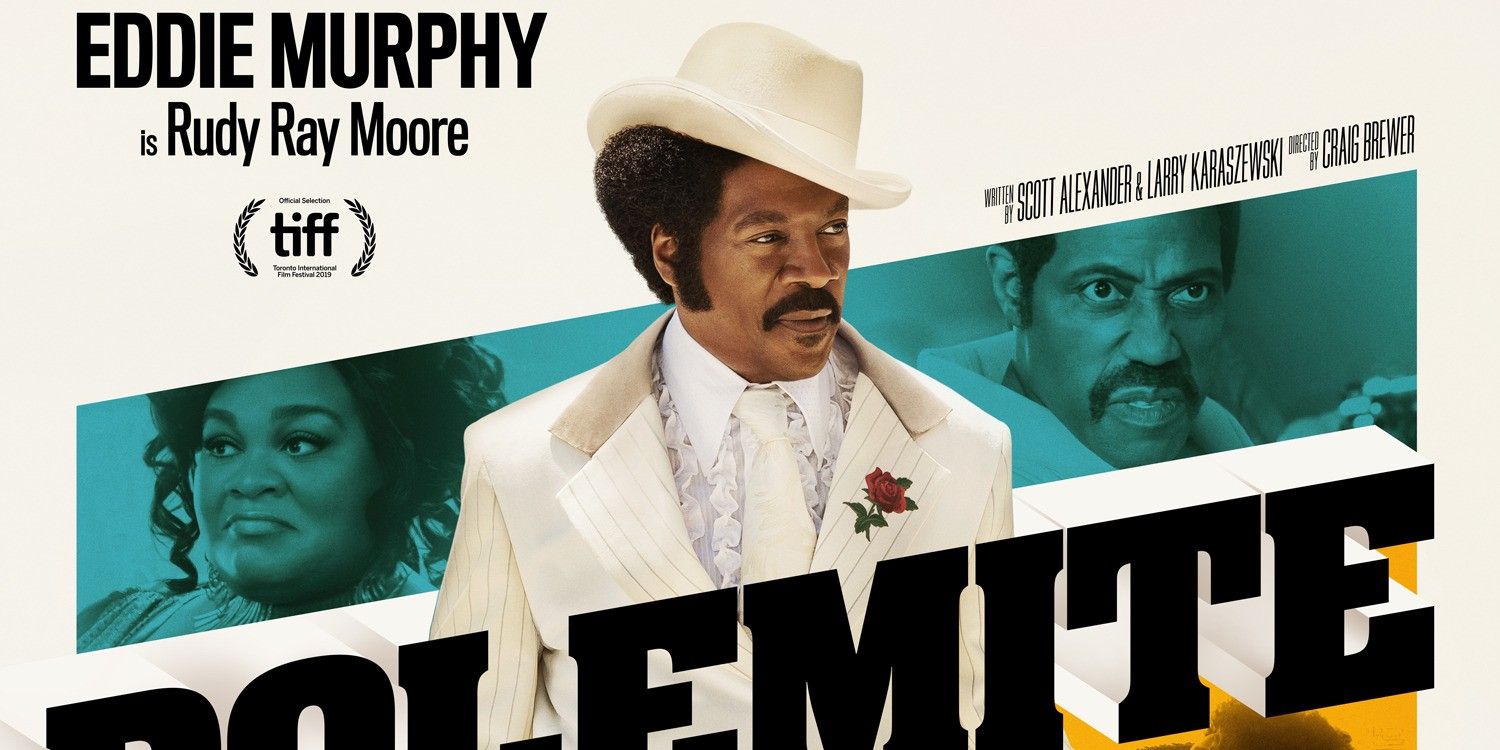 Dolemite Is My Name is a simple, yet affectionate ode to Moore that brings his story to life through an appealing blend of humor, heart, and music.

The tagline for Dolemite Is My Name is “Make your own legend”, and it’s an idea the film takes firmly to heart. Craig Brewer’s biographical comedy isn’t so much a hard-hitting look at the life of multi-hyphenate Rudy Ray Moore as a loving celebration of his determination to create his cult Blaxploitation movie Dolemite. It’s guilty of mythologizing Moore, but does so with real appreciation for him and his comically transgressive art. Eddie Murphy’s casting as Moore only adds a deeper layer of meaning to the whole thing. The comedy icon may even see something of himself in the man and his band of scrappy outsiders, and it feeds into what’s easily his best performance in a long while. Dolemite Is My Name is a simple, yet affectionate ode to Moore that brings his story to life through an appealing blend of humor, heart, and music.

When the film picks up in the 1970s, Moore is already in his forties and has recorded several comedy albums, yet finds himself working behind the counter at Dolphin’s Of Hollywood record store in Los Angeles, unable to realize his dreams of superstardom. Inspired by the obscene stories about a pimp named Dolemite spouted by a local homeless man named Rico (Ron Cephas Jones), Moore devises a successful standup routine based on the character and spins it off into multiple comedy-music albums that he sells to underprivileged black communities across the country. Not content to stop there, Moore is eventually inspired to turn Dolemite into a movie, with nothing but his sheer pluck and the aid of his friends to help make his dream a reality.

At its core, Dolemite Is My Name is a familiar tale about a wannabe famous filmmaker who assembles a ragtag group of people to work outside the system and realize their offbeat vision. It’s a story that writers Scott Alexander and Larry Karaszewski previously tackled in Tim Burton’s Ed Wood biopic, and one that Murphy and Steve Martin satirized with Frank Oz’s comedy Bowfinger twenty years ago. What sets Brewer’s movie apart is the way it immerses itself into the world of ’70s black culture and, of course, Moore himself. He might be cracking filthy sex jokes and cursing up a storm, but there’s a sincerity and passion to his material, and this carries over into Murphy’s great portrayal. And unlike Tommy Wiseau in The Disaster Artist, there’s nothing toxic about Moore or his actions in Dolemite Is My Name. It’s refreshing to watch a memoir about an idiosyncratic artist who doesn’t tear down the people supporting them in an effort to lift themselves up.

That sense of camaraderie extends to the film’s ensemble, who seem to be having a genuinely pleasant time together. As much as Dolemite Is My Name is a showcase for Murphy, Wesley Snipes nearly manages to steal the whole thing with his wide-eyed supporting turn as D’Urville Martin, the eccentric and conceited name actor who agrees to costar in Dolemite, on the condition that he gets to direct. It’s a welcome funny role for Snipes and the closest he’s come to matching his delightful performance from To Wong Foo. The talented supporting cast is equally strong, with actors like Keegan-Michael Key, Craig Robinson, Titus Burgess, and Mike Epps filling out Moore’s charismatic group of buddies-turned collaborators. Much of the joy in Brewer’s film comes from watching these characters – who know all too well there’s not a place for them in white Hollywood – interact and getting a feel for their kinship. That’s comes through all the more in Moore’s friendship-turned partnership with singer and actor Lady Reed (Da’Vine Joy Randolph), and there’s a sweetness to the way the pair bond and believe in one another.

Speaking of singing: music has always been at the core of Brewer’s filmography (Hustle & Flow, Black Snake Moan, the Footloose remake), and that remains the case here. Much like Moore used live jazz and R&B music during his Dolemite comedy albums, Brewer employs vintage tunes from the same genres (among others) to spice up the movie’s formulaic storytelling, to the point that Dolemite Is My Name begins to feel like a musical at times. But even more than its soundtrack, it’s the delightfully flamboyant ’70s fashion by Oscar-winning costume designer Ruth E. Carter (Black Panther) that imbues the movie with much of its flavor. Together, Brewer and his creative team pull viewers into the film’s period setting and make it feel like a real time in history, rather than a bunch of actors playing dress-up.

Produced as a Netflix Original, Dolemite Is My Name is much more than just additional content for the streaming service. It’s fitting even that a movie about a group of people working against an industry that has typically ignored their lives and culture should find its way to the big screen through less traditional means. The film has been positioned as a comeback vehicle for Murphy and, in many ways, it is. But as much as it fits the mold of an awards-baiting biopic about the making of a movie, Dolemite Is My Name is a reminder that these kinds of stories can still be enjoyable when they’re well-told and focus on those who still deserve more representation onscreen. And yes, for however long it lasts, it’s good to have Murphy the R-rated motormouth back once again.

Dolemite Is My Name starts playing in select U.S. theaters on Friday, October 4, and begins streaming on Netflix three weeks later on October 25. It is 118 minutes long and is rated R for pervasive language, crude sexual content, and graphic nudity.

Tags:
dolemite is my name