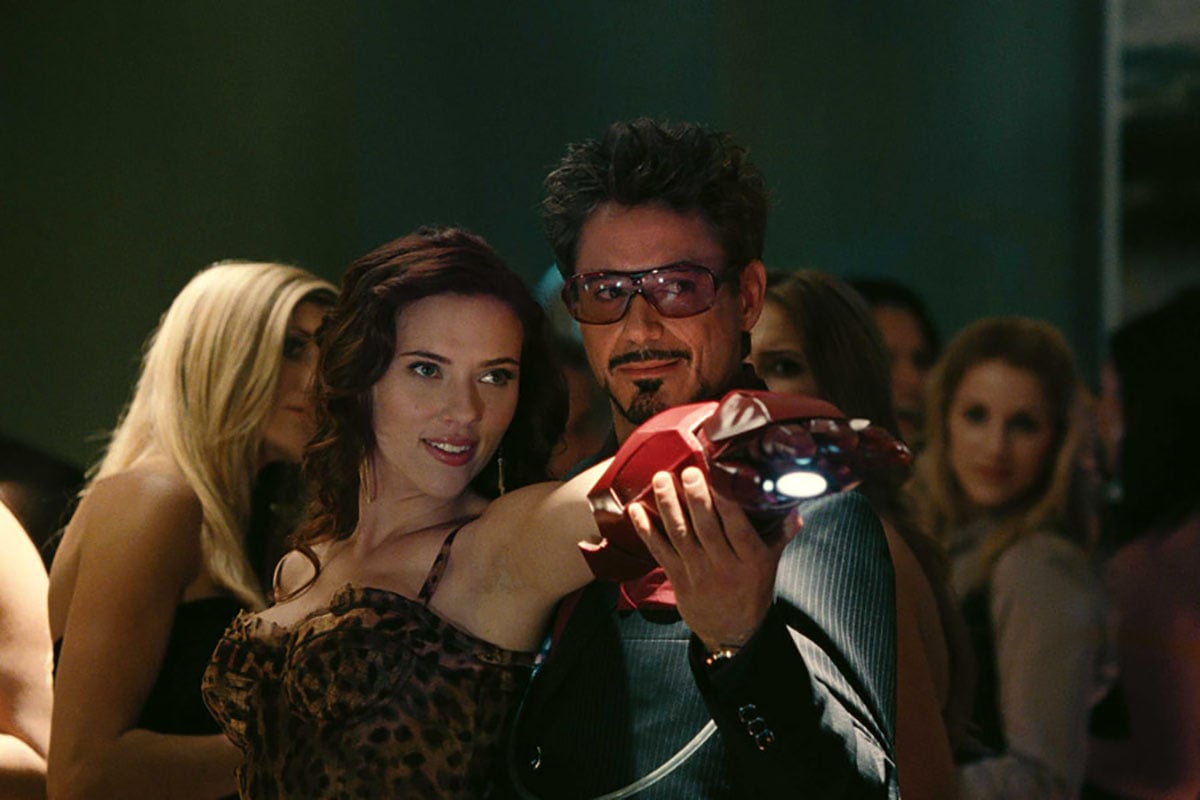 The most recent entry in the Marvel Cinematic Universe, Spider-Man: Far From Home, serves as an excellent epilogue to the Infinity Saga that started with Iron Man, all the way back in 2008. It honors the legacy of Tony Stark and sets up a new chapter in the Marvel Cinematic universe, while also nodding way back to the past when the villain’s true colors are revealed. Watching Far From Home made me nostalgic enough to re-watch Iron Man, which is and always will be a great movie. But that led me to Iron Man 2 and left me wondering if we should reevaluate this third, shaky step of the MCU.

While there’s a pretty solid consensus that Iron Man and Iron Man 3 are good or great (your mileage may vary, of course), critics and fans have a far less favorable opinion of Iron Man 2. I hadn’t watched the movie in a while, so revisiting it with it’s not-so-stellar rep in mind, I was curious how it held up and if almost a decade’s distance had softened it’s edges. The answer is…no.

Iron Man 2 doubled down on many of the things that made Iron Man great: taking on a comic book hero with a deft mix of seriousness and fun that’s now the model for Marvel films. And Iron Man 2 does have that balance of fun and gravitas that makes it an easy watch. It also continued the tradition of casting the best and brightest wherever they could. In Iron Man that meant stacking the deck with Oscar winners and nominees like Gwyneth Paltrow, Robert Downey Jr, and Jeff Bridges. Iron Man 2 added Don Cheadle (definite upgrade from Terrence Howard), Sam Rockwell and Micky Rourke to the cast in a hope of capturing that name prestige. With Jon Favreau back in the director’s chair, the actors were given free reign to improvise and talk over each other as much as they liked and just act up a storm. But what was cute in Iron Man gets really annoying here.

The constant bickering, muttering and general weirdness in many of the performances in Iron Man 2 goes from good to grating so fast. The endless banter is fine for establishing chemistry and realism, but it get so tiresome when it’s impossible for anyone to deliver a line like a normal human being with no one interrupting them. The squabbling and squawking  undermine what should be important emotional scenes, especially between Tony and Pepper, and just leaves the audience, or at least me, frustrated.

This doesn’t apply to everyone though: while Rockwell, Paltrow and Downey Jr. are all over the place, and Mickey Rourke is in an entirely different dimension, the agents of SHIELD are far more subdued and, I think easier to watch. Because Samuel L. Jackson and Clark Gregg seem to be acting in a more focused movie, their scenes and interactions with Tony keep the film from going entirely off the rails. Downey Jr., when he’s focused does gives a suitably excellent performance – subtly haunted as a man who’s convinced he’s about to die. It’s Tony’s own self-doubt and demons that are the real villain of the film, which works in some ways but also undermines Rourke’s already weird performance as Whiplash aka Ivan Vanko.

Most of Iron Man 2‘s stumbles are forgivable all these years later, and things like the special effects and action scenes really hold up well. Overall, it’s still a pretty fun movie to watch. But if anything, time has been harder on Iron Man 2 than other Marvel film if only for how icky it’s leering, empty introduction of Scarlett Johansson as Natasha Romanov, AKA Black Widow seems now. She’s introduced as a sex object and the camera and the male characters never stop treating her that way, even in her big fight scene. She’s a sultry action figure and neither the script nor Johansson’s dour performance do anything to elevate her above that.

Black Widow has always been a tough character to get right, because she’s never had her own narrative and her defining trait seems to be that she’s a committed cypher who’s good at killing and not much else. There’s not much to her in most of the Marvel films besides kicking ass and looking serious. Various writers have tried to give her more layers with varying and frustrating results. And I think the problems started with this introduction. She’s all flare and no character and her big turn is reduced to  her squeezing into a truly absurd cat suit. Why did you have to squeeze the woman who’s already in skintight back leather into a corset? Why did she take her hair down to fight the bad guys? Natasha has no real character here beyond her aesthetics and it handicapped her for years to come.

What Iron Man 2 did do successfully was lay the foundations for a larger universe. Agent Coulson and Nick Fury aren’t just there to streamline things, they’re around to hint at the much bigger world that Marvel will explore in years to come, and they do that very well – from Cap’s shield to the various hints about Thor, it’s satisfying and fun to see those clues dropped.

So, is Iron Man 2 a good movie? Well, it’s certainly in the bottom tier of Marvel films, along side it’s direct predecessor, The Incredible Hulk. It succeeds on some characters and fails others but it was good enough to get the Marvel Cinematic Universe where it needed to be – poised to blast into the stratosphere where it would stay.