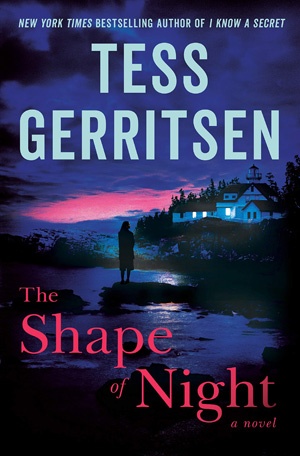 Written by Tess Gerritsen — She’s an author best known for her Rizzoli and Isles series, but when we interviewed Tess Gerritsen in 2017, she hinted that “a standalone thriller that’s like nothing I’ve ever written before” was on its way. Well, it’s arrived. And boy, is she right!

I’m so trusting of this author and her skills that I didn’t bother to read the blurb for The Shape of Night. So it came as a bit of a shock when I realised I was slap bang in the middle of a ghost story. Yes, you read that right – a ghost story! Gone are the sharply analytical skills of homicide detective Jane Rizzoli and medical examiner Jane Isles; instead, meet Ava Collette, a cookery book author who has writer’s block and a big, bad secret.

Her cure for both is to leave her home in Boston and travel to Tucker Cove in Maine with her cat Hannibal, to rent a house and get her darn book finished. Her home for the next few months is to be Brodie’s Watch, which sits on a hilltop overlooking the sea.

It’s a slightly forbidding place and on first acquaintance Ava begins to regret her decision to rent. But then Brodie’s Watch begins to works its magic on her, she finds inspiration and begins to write chapters for her long-overdue cookbook.

The Shape of Night is quite a departure for an author who usually sticks to a more believable story arc. Here, there’s a spooky sense of unease lurking in every turn of the page – an unsettling sensation that’s in keeping with the book’s storyline.

As to the crime element? Early on, a woman’s body is pulled from the ocean that borders Tucker Cove. Her body is in a mess and it’s hard to identify her, but the discovery plays in Ava’s mind and as she digs deeper into the history of the property she is calling home for the summer, she begins to realise that there could be a connection between the death and Brodie’s Watch. I think most readers would be ahead of her at this point, and perhaps, like me, they may begin to piece it all together.

This is the most un-Tess Gerritsen Tess Gerritsen book I’ve ever read. It has touches of Daphne du Maurier’s Rebecca and SJI Holliday’s The Lingering, but little of the incisive, snappy Gerritsen style that we’re used to. Instead, prepare for an atmospheric if slightly meandering read, where ghosts take precedence and the crime comes as something of an afterthought. I enjoyed the setting, which is lovingly rendered, and the palpable, almost cloying claustrophobia that is often part and parcel of a small town. There are some fine characterisations too, although a few dip over into the cliche department.

The Shape of Night is probably not a book for the Rizzoli and Isle brigade, but if modern gothic is more your style, then step right along! And I’d advise that you always read the blurb before committing to your next read…

For another crime novel with a difference, try Providence by Caroline Kepnes. Our guide to John Connolly’s Charlie Parker novels is also worth exploring.

Ice Spice Shares Video for New Song “Munch (Feelin’ U)”
Kaley Cuoco Addresses Whether or Not She Wants a 3rd Season of “The Flight Attendant”
Addison Rae and all your favourite influencers are on a new app, Flip – so what exactly is it?
‘Lisa Frankenstein’ – Carla Gugino and More Join Horror-Comedy from Writer Diablo Cody
Ashton Kutcher Says He’s “Lucky To Be Alive” After Rare Disease Left Him Unable to See, Hear, or Walk for a Year