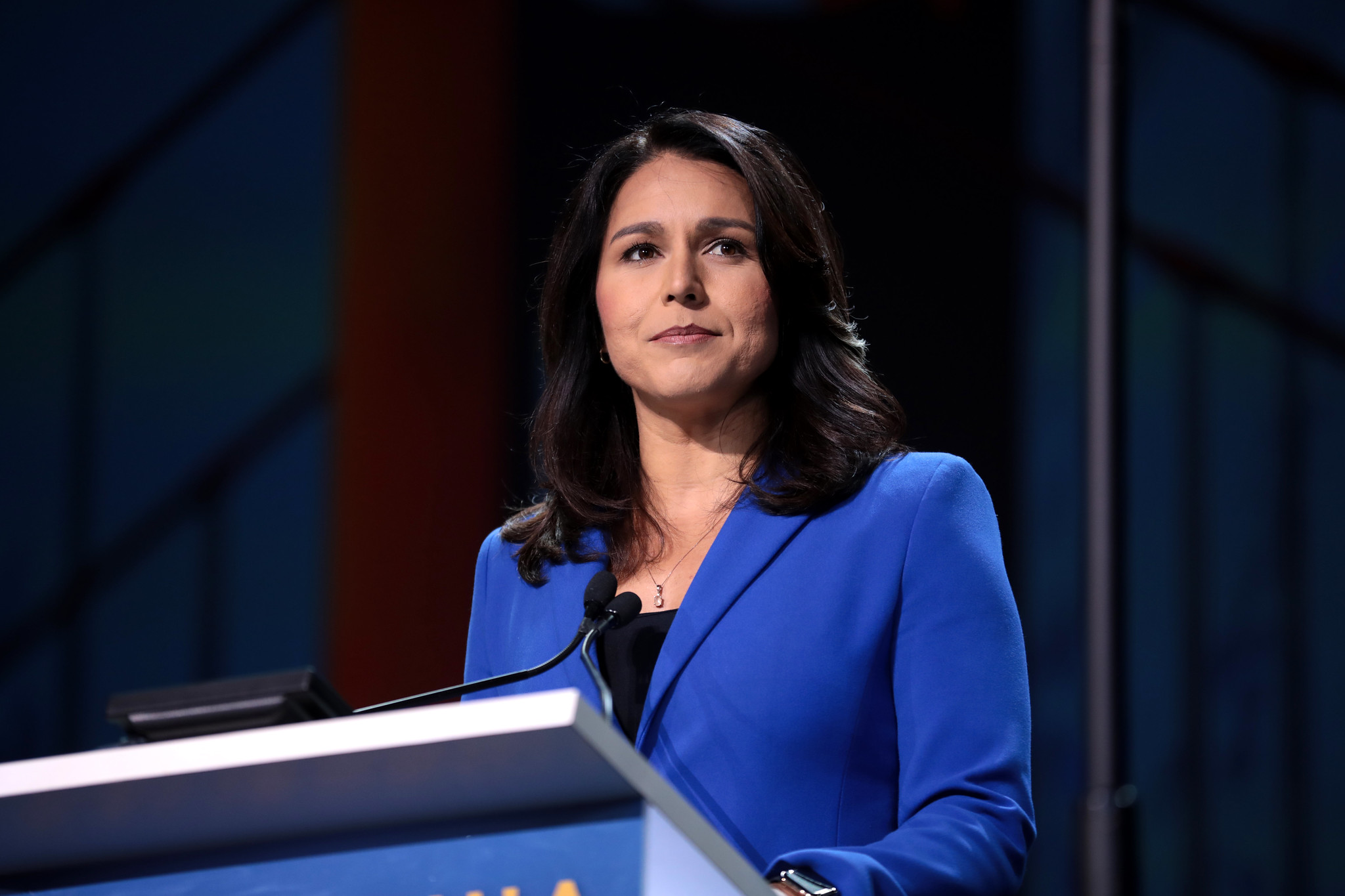 It’s easy to write off Tulsi Gabbard. The Hawaii congresswoman and 2020 presidential hopeful has been polling around two to three percent in an extremely crowded field, and the rumblings about her bad record on gay rights and controversial foreign policy positions have made her a hard sell for many. Even so, she’s a fascinating figure: a woman of color (she is Samoan), a veteran, and self-identified as Hindu – the first member of congress to do so. But she’s also divisive.

Gabbard has alternatively been seen as a rising star and a black sheep in the Democratic party, but she’s maintained enough support in her campaign to qualify for the next debate but hasn’t received the attention or public scrutiny of more visible candidates. But last week, when Gabbard initially opposed the impeachment inquiry into President Trump (she has since changed her position) it brought her back into the conversation – including her complex past and childhood entrenched in a right-leaning, Hindu-influenced religious group that many describe as a cult.

Gabbard was raised in Hawaii by her parents Mike Gabbard and Carol Porter Gabbard. She was born in American Samoa before they moved to Hawaii, was home-schooled, aside from a two years studying in the Philippines which she rarely speaks about. Her father served in the Hawaii state house before Tulsi followed suit and both campaigned against gay rights as one of their main platforms. According to an excellent and in-depth profile by Kerry Howley, published in New York Magazine, “Tulsi Gabbard Had a Very Strange Childhood”  a serious influence for all the Gabbards was an group best known as the “Science of Identity Foundation.”

Science of Identity was founded in the 70s by a white man named Chris Butler as off-shoot of the wider Hare Krishna movement, , who also goes by the guru name of Jagad Guru Siddhaswarupananda Paramahamsa. Butler grew a sigifigant following in Hawaii, and the organization was influenced by his own teachings and beliefs. To be clear, Butler and company do not identify as Hindu and the tenets of the group are a mixed amalgamation of various philosophies and Butler’s own beliefs.  According to New York magazine:

Butler taught vegetarianism, sexual conservatism, mind-body dualism, and disinterest in the material world. He taught a virulent homophobia, skepticism of science, and the dangers of public schools. He had been associated with Hare Krishna, and in fact claimed to have been given his Sanskrit name, Siddhaswarupananda Paramahamsa, by the founder of the Hare Krishna movement, but by the time he encountered the Gabbards, he’d started his own group. His teachings revolved around worship of Krishna but differed from those of Hare Krishna, in that he instructed his followers to learn from only a single guru — himself.

Gabbard’s family. according to interviews with Gabbard’s aunt and others, were part of this group, and it might have, among other things influence Gabbard’s father’s virulent’s anti-gay stance in the 1990s when he was in the Hawaii legislature. Gabbard’s connection to Butler and his devotees has been questioned for many years, as has her parents‘. Publicly, Gabbard;s Father claims identity as a Catholic but admits to knowing Butler, while her mother was Secretary/Treasure of Butler’s organization until 2000.

The narrative of Tulsi Gabbard is that her viewpoints, especially her anti-gay and other stances, have evolved over the years, specifically after her post-9/11 service in the military. But beyond her parents connections, Gabbard remains tied to and therefore possibly influenced by the Science of Identity Foundation – because the group and Butler are very much still around. Gabbard’s husband, Abraham Williams grew up with Gabbard in the same Science of Identity Circles, and other members of her campaign are connected to the Butlers, including Sunil Khemaney, who New York Magazine notes “runs a business owned by Chris Butler’s wife, and former members of the sect say he is Butler’s right-hand man. Gabbard also appointed a Butler-adjacent health food store owner as her chief of staff.

Gabbard shuts down questions about her past and connections to Butler, often calling such attacks Hindu-phobic. To be clear: this topic is worth investigating not because Gabbard identifies as Hindu, but because the group that has and still does influence her life is a best defined as a cult.  The devotion to a single man, the indoctrination and control and the many extreme viewpoints Chris Butler espouse fit the definition of a cult very well, but it is a loaded word. Their appropriation of Hindu teachings and doctrines, amalgamated with their homophobia and high regard for authoritarianism is concerning, as is the possible influence of such a group on an elected leader.

It is worth noting that Tulsi Gabbard is not the only congress or Presidential candidate with ties to fringe groups. Fundamentalist Christians, new age motivational speakers and lying, failed business men are all in various positions of power or vying for them. There is no interview process for public office that disqualifies cult members or normal homophobic assholes, as we can see from all of American history.

When our current President is under the influence of the cult-like NRA and authoritarian dictators, does Gabbard’s family ties to homophobic Hare Krishna knock-offs matter?  It probably should, because when we look at and select our leaders, we deserve honesty and transparency and politicians free from any influences, religious, lobbyist or otherwise, that calls their judgment and ability to put the country first into question.  Gabbard continually shuts down and evades questions about this topic, but I hope she changes her mind, opens up and answers the questions being asked, so that the country she wants to lead has all the information.