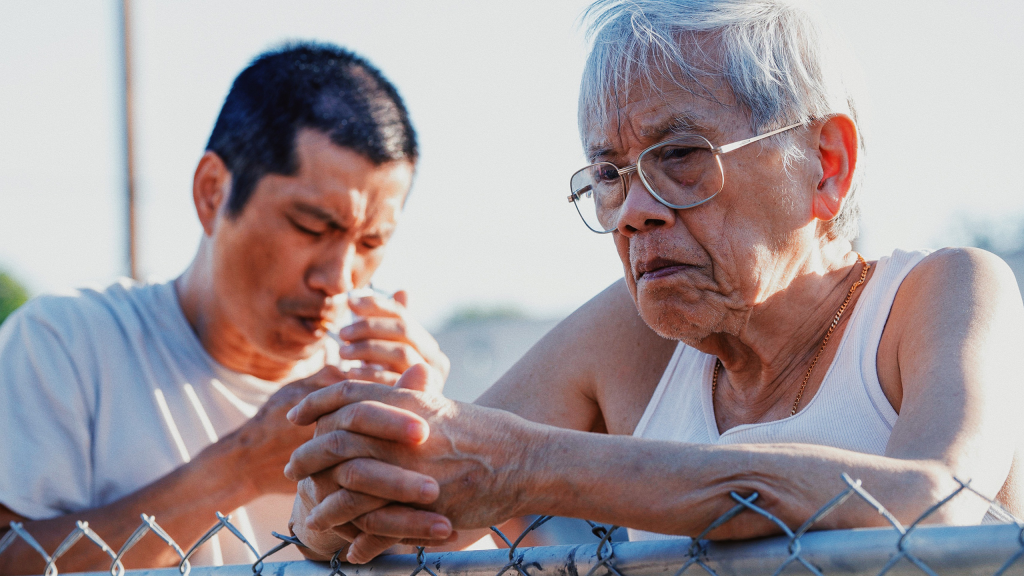 The Accidental Getaway Driver is one those rare, where-did-this-come-from films that every so often pops up to invigorate festivals and adventurous viewers on the lookout for something fresh and different. Generically, this is nothing new, a low-down gritty crime drama populated by cars, guns and desperate characters. But the movie, which premiered in the U.S. Dramatic Competition at the Sundance Film Festival, benefits considerably from being set in the rarely, if ever, filmed Little Saigon section of Orange County south of Los Angeles; a highly unlikely cast dominated by an octogenarian not looking for trouble; and, crucially, a noirish nocturnal milieu that injects the action with dread, even with a final stretch doesn’t really pay off with the kind of tension you expect from a crime drama. However, despite its lack of an exciting climax, this is a film that draws you in and offers sufficient satisfactions to attract genre aficionados and others keen to partake of some good new brew in an old bottle.

Poor old Long Ma. It’s late at night and the elderly taxi driver (Hiệp Trần Nghĩa) is already home in his small flat and tired out from a long day when he gets a last-minute call offering some good money. Obligingly heading back out into the night, he finds his three prospective passengers but is promptly kidnapped for his trouble and taken to a nearby motel room by desperate lowlifes who have just escaped from jail. The room is not the sort of place where you’d want to spend the night even without the criminals as company.

The no-good bossman is Tay (Dustin Nguyen), a youngish tough guy who loves to wave a gun around and has taken Long hostage to help facilitate the threesome’s escape. Old Long had enough of guns during the Vietnam War, from which he eventually escaped and fled to the United States, leaving his entire family behind. The rest of the characters here were far from behind born when all that happened but, for Long, the war and its consequences have been a lasting burden he will never shake. The stark contrast between the generations is pronounced and the fact that Long is once again facing the prospect of extreme violence after all the years is acutely upsetting.

Still, the self-styled gangsters have no intention of letting him go at this point, and the film slowly transforms from a hard-hitting crime yarn into something more sensitive and reflective. Understandably, director Sing J. Lee, who wrote the script with Christopher Chen, wants to examine the similarities and differences between the generations of Vietnamese and the violence that connects them. It also points to the coming moment when there will be very few Vietnamese remaining who have any memories of the war and the divided country that once was.

The impact and fascination the story holds slowly dissipates as the film continues; the shock and peril involved in the kidnapping don’t hold the same palpable threat after a while, and the final stretch feels akin to waiting for a long-floating balloon to come to its rest. Nonetheless, the film resonates in welcome ways due to its special setting and subject matter, unusual leading man, alert shooting style and perspective on connected but utterly different generations.