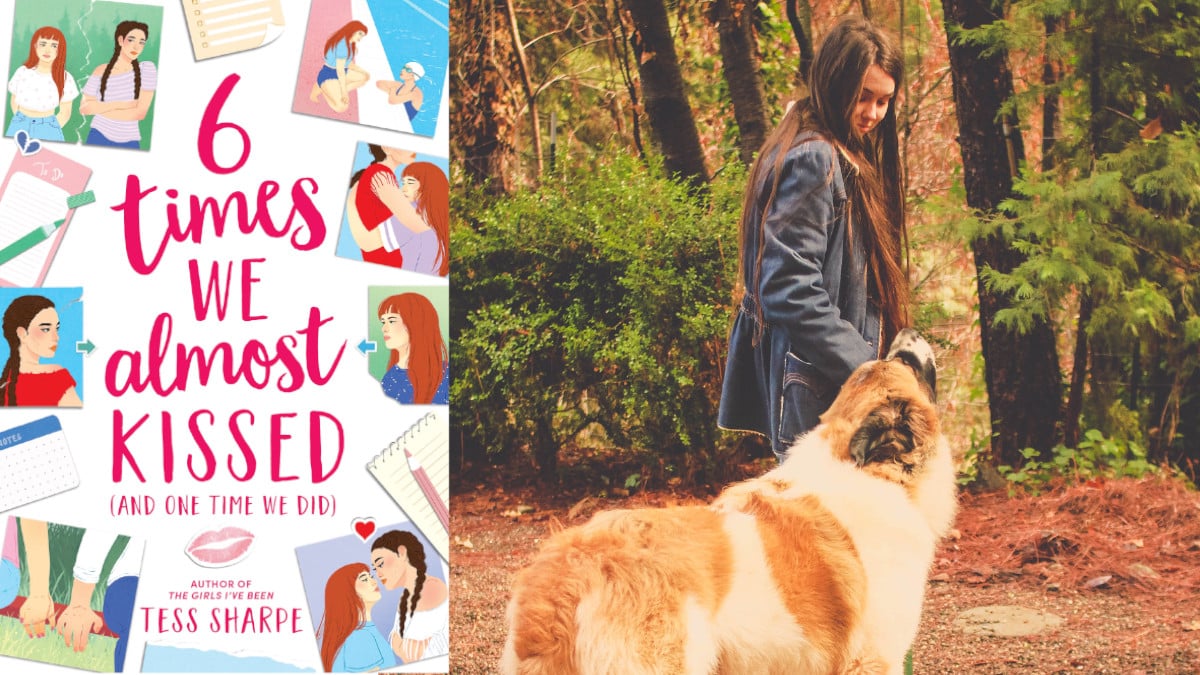 Tess Sharpe is off to a strong start in the New Year with the release of her latest YA novel, 6 Times We Almost Kissed (And One Time We Did). She already has a few hits under her belt, including All The Girls I’ve Been, which is being adapted into a feature-length film starring Millie Bobby Brown. In line with her previous works, 6 Times We Almost Kissed is led by dynamic queer female protagonists and tackles mature themes entwined with romance.

6 Times We Almost Kissed has a lot to unpack. On the surface, it is a fanfic romance tale of two girls with high romantic tension that makes readers wait for the elusive kiss. Under the surface, it is a very emotional, heartfelt, and relatable tale of two teens who were forced into adult roles at a young age. I had the opportunity to discuss 6 Times We Almost Kissed with Sharpe, via email, and she opened up about its fanfic premise, structure, and themes.

Rachel Ulatowski (TMS): 6 Times We Almost Kissed (and One Time We Did) has a bit of fanfic premise in that it makes readers wait for the elusive kiss. However, it also tackles deeper themes of grief, mental illness, and sexuality. Why did you choose to frame these topics with the overarching fanfic romance premise?

Tess Sharpe: I’m a very structure-obsessed writer and I’ve always wanted to write a novel structured around the “five times they almost…” fanfic structure because I think it’s so clever and I also knew it’d be really difficult to sustain such a structure over 80,000 words and I love a structure challenge. For a long time, I actually thought that I’d write a thriller inside the structure (maybe I still will!) But I was kind of burnt out on fictional murder and I really wanted to write a Romance because writing Romance novels hones you as a writer like nothing else. So, I remembered I had this Romance idea. I called it my “cross-generational Beaches” idea. About two girls who always clashed but whose lives were always intertwined because of their mothers’ epic friendship.

But when I looked at it through a 5 times structure lens, I realized in order to support the Romance and the structure successfully, I needed a lot of layers underneath it to support it. And as I started pre-writing the book to discover those layers, I realized that there was a lot of pain in these characters that wasn’t just about medical trauma. A lot of my pre-writing centered around Penny, who I had a lot of discovery with in that process. She didn’t walk into my head fully formed like most of my characters do. I went from “Okay, what is going on with you?” to “Oh, your Dad’s dead.” To “Oh, wait, it’s not just PTSD from the accident you’re dealing with, this is parental neglect and you have an undiagnosed Anxiety Disorder and OCD and absolutely no one is addressing it!” in that pre-writing process with her and it really informed the rest of the book.

TMS: Rafting isn’t a common sport like basketball or swimming. Why did you choose this specific sport for Penny?

Sharpe: I roomed with rafters in college who actually ran a business similar to the one Penny wants to develop in the book. I always knew Tate was going to be a swimmer so I kind of wanted to give Penny a sport that also involved water but wasn’t swimming. There’s so much commonality between Penny and Tate when you zoom out—everyone sees it but them because they can’t zoom out—and giving them sports that both involved water was definitely part of that.

TMS: While Penny’s and Tate’s connection is at the forefront of the book, Remi and Meghan also receive a subtle but sweet relationship storyline. What inspired you to add their relationship and how did it contribute to the overall story?

Sharpe: I love secondary couples in Romance as a reader and I really wanted to do that here, too. Plus, as a writer, when you’ve got two characters so in denial about their chemistry and feelings or ability to be together, you’ve GOT to get some outside perspective to hope! I loved writing Remi and Meghan’s exchanges, and doing them in text-message form was definitely an ode to text-fics which I think are so inventive and fun.

At one point in the story, Penny talks about how Remi and Meghan are “cinnamon roll good” while she and Tate are “wounded.” Can you tell us more about these definitions/labels? Can people be both wounded and cinnamon roll good?

Sharpe: I think Penny is being a little cynical here, but I think she kind of deserves to be. Remi and Meghan haven’t been forced into the adult roles that Penny and Tate have been. And I think they both know that, which is why they try so hard to be Penny and Tate’s village.

Part of being “cinnamon roll good” I think, is recognizing that because Remi and Meghan have steady support systems, they can be a support system for Penny and Tate, who don’t have that safety net because they’re already being the safety net for their moms. Recognizing the differences of their circumstances and working to do what you can to help is really emotionally sophisticated of them and also very sweet.

Penny and Tate have operated under tremendous threats of loss basically their entire lives. Tate grows up deeply aware of her mother’s fragile health. Even though Penny experiences her major loss as a teenager, as a child, she experiences Anna’s cancer battle alongside Tate. So from a very young age, both of these girls are dealing with really adult things and that really can leave wounds and create expectations of loss. And I think this is the big difference between the two sets of kids. How some things can make you not exactly cynical, but expecting the worse.

TMS: In the book, Penny’s mother belittles her mental health struggles. How do teens receive help when stuck in this situation and how do parents become more educated and understanding in this area?

Sharpe: It can be really tough, dealing with a parent who isn’t willing to take mental health seriously. Like Tate says in the book, if Penny’s mom was denying help for her physical issues, people would see it as a terrible thing. But because she’s denying her help for her mental health, it isn’t taken as seriously.

As a teen, seeking help via a counselor in school, within community groups, and using online resources and hotlines can be helpful until they are in control of their own health decisions.

As a parent, listening to your teen without judgment and understanding that seeking outside help and counsel is not an indictment on your parenting is really important. Sweeping things under the rug never helped anyone. And educating yourself about mental health will only benefit you, your kid, and your family in the long run.

TMS: Penny’s mother Lottie is a complicated character. She is extremely unlikeable due to her treatment of Penny, yet she does such a selfless act for Anna, and her grief evokes empathy. What’s your interpretation of Lottie, and do you see her as having redeemed herself by the end of the story?

Sharpe: Lottie is a very interesting character to me because she’s not totally evil like a lot of the parents in my books. She was a challenge to write because of that. Total evil is much easier to write! Lottie is so hurtful and neglectful to her daughter, but the root of that neglect is in very real trauma. She loses her partner in life, her soulmate, the father of her child, and the person who anchors her. She has no idea how to function outside of a unit or team. But as she slowly starts to heal from that trauma, she cannot accept her role in how reacting to that trauma perpetuated much more trauma on her child. And so she’s stuck in a cycle of neglect because to acknowledge it means you have to actually deal with not just the original trauma, but the trauma she’s caused. And Lottie is really bad at dealing with things.

I don’t think Lottie is redeemed. Her child had to break the cycle for her, she couldn’t do it herself. I think Lottie has a really long road ahead of her and she needs a ton of therapy. The question is: does she get it? And I think that answer is up to the reader. Is it enough that Penny breaks the cycle for herself? That she gets the help she needs and sets the boundaries that work for her? Or does she need her mother in her life? Is that healthy for Penny? Because ultimately, that’s the goal: a healthy Penny.