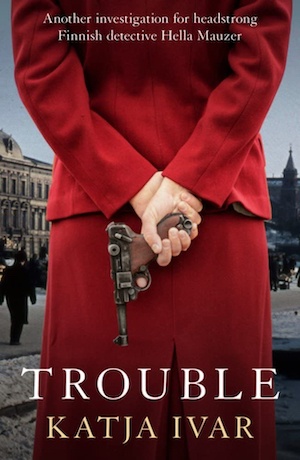 Following Evil Things and Deep as Death, Trouble is the third novel in Katja Ivar’s series about the Finnish detective Hella Mauzer. Set in Helsinki in 1953, it’s a procedural with hints of a Nordic noir atmosphere to it, a touch of espionage as the Cold War is in progress, but it’s very much a book about a progressive young woman finding her place in the world, fending off prejudice and uncovering injustices large and small.

Events in the previous book, Deep as Death, have been a setback for Hella Mauzer. She was seriously injured and she has left her role as a police detective. However, her police chief, Jokela, has been in touch. He has some freelance work for Hella, and wants her to run some background checks on a man called Johannes Heikkinen. A key figure in Finland’s intelligence service, SUPO, Heikkinen has applied for a role as a chief investigator with the police. Jokela thinks it might be a rubber stamp exercise but wants to make sure due diligence is followed.

Hella’s not particularly motivated but she agrees to it, for a fee but mainly hoping Jokela will give her access to the police files on her family. Her mother, father, sister and nephew were killed in a hit and run during World War II. It is from her father that Hella gets her inquisitive nature. Like Heikkinen he served in Finland’s intelligence service, but was about to retire when he was killed.

Heikkinen’s story is a tragic one. His wife died in a fire at their home not long after the death of their infant son. As she looks into it, Hella finds out that Heikkinen’s wife suffered from depression and that his cousin, a poet called Viekko Aalto, was a friend of his wife. Today, Aalto is considered a madman and to Hella it seems something’s not right about the whole thing. As she starts digging, cryptic messages are left at her home – the empty, maudlin house she has inherited from her parents. She starts to think she’s being followed.

The story Katja Ivar tells is guided more by Hella’s thoughts and feelings, than the case, per se. She works diligently at it but it’s not her main focus. Memories of her family swirl in her mind and in her dreams. She has recently split with her boyfriend, Steve, an American who was married but is leaving his wife to be with Hella. And she’s constantly disappointed by men who keep saying that her place is in the home and question the fact that she hasn’t married or had children. Former colleagues, people she interviews for the case, suspects as they emerge – they all underestimate her.

What she really wants to find out is what happened to her family, and why. This tragedy is where the book heads and she starts to make headway, putting together bits of information she gets from Jokela, Heikkinen, her father’s old colleague Kyander and interesting new sources that you’ll find out about when you read the book. It all goes back to arrangements the Finnish authorities had with the Nazis during World War II.

In the middle of the book, there are times when it’s not clear where the story is heading or what the priorities are, and the narrative loses its impetus a little. The focus is often on Hella and how she experiences the world. That’s not entirely a bad thing, though. She’s careful and perceptive during conversations, and the dialogue is precisely written. It’s one way the author tunes you in to the mystery. Although she’s troubled, she’s also a quirky character who looks at life differently to her contemporaries and she’s good company through the ups and downs of a sleep deprived summer in Helsinki. She won’t conform, but she’s growing more aware of her need to get by in the world.

Just when you think things are fizzling out as one of the two mysteries she’s tackling is solved, the other springs to life at the end of the book and Hella comes up with a plan that she hopes will deliver justice for all. There are some big surprises at the end of the novel – and if you’ve fallen under Hella Mauzer’s spell, they will astound you. At just over 200 pages, Trouble is a quick read, but it has plenty of depth nonetheless and, even though there are two prior books in the series, the author does a great job of bringing you up to date without drowning the current storylines in detail.

Also see The Healer by Antti Tuomainen, set in a very different Helsinki but with a similarly captivating atmosphere.