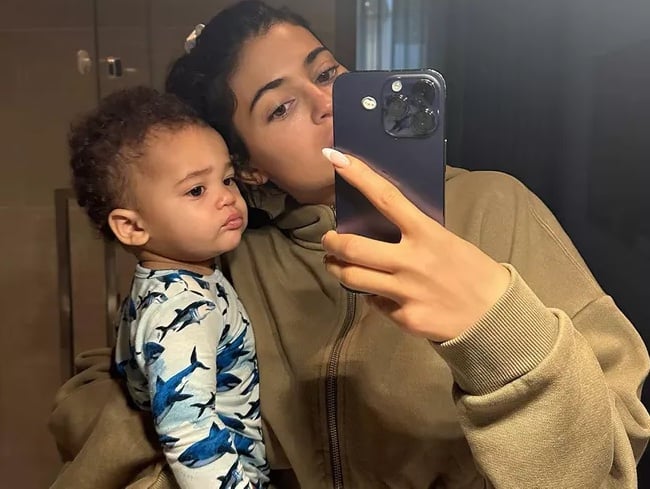 Kylie Jenner has officially introduced her baby boy to the world.

On Saturday, the 25-year old businesswoman and reality star gave social media followers their first true look at the second child she shares with Travis Scott.

According to a source, the name means “Lion of God.”

Jenner and Scott — who reportedly broke up just a few weeks ago — welcomed their son last February and initially named him Wolf Jacques.

However, the star shared on her Instagram Story on March 21 that her second child’s name “isn’t Wolf anymore,” adding at the time along with a prayer hands emoji:

“We just really didn’t feel like it was him. Just wanted to share because I keep seeing Wolf everywhere.”

After Instagram fan page @kyliesnapchat shared the news about the child’s new name, with the caption, “Do you think it’s pronounced air or airey?” Kylie remarked:

So that answers that question.

The Kylie Cosmetics founder also shares a daughter, Stormi, 4, with the aforementioned rapper, who has said very little in public about his famous ex or either of their children.

An insider recently told People Magazine that Kylie’s pregnancy with her son was “very different” than when she was pregnant with Stormi.

“After she had Stormi, she bounced back quickly. She was also resting more and took a huge step back by keeping her pregnancy to herself.

“As a working mom with a toddler, her pregnancy with Wolf was very different. She experienced more stress trying to balance everything,” this alleged person said.

Concluded this source, who is definitely a real person:

“[Kylie] wants to be honest about [her recovery]. She has help and is still exhausted.

“She has a great support system and is focused on taking care of herself too.

“She loves being a mom and wants to be the best possible.”