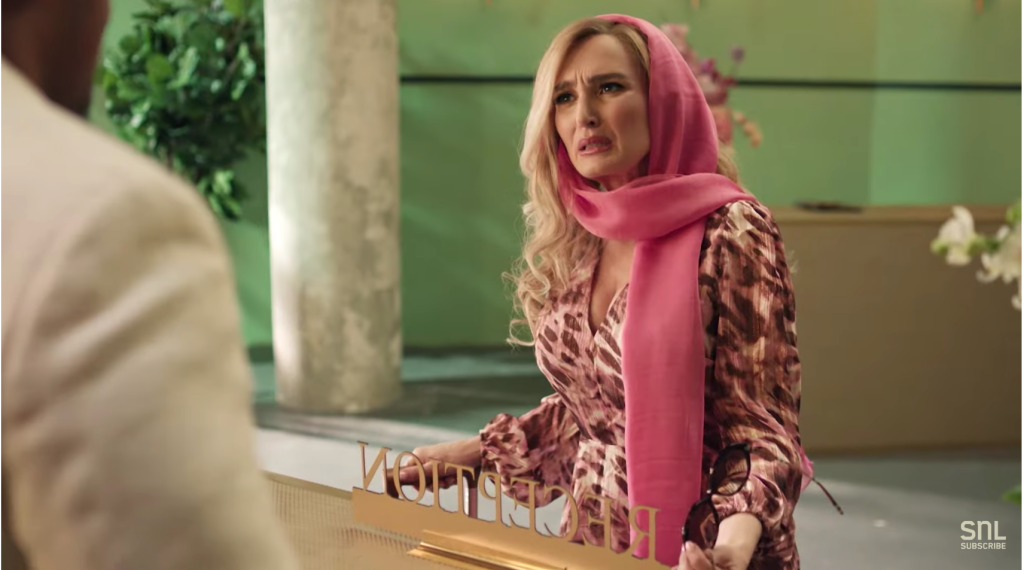 With The White Lotus star Aubrey Plaza as the Saturday Night Live host this week, a spoof of the popular HBO anthology series appeared inevitable. It came in the form of The Black Lotus, featuring
“eight wealthy tourists, one luxury hotel and a staff who has no time for this nonsense.”

Chloe Fineman reprised her spot-on Jennifer Coolidge impersonation, which drew praise by the Emmy-winning White Lotus star. However, Plaza did not reprise her role as Harper; instead, she played a new character, a bartender with a short fuse.

The skit largely spoofed the recent Italy-set second season of The White Lotus, including Michael Imperioli’s character Dominic, his son and the two local sex workers they got entangled with as well as Tanya’s (Coolidge) assistant Portia and her paramour Jack. There was also a wink to a mystery surrounding Plaza’s character Harper, whether or not she had sex with Theo James’ Cameron.

For good measure, the parody incorporated one of the most memorable scenes from Season 1, Jake Lacy’s Shane demanding the suite he had booked.

The White Lotus has had one major Black character so far, Natasha Rothwell’s Belinda in Season 1. With The Black Lotus featuring a Black hotel personnel, led by Ego Nwodim as the manager, the series will be “coming to HBO and Starz,” the SNL spoof teased, a reference to Starz’s focus on programming catering to Black audiences, including the Power franchise and BMF.

Watch the skit for The Black Lotus, which promises “all the decadence, all the intrigue, none of the foolishness,” above.