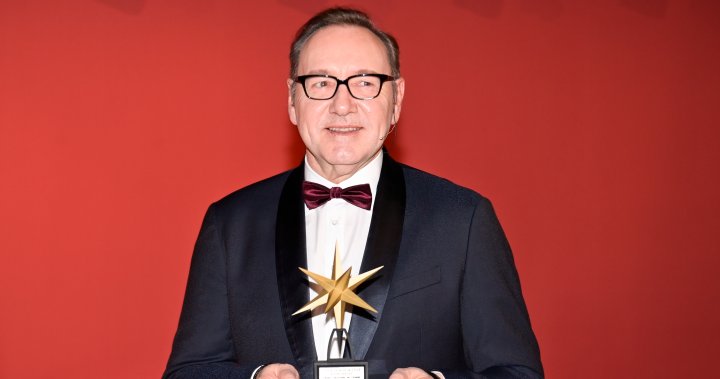 Kevin Spacey was honoured with a lifetime achievement award from the National Museum of Cinema in Italy on Monday.

The ceremony in Turin, Italy was the actor’s first public speaking appearance in five years, as Spacey has been mostly silent since numerous sexual assault allegations were made against him in 2017.

Vittorio Sgarbi, the undersecretary to the Italian Ministry of Culture, presented Spacey, 63, with the prestigious Stella della Mole Award at the sold-out event.

“Tonight, we’re witnessing Kevin Spacey’s comeback,” Sgarbi said, as per the Hollywood Reporter. “The one living through cinema is an immortal man, and it is precisely him that we are awarding this prize to tonight.”

Spacey thanked the Italian National Museum of Cinema for having “the courage” and “le palle” (meaning “balls”) to invite him to the event.

“By presenting this award, they are making a strong defence of artistic achievement and for that they should be applauded,” Spacey said.

He became emotional as he thanked his manager Evan Lowenstein, whom he called “the brother I never had.”

“It’s thanks to him that I realized I had to take all the setbacks and mistakes I made and get back on my feet, move on,” Spacey said. “It’s not just what he does for me: it’s what he does for his wife, his kids, his friends.”

Mexico bans smoking in all public places, including beaches and hotels

Spacey participated in a masterclass where he spoke with museum director Domenico De Gaetano about his career, which includes starring roles in the Netflix series House of Cards and the film The Usual Suspects.

“I’ve been doing this job for over 40 years, and I’ve only ever received kindness and support from my fans and co-workers,” he said. “I am honoured to be part of this process.”

Following the masterclass, Spacey introduced a screening of the 1999 film American Beauty, for which he won an Oscar in 2000.

Spacey told the Italian news agency Ansa that he continues to live a normal life, despite the allegations against him.

“I live my life each day, I go to the restaurant, I meet people, I drive, I play tennis, I’ve always met generous, genuine and compassionate people,” he said.  “I haven’t hidden away. I haven’t gone to live in a cave.”

In June, Spacey is expected to face trial in the U.K. for a number of sexual offence charges, including indecent assault, sexual assault and causing a person to engage in sexual activity without consent. Spacey has denied all of the allegations, which come from four men who accused the actor of assault between 2001 and 2013.

In October 2022, a New York court determined that Spacey did not sexually abuse actor Anthony Rapp when he was a minor.

Also last year, Spacey was ordered to pay a nearly US$31-million arbitration settlement to the makers of House of Cards after he was fired for the sexual harassment of crew members.

Since the allegations, Spacey has been working primarily in Europe. His film The Man Who Drew God premiered at the Torino Film Festival in December 2022. He will also star in Michael Hoffman’s Italian film Gore as American writer Gore Vidal.