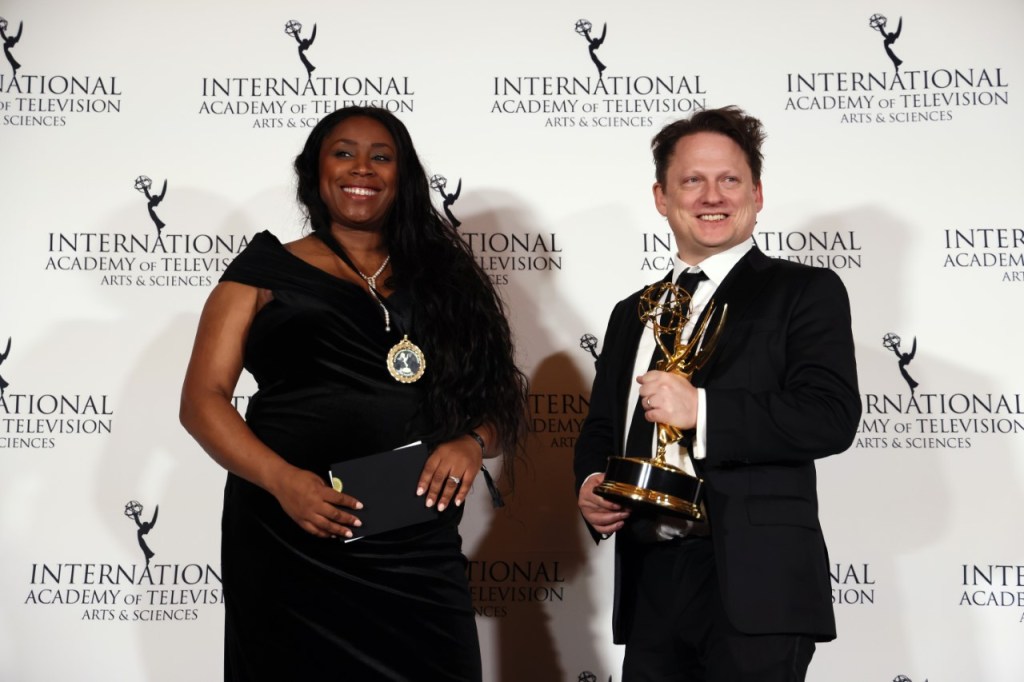 Welcome to Deadline’s International Disruptors, a feature where we shine a spotlight on the key executives and companies outside of the U.S. shaking up the offshore marketplace. This week, we’re talking with James and Soleta Rogan, the founders of prolific UK documentary indie Rogan Productions, with past credits including Black Power, Stephen: The Murder that Changed a Nation and Netflix’s My Daughter’s Killer. The pair discuss a rollercoaster 10 years in which they have secured multiple BAFTAs, worked with Steve McQueen and are now winning big business from the streamers.

The 2018 Grierson Awards – Britain’s most prestigious ceremony in the documentary-making calendar – will be remembered for a heartwrenching moment when Baroness Doreen Lawrence spoke beautifully about the legacy of her son Stephen, as she collected two gongs for BBC documentary Stephen: The Murder that Changed a Nation.

Lawrence was introduced on stage by a softly spoken EP named James Rogan, the co-founder of the three-parter’s co-producer Rogan Productions. He was visibly emotional as he gave way to Lawrence to speak about her son’s murder – a crime that upended UK race relations and unearthed institutional racism within the police force – and his giving way spoke volumes about the way in which Rogan Productions has platformed voices during its decade dominating the UK doc sphere.

Founded in 2013 by Creative Director James and his wife, Managing Director Soleta Rogan, Stephen Lawrence is one of a string of subjects this prolific, multi-award-winning producer has spotlighted, along with the likes of Vladimir Putin, Freddie Mercury and Frida Kahlo, while the company has most recently been working with Oscar-winner Steve McQueen and making docs for Netflix including My Daughter’s Killer and a fledgling series on the Euro 2020 Wembley final.

In 2013, James was freelance with a healthy roster of credits to his name while Soleta was working in the beauty industry when, driven by a desire to platform diverse, distinctive perspectives, the pair set up Rogan Productions. Nowadays, few within the docs world are unaware of them.

“I was pregnant with our first child and instead of feeling like I wanted to lie fallow it became like a stick of dynamite where we just wanted to go for it,” Soleta recalls when we sit down in Soho in early December. “James made two films the year before our son was born and we made 15 the following year.”

The company has since catapulted from the Rogan’s living room to a 36-person London office alongside a recently-opened Glasgow hub.

Even more crucially, James and Soleta have slowly engineered the true meaning a ‘Rogan production’, the unique feel that distinguishes their films from others in a crowded market. So how do they go about creating that feel and picking their subjects?

“Emotional range is the thing that is most unusual about our films,” says James. “Lots of people tell stories well but the key distinction for us is that we always come from a distinct perspective – and often that’s diverse.”

When pondering who to platform, the pair consider personalities who appear in people’s lives in passing with regularity but in ways that we may not necessarily realize.

“Putin and Freddie Mercury are great examples of this,” adds James. “Most people will hear a Queen song once a week or read about Putin almost every day. And with someone like Stephen Lawrence you will see a debate fashioned by his murder on an almost daily basis. So it’s about keying into that.”

Soleta, who looks after the business side but has a hand in creative, plays by one simple rule: “I need that flash of emotion. Even if a doc is sellable, it’s hard to get excited if I feel nothing.”

The pair don’t only spotlight single subjects, however, and in what felt a career pinnacle, they worked with Steve McQueen on a duo of 2021 documentaries entitled Uprising and Black Power: A British Story of Resistance, which acted as neat companion docs to McQueen’s celebrated BBC/Amazon Prime Video anthology Small Axe.

The former covers several tragic events that shocked Black Britain in the early 1980s including the New Cross House Fire and Brixton Riots, while the latter showed how the civil rights struggle in the U.S. inspired activists to take a stand. In what was a Rogan-dominated 2022 BAFTA TV ceremony, both shows were nominated alongside Freddie Mercury: The Final Act (itself an International Emmy winner), with Uprising winning for Best Factual series.

Oscar-winning 12 Years a Slave auteur McQueen was the most well known creative Rogan had worked with to date.

“Steve’s reputation precedes him,” says James. “One of the advantages of working with him is that the caliber of what he’s done in the past sets a bar. The ability to bring the story of the New Cross House Fire into mainstream British consciousness was an opportunity we couldn’t pass up.”

For Soleta, working with McQueen, who made his name in scripted feature film, threw up a fantastic opportunity to “better understand scripted sensibilities and dramatic purpose.”

And this couldn’t have come at a better time. The barriers between drama and doc have been breaking down for years now and, at the recent Mipcom Cannes market, premium documentaries were the key talking point, with the likes of Cara Delevingne’s Planet Sex being shopped just as prominently as major scripted offerings such as Emily Blunt western The English.

James, who like McQueen started out in scripted helming 2004 short The Open Doors, isn’t surprised by the development and believes premium docs are filling the void created by the collapse of indie cinema.

“People are talking about Uprising or Freddie Mercury in the way they used to talk about [scripted] features,” he adds. “Drama is all emotion but can lose sight of the context – the brain is a secondary consideration over the heart. But docs can be as emotional as drama yet with an intellectual backbone.”

This is one of the driving forces that gets the pair out of bed in the morning and Rogan’s current slate is as diverse as ever.

Shows incoming include the BBC’s Frida & Diego, one of the first to emerge from the Scotland hub that examines iconic artist Frida Kahlo’s relationship with Diego Riviera, along with a doc on Deaf Strictly Come Dancing winner Rose Ayling-Ellis and a show about alleged South African murderer Gerhard Jansen van Vuuren titled Original Sin. Add to that two Netflix offerings – true crime single My Daughter’s Killer and an upcoming program on the Euro 2020 Wembley Final – and you begin to understand just how many thematic bases Rogan are covering.

But the couple never stop looking back and communicating with past subjects (we speak a week before they are due to meet Doreen Lawrence to discuss her Stephen Lawrence Foundation) and duty of care is of utmost importance.

“I cut my teeth in the Noughties when there was this industry-wide disdain for contributors,” says James. “My test is to ask a documentary maker whether they would allow themselves to be filmed in the same way as their subjects and those who say ‘no’ need to take a long, hard look in the mirror.”

On keeping up with contributors long after filming has wrapped, Soleta adds: “Who the hell would we be to dig around in people’s pain and then just walk off?”

The same rules apply to those working below the line and James grows visibly emotional when revealing he has twice had PTSD after filming. “As a director you’re supposed to have all the answers so it can be difficult to put your hand up and talk about this stuff,” he adds, stating that he wants a “positive conversation” over how best to tackle these issues.

Deadline’s interview takes place the week before Netflix launches Harry & Meghan, the doc series that spawned hundreds of critical pieces targeting the Duke and Duchess of Sussex including one using violent and misogynistic tropes from Jeremy Clarkson that is now the most complained about British newspaper article of all time.

Clarkson this week issued a lengthy apology but Soleta thinks his the nation’s ire towards Prince Harry and Meghan Markle speaks worrying truths about where we are.

“I don’t know Harry or Meghan but I think it’s uncomfortable for us as a society to have a mirror held in front of us,” she adds. “A lot of people took there leaving the country very personally and you just have to wonder why these people are so upset.”

James and Soleta are full of praise, however, for the way in which Harry & Meghan commissioner Netflix and the other U.S. streaming services have “pushed the craft level up” in the world of doc-making.

Talented former BBC commissioners such as Storyville’s Kate Townsend have moved to Netflix and are doing “really innovative things” and James only sees a benefit to the wider British ecosystem, which had in the past been dominated by the BBC and Channel 4 but is now showing evidence of a “symbiotic relationship” between broadcasters and streamers. Townsend, for example, was involved with both Oscar-winning BBC Storyville doc Man on Wire and Netflix smash The Tinder Swindler.

James points to other high-profile examples such as Ricky Gervais, who broke out with BBC hit The Office and went on to helm Netflix’s Afterlife, or Olivia Colman, journeying from Channel 4 cult comedy Peep Show to the same streamer’s The Lost Daughter via Film 4-funded Oscar winner The Favourite.

The British government, has, however, failed spectacularly to spot this link, the Rogans believe.

The pair are huge British broadcasting champions and are furious with a Conservative Party they feel is wilfully ignorant of the pubcasters’ national contribution. BBC funding is under threat due to the freezing of the license fee, Channel 4 privatization is still dominating the media conversation (we speak prior to the sale u-turn) and both institutions find themselves regularly under attack from the Conservatives.

“Channel 4 has had more Oscar nominations than Netflix in the past 10 years and yet somehow the government suggests its model isn’t working,” adds James. “Failing to understand the power of the public broadcasters is myopic and undermining them with constant attacks hurts the whole nation.”

This emotive defence of the public broadcasters is testament to everything the Rogans stand for and, over the coming years, they believe the sky is the creative limit.

“If you keep looking for interesting perspectives and have a strong sense of purpose then the stories are limitless,” muses James.

“You can wake up one day and within minutes be speaking to someone at the center of a national or global story. This is quite literally the best job in the world.”