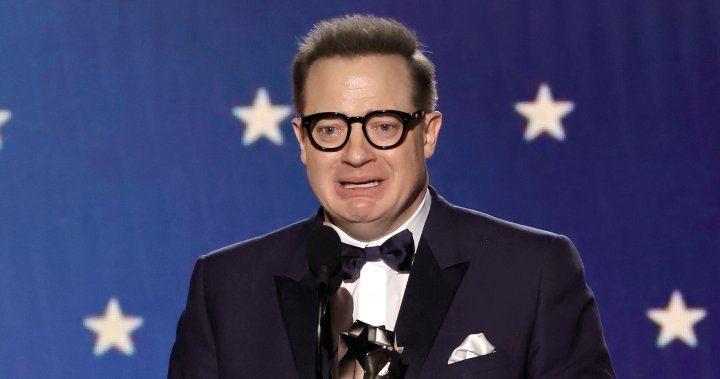 Brendan Fraser delivered a passionate speech after he took home the Best Actor trophy at the Critics Choice Awards for his starring role in The Whale.

The much-beloved actor accepted the award during Sunday night’s ceremony, beating out a number of other titan performances, including Austin Butler, nominated for Elvis, and Colin Farrell, who was up for The Banshees of Inisherin.

Fraser, 54, began to cry when his name was called. After he was handed the award on stage, Fraser referenced American writer Herman Melville.

“It was Herman Melville who once wrote that there are only five critics in America — the rest are asleep. I don’t know what it means, either, but I’m sure glad you woke up for me,” he said.

Fraser then spoke directly to The Whale director Darren Aronofsky, who previously said it took 10 years to cast the right actor in the film’s leading role.

“Darren Aronofsky, I was in the wilderness, and I probably should have left a trail of breadcrumbs, but you’ve found me,” he said. “And like all the best directors, you merely just showed me where to go to get to where I needed to be.”

He said The Whale, which marked Fraser’s triumphant return to Hollywood, is about “love,” “redemption” and “finding the light in a dark place.” He also praised his co-stars Hong Chau and Sadie Sink.

As music began to play Fraser off the stage, he concluded with a powerful message about perseverance.

“If you, like a guy like Charlie, who I played in this movie, in any way, struggle with obesity, or you just feel like you’re in a dark sea… I want you to know that if you too can have the strength to just get to your feet and go to the light, good things will happen.”

Recession will be ‘deeper’ than first thought, but job loss will be minimal: Deloitte

The Whale follows Charlie, a 600-lb. man, who tries to build a relationship with his estranged daughter Ellie, played by Sadie Sink.

After accepting his award, Fraser, who was still visibly emotional, told reporters that the Critics Choice honour meant “more than I know how to say with words.”

Fraser is expected to be nominated for an Oscar for The Whale. When asked what a potential nomination would mean for him, Fraser joked that he would have to get another suit.

“It would mean a lot to me, like any other actor who dared to hope and to dream,” Fraser said.

On Tuesday, Fraser’s performance in The Whale lost to Butler’s portrayal of Elvis Presley for Best Performance by an Actor in a Motion Picture (Drama) at the Golden Globes. Fraser himself was not in attendance, having said prior that he would skip the event after he claimed he was sexually assaulted by Philip Berk, a former president of the Hollywood Foreign Press Association (HFPA), the group that organizes the Golden Globes.