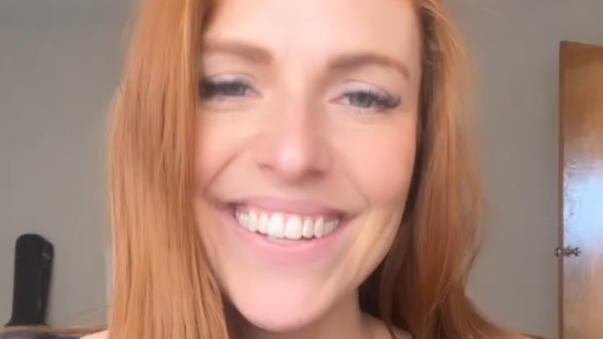 For the longest time, Little People, Big World fans have been noticing that Audrey and Jeremy Roloff’s lives are full of drama.

Leaving the show didn’t change that. It didn’t stop the feuds or the social media controversies.

Now, Audrey is once again in hot water with her own fans and followers.

They feel creeped out after Auj posted a private photo of her husband. Boundaries, please!

Audrey Roloff is under fire for the photo that she posted, below, of Jeremy Roloff.

In the pic, their precious little cat, Aspen, is cuddling with him.

Aspen’s pose is so endearing that Auj could not resist snapping a photo. But there is something off about the image:

Don’t worry; there’s nothing “indecent” about the pic — nothing violating Instagram’s stuffy, backwards rules about the human body.

Audrey is something of a fan of hyperconservative tradlife values, so she wouldn’t want to post anything intimate anyway.

Audrey clearly recognized the issue with the photo when she chose to share it. But she powered on through and posted it anyway.

“Sorry Jer,” Audrey wrote on the pic alongside a grinning emoji.

“But,” she continued as if to explain, “this little armrest was too cute last night.”

So, by her own admission, she is intruding upon her husband’s privacy.

She did not merely photograph him in his sleep … which is unsettling enough on its own.

Audrey went so far as to then post that photo on social media, for thousands upon thousands of people to see.

Social media users have been weighing in on Audrey’s apparent decision to ignore her husband’s right to privacy.

“Woah, massive invasion of privacy. Taking pics when sleeping, in the bathroom, etc, you just don’t do,” one wrote.

A second asked: “Can you imagine not being able to sleep in your own home thinking your wife is sharing pictures with the world?”

“Why do people do this? Is this to be cute?” a third commenter mused.

A fourth then admitted that “I couldn’t imagine being married to someone who doesn’t respect your privacy. At any moment you could be put on display for a million followers.”

“That’s such an invasion of privacy,” a fifth marveled. “I’d be furious if my husband did that to me and likewise. It’s just very inconsiderate.”

That said, it is possible that Jeremy gave Audrey permission — either specifically, or in a broader sense.

Unfortunately, a lot of people do not consider the value of consent. Or they think that someone who raises the issue is being a spoilsport instead of, you know, standing up for what’s right. But these things do matter.

It is difficult to give Audrey the benefit of the doubt, here. Considering the sort of person that she has chosen to be, can we assume that she sought Jeremy’s permission?

Priscilla Presley contests validity of Lisa Marie Presley’s will
46 Balayage Hair Ideas And Common Questions, Answered
Dave Bautista Is Giving Up On His Dream of Playing Bane
Rihanna “Pregames” Her Super Bowl Halftime Show in New Teaser
‘Avatar: The Way Of Water’ Moves Up To No. 4 Biggest Movie Ever Global, Leaving ‘Force Awakens’ In Its Wake