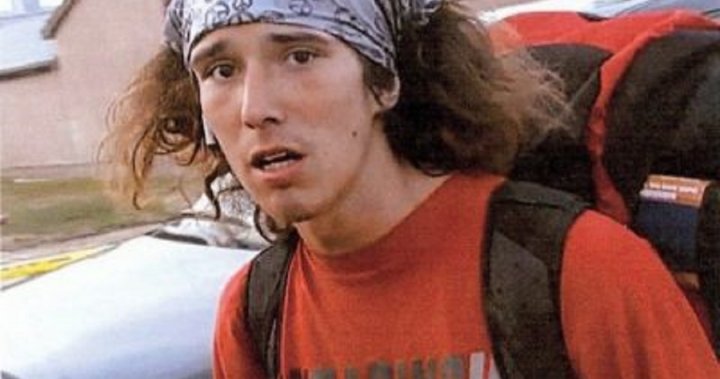 NOTE: Some of the videos in this article contain offensive language and content. Please watch at your own discretion.

Netflix’s latest true crime offering, The Hatchet Wielding Hitchhiker, probably rings a bell if you spent any amount of time online 10 years ago.

The documentary focuses on Kai Lawrence McGillivary’s overnight internet celebrity status, which quickly spiralled into an arrest and a murder charge.

According to Netflix, the documentary “chronicles a happy-go-lucky nomad’s ascent to viral stardom and the steep downward spiral that resulted in his imprisonment.”

The story made headlines worldwide in 2013 and drew particular interest in Canada because of Kai’s connection to Alberta.

Here’s everything you need to know about Kai, his crime connections and The Hatchet Wielding Hitchhiker.

The documentary focuses on a man who identified as “Kai” when he shot to viral fame in 2013, but his birth name is Caleb Lawrence McGillivary and he spent the early years of his life growing up in Edmonton.

Family members in the documentary reveal that no one called him Kai as a kid and it wasn’t until he moved away from Canada to become a nomad around the U.S. that he started using the name.

Kai became an overnight folk hero in February of 2013, after he was credited with saving lives when a man he had hitched a ride with pinned a utility worker against a pole with his vehicle and allegedly attacked a woman who tried to help the suffering worker.

To hear it in Kai’s words, which were caught on video by local news reporter Jessob Reisbeck and shared to YouTube the day of the incident, Kai said he hitched a ride with Jett Simmons McBride in Fresno, Calif. After McBride, an alleged white supremacist, pinned the worker during their ride, Kai jumped out of the passenger seat to hit McBride in the head three times with a hatchet as McBride allegedly tried to assault a woman who had come over to help the utility worker.

The bandana-wearing hitchhiker, then 24, gave Reisback an interview and became instantly famous for the line he used to describe his hatchet defence moves: “Smash, smash, SUH-MASH.”

“If I hadn’t done that, he would’ve killed more people,” Kai told Reisbeck.

Before he disclosed his account to Reisbeck, he prefaced the interview with what seemed like a positive and inspirational message:

“Before I say anything else, I wanna say no matter what you’ve done, you deserve respect. Even if you make mistakes, you’re lovable. And it doesn’t matter your looks, skills or age or size or anything, you’re worthwhile. No one could ever take that away from you.”

His quirky, surfer-dude delivery immediately endeared him to people on the internet and Reisbeck says that after uploading the video that night and going to bed, he woke up the next morning to half a million YouTube views.

Kai’s instant celebrity came with a dark side

People immediately wanted a piece of Kai, but it took some sleuthing to find him. Because of his nomadic, carefree and no-fixed-address lifestyle, Kai was not easy to pin down.

Reisbeck eventually connected with Kai for a followup interview and learned that he was a pretty talented musician.

Once Kai was back on the map, TV producers began to offer him opportunities. There were appearances on Jimmy Kimmel’s late-night show and Justin Bieber’s team reached out to him for a song collaboration after learning that a producer for Keeping Up With the Kardashians planned to make a reality show about him.

And although Kai seemed to lean into his overnight celebrity status, it became clear to those in his orbit that he was a bit of a loose cannon.

One minute he’d be strumming a guitar, and in the next he’d be peeing on Julio Iglesias’ star on the Hollywood Walk of Fame. He had no problem shoplifting from stores in the Bay Area, but would turn around and give the stolen goods away to other homeless people. He got kicked out of a hotel for making quick work of a bottle of Jack Daniels, flashing a knife and skateboarding in the lobby.

The internet remained crazy for Kai

Despite those who were closest to Kai having trepidations about his unpredictable behaviour and attitude, the internet remained fascinated by him, rooting for the loveable, catchphrase-ready nomad.

His long, untamed hair made him easy to spot and he was regularly solicited by fans for selfies and to appear in their videos — for which he often negotiated a trade, asking for a bottle of booze in return.

For those who couldn’t get a piece of Kai in person, they kept up his cult status with memes, songs and remixes, firmly planting him as one of the biggest viral video stars of the time.

Just three months after his star rose, it quickly came crashing down.

In May 2013, Kai travelled to New York and soon after arriving was arrested for the murder of 73-year-old lawyer Joseph Galfy. Galfy was found dead at his home in New Jersey, his head was bashed in and he was wearing only his socks and underwear.

During the investigation, police found a piece of paper with Kai’s number and name on it underneath a laptop in Galfy’s home. There was also a train ticket receipt that the police used to track down surveillance footage, which showed Galfy buying Kai a train ticket, and the pair hugging goodbye.

Alcohol consumption on the decline for Gen Z, studies suggest

Police tracked down Kai at a Philadelphia bus station and Kai confessed to the killing, alleging that he attacked Galfy in self-defence after the lawyer, whom he met in Times Square and offered him a place to stay, drugged and sexually assaulted him the night before.

Authorities, however, claimed Kai’s statements were inconsistent, that the sexual encounter was consensual and the violent murder premeditated.

After waiting six years in jail for the trial, Kai was found guilty of first-degree murder in April 2019. During the proceedings, he was combative during cross-examination and the judge called him “a powder keg of explosive rage.”

Kai was sentenced to 57 years in jail, with the judge telling the then-30-year-old: “When you become eligible for parole, you will still be younger than Mr. Galfy was when you murdered him.”

The court determined that he would have to serve at least 85 per cent of his sentence and while he appealed his conviction over instances of “misconduct, abuse of discretion and ineffectiveness of defence counsel,” his murder sentence was upheld by a New Jersey panel in August 2021.

Speaking to Inside Edition in January 2020 from prison, Kai said he didn’t realize he had killed Galfy despite his extensive injuries.

Kai’s mom, Shirley Stromberg, appears in the documentary to share her side of the story, saying that her son lied about being locked in a room for long periods of time as a kid.

Instead, Stromberg says she tried to keep her spirited young son safe in the mornings by locking his bedroom door — otherwise he would get up before her and get into dangerous situations. Stromberg also shared that getting her son help over the years proved difficult.

“Not really understanding what was going on, the medical field wondered if he had ADHD and things like that, but in the end, there wasn’t one diagnosis.”

In his 2013 interview with Reisback, Kai claimed that he didn’t have any family.

Prince Harry says memoir is about saving royals from themselves: ‘That worries me’

“As far as anyone I grew up with is concerned, I’m already dead,” he shared.

That cousin, Jeremy McGillivary Wolfe, tells the documentary team that hearing those words was devastating and that he still cares for his cousin. Wolfe says that he believes Kai had a difficult childhood and remembers him being prone to spells of rage.

“I honestly believe Caleb has mental issues because he seems well, but when it comes to a certain situation of pressure, you either become a diamond or you get crushed,” Wolfe said. “And in this case, Caleb gets crushed.”

Kai’s father, Gil McGillivary, shared with APTN that Kai had been a drifter since 2011.

McGillivary said his son didn’t get a proper education and spent time in a treatment centre as a child until he was 18 years old.

‘The Hatchet Wielding Hitchhiker’ is now streaming on Netflix Canada.